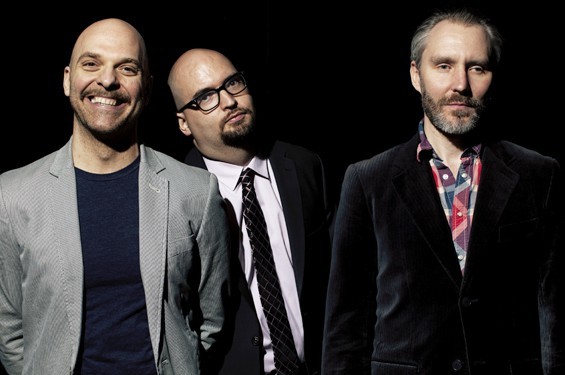 In what has become a yearly tradition, the Bad Plus and Cowboy Mouth both return to St. Louis to start off the year with multiple nights of music. From behind the piano, Mark Dew still holds the fort down several nights a week at the Hideaway, but we recommend paying the local legend a visit during what tends to be downtime after the holidays. Foam brings a solid midweek schedule while most of the major venues in town take an extended vacation. Returning to work won't be so bad when you have so many solid shows to look forward to.

Dog w/ Tubby Tom, Slave Cable, Mangina
Livery Company
9 p.m. | $5
By Joseph Hess
While "inbetweener" is commonly used to describe persons who don't quite meet the demands of society's common cliques, the term's musical application is much more fleeting. For when a band crawls out of the head space between two genres, people (and especially us music writers) jump at the chance to coin new categories. New York's Dog doesn't attempt to reinvent the wheel. Instead, the trio keeps its collective head stuck in a tire, rolling over sounds sourced from punk, garage and no-wave. By not committing, the band likely limits its audience, never to see a favorable 8.7 album review via Pitchfork or whatever. Dog makes something that vaguely resembles punk and does so with volume and vigor — minus the marketability.

Kirby Jayes w/ Bucko Toby, Hannah Rainey, Sleeping Cranes
Foam Coffee & Beer
9 p.m. | $5
By Joseph Hess
The Beloit Music House sits right outside Beloit College, a liberal arts school based little more than an hour outside Milwaukee, Wisconsin. The front room of this shared living space has housed many a folk musician, be it for lodging or an intimate house show. On his debut 716 Emerson, Kirby Jayes embodies that building, channeling its communal energy by merging song and story telling with a quick wit and an air of passing whimsy. If the lyrics here are any proof, the songs are as transient as Jayes' peers, as he ekes out the kind-of disposable Polaroids that never go out of style armed with only a six-string and a natural voice.

The Vanilla Beans w/ Single Player, Carte de Visite, Patrick Kablamo
Foam Coffee & Beer
9 p.m. | $5
By Christian Schaeffer
From this review of the Vanilla Beans' 2014 EP FFFF: Somewhere along the line, amid a flurry of releases and a steady stream of gigs on local stages, the Vanilla Beans became St. Louis' best electro-twee band. And that's not as narrow of a genre as you might think — the group marries simple pop dynamics (boy/girl harmonies, sing-song lyrics) with digital drum beats and burbling synth. It's a mix that's modern and timeless, befitting a band that reportedly bonded over a shared love of Daniel Johnston, but also quickly advanced past any kind of faux-naïveté — you don't write songs this catchy on accident. Last year the band issued its second full-length, the sixteen-track Don't Think It's Weird, as well as a split with Superfun Yeah Yeah Rocketship. For FFFF, Vanilla Beans issues a scant four tunes; luckily, they're all bouncy, danceable winners.

Staghorn w/ Pierre, Double God, Family Medicine
Foam Coffee & Beer
9 p.m. | $5
By Joseph Hess
From Staghorn Sets Out to Save the World One Song at a Time: "Staghorn ferns live in complete symbiosis with trees and need very little to live. They're completely self-sustaining, and a symbol of how mankind should be living with the rest of the world community," says Jared Scheurer, recent Florida transplant and founding member of Staghorn. His outspoken post-rock group takes an eco-friendly, DIY approach to every facet of its music. From its speaker cabinets, built from wood sourced in Missouri, to its hand-wired custom amps, the band pushes a holistic message through practice, not preaching.

The Bad Plus
Ferring Jazz Bistro
7:30 & 9:30 p.m. | $35
By Jessica Lussenhop
From Punk Princes of Jazz: The Bad plus is not a cover band: Twelve years after their first album together and many more than that since they first met in a suburban Minnesota junior high school, the members of the Bad Plus still reign as the punk princes of jazz. "Punk" is not meant to refer to appearance. There's the bookish pianist Ethan Iverson, lank and sleepy-eyed bassist Reid Anderson, and — well, OK, drummer Dave King is a little punk — but the influence is clearly there in the band's music. In 2001 the Bad Plus was declared by many critics the most exciting thing to happen to jazz, enthralling audiences through songs with amusing, robot-related back-stories and producing inventive covers of existing songs such as Aphex Twin's "Flim." That was a long time ago, and while the Bad Plus has matured considerably, its attitude hasn't tempered. Nor have the accolades. Iverson probably put it best when he once said the band had always set out to create something that people had never heard before. This mission statement still shines through in its music today.

Cowboy Mouth
Old Rock House
8 p.m. | $20-$35
By Christian Schaeffer
From the RFT Music archive: The list of singing drummers is a short one. Levon Helm, Phil Collins and Ringo Starr pulled it off with grace, but it's tough to keep the beat and work the crowd at the same time. Such multitasking has never hampered Fred LeBlanc, who has led Cowboy Mouth from behind his kit for the past twenty years. The New Orleans-based band is known for its party-starting concerts, but unlike its fellow Big Easy bands, Cowboy Mouth doesn't rely on funk, soul or brass-fueled arrangements. The band prefers a more straight-ahead rock & roll approach, with big guitars, bigger drum fills and LeBlanc's full-bodied (and often over-the-top) vocals.


SUNDAY, JANUARY 10
Mark Dew
Hideaway Restaurant & Lounge
8 p.m. | free
By Joseph Hess
The Hideaway feels like a brick-for-brick restoration of a rich swinger couple's basement circa 1961. The joint is no less classy on a Friday or Saturday night, but this Sunday offers a mellow reprieve from the previous nights. For many in south city, seeing Mark Dew around the holidays is a family tradition and this post-New Year's weekend offers many the chance to make up for lost time. His piano renditions of classics from the past eight decades are just the right kind of quirky, which mingles well when the regulars take the mic for a drunken duet. But take heart, young ones: This is a place where your cheesy dance moves will do just fine.