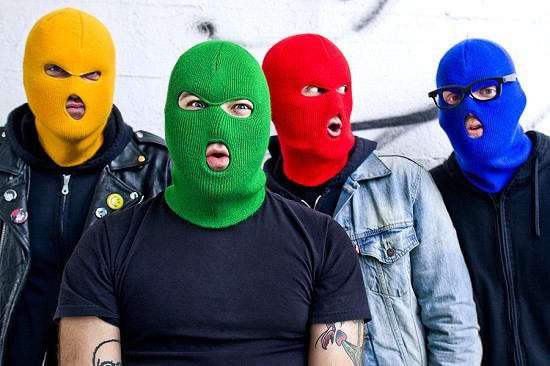 For the next seven days, take stock on the past year and realize how many stellar shows you missed. Greats bands still play to empty rooms every day and any self-respecting music fan should take precautions to ensure that never happens. If you make one new year's resolution, make it this: See more live music.

This list will help make you make good on that promise.

Soulard Blues Band
Broadway Oyster Bar
9 p.m. | $5
By Roy Kasten
From the RFT Music archives: One day, dear reader, the Soulard Blues Band will be no more. It's just a fact. And one day you'll wonder why, despite all the opportunities every other day of the week, you never saw this St. Louis institution in its prime — and no, the band's prime ain't over. If somehow you've never danced your ass off when Art Dwyer lays down a bass line as smooth as crushed velvet, or when Marty Abdullah swings his phrasing on "Kansas City Blues" or "Dust My Broom," or when Tom Maloney plays a solo that would make his mentor (the late, great Benny Smith) smile, well you really should. Don't take this band for granted. Pay your respects soon; they've been earned.

I Set My Friends On Fire w/ Arcane Haven, The Greater Good, Ascension of Akari, Our Last Words
Fubar
6:30 p.m. | $12-$15
By Joseph Hess
Before MySpace's rapid decline into relative obscurity, two teens from Miami, Florida struck internet gold when they uploaded a faux-screamo rendition of "Crank Dat" by Soulja Boy to the site. At 50,000 plays per day, even MySpace was suspicious of I Set My Friends On Fire, the second band from the then high-school aged Nabil Moo and Matt Mehana. But that boost was just one of many, what with the advent of YouTube and Tumblr culture fast-approaching. I Set My Friends On Fire funneled all that attention into a record deal and produced two full-lengths and several singles to boot. At the tail end of 2015, Mehana remains as the sole original member, bringing a new backing band on the road ahead of a third studio album, Caterpillar Sex, set to release in March 2016.

Samantha Fish w/ Delta Sol Revival Duo
Old Rock House
8 p.m. | $12-$15
By Roy Kasten
Kansas City native Samantha Fish is part of a vanguard of female blues artists whose guitar attack is as impressive as their vocal punch. On the tensile strength of this year's Wild Heart, Fish may have put herself at the most deeply-cutting edge of that movement. Working with a band of lightning greasers (including guitarist Lightnin Malcolm and just-as appropriately named drummer Brady Blade), Fish transforms the elemental Hill Country juke-joint style with classic-rock hooks, Southern soul and all the pyrotechnics of Stevie Ray Vaughan. Best of all, her songwriting matches the snarling force of the music. Fish doesn't rock the blues by rote; she does it by instinct and craft.

Masked Intruder w/ the Fuck Off And Dies, the Haddonfields, the Humanoids
The Firebird
9 p.m. | $18-$20
By Daniel Hill
From this 2013 show review: Madison, Wisconsin's favorite band of law-breaking pop-punkers played Cicero's last night, encouraging attendees to be careless with their valuables and to wander freely into dark alleys after the show. Officer Bradford, the band's touring parole officer, made sure the band members were following the conditions of their supervised release while a crowd of a hundred or so pogo-ed, slammed and sang along.... Ramones-y four-chord chops and energetic sing-a-longs abounded throughout the night. The hook for "ADT Security" might be one of the catchiest things I've ever heard, and the band played it precisely despite the fact they had to be nearing heatstroke with those ski masks on. I was hot as hell wearing a light sweater. "This song is about how we love you so much, your security system can't keep us away from you."

Karate Bikini w/ Search Parties, Brotherfather
Off Broadway
8 p.m. | $10
By Christian Schaeffer
From this review of Karate Bikini's 2014 album A Simpler Sugar: Members have done time in bands reaching back to Lydia's Trumpet and Tinhorn through to the Bottle Rockets and Old Lights, so there's a host of guitar-driven rock to pull from in this lineup. On A Simpler Sugar, though, the styles are varied but focused on elevating Tim McAvin's lyrics. If anything, the new lineup adds a layer of lush instrumentation, especially in the way that Adam Frick's French horn lines sidle up to Michelle Rae's saxophone. For her part, Rae takes on a greater role on this LP, with her high harmony vocals often acting as an angel on McAvin's shoulder amid the guitar upticks on "Squeezeums" (her lead vocals on "K.N.U.C.K.L.E." are a bright spot as well).

Antithought w/ Sunwyrm, Ruz, Blight Future
The Firebird
9 p.m. | $7
By Joseph Hess
At this point, the punk set in St. Louis should know Antithought. The band has shared bills with the most prevailing names in the genre: The Casualties, Negative Approach, Anti-Flag, just to name a few. And if you consider yourself affluent in all things punk and have managed to miss Antithought, chances are you're the type who shows up late to avoid the openers because you can't be bothered to hear new music. Dust off those ears and check St. Louis' latest torch-bearers of rock done fast and loud. The proceeds from this night's gig go to benefit a refugee family, which is not only charitable, but a social statement. Musicians in St. Louis are sending a message: This city welcomes refugees.

The 3rd Annual Soul Soup Concert w/ JD Hughes and the Fuze, Hillary Fitz
Foam Coffee & Beer
7 p.m. | $10
By Joseph Hess
JD Hughes' easy-going sound implements a deceptive style of songcraft. Bite-sized pop rock can be opened and examined, like a Russian doll where style begets style and a close listen reveals layers. This year's edition of the Soul Soup Concert features songstress Hillary Fitz, who works as a solid counterpart to Hughes (backed up by his full band the Fuze) with a softer but no less direct approach. The proceeds on this night benefit Lend A Hand/Salad Days, a program put forth by Milque Toast Bar, a new restaurant on Cherokee Street (which just received a glowing review by RFT food critic Cheryl Baehr). Foam will also be accepting cans of soup, but this show encourages the good stuff — this is not your run-of-the-mill canned food drive.

Editor's note: We changed this post after it was published to reflect that the Antithought show has been moved to the Firebird. We also later changed the show for Tuesday, December 29 — our initial suggestion is happening on a different day. We regret the errors.