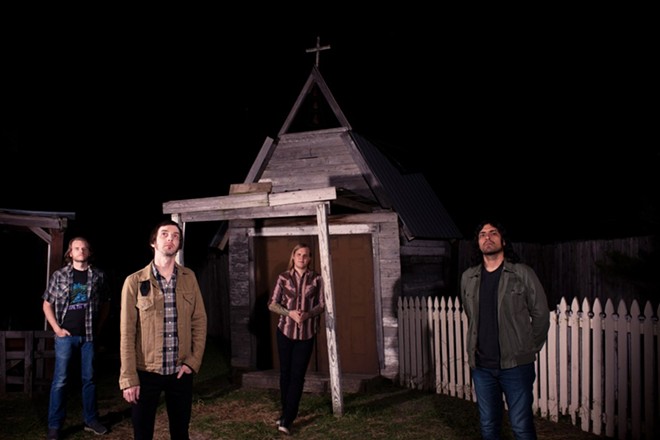 Heavy is as heavy does. And few do heavy like Austin, Texas' metal quartet the Sword.

For a metal band to be truly great, it has to contain an element of musicality that separates it from the pack. For all its posturing and attempts to stand apart from the mainstream, metal tends to stereotype itself very quickly. It’s way too easy to tune a guitar to drop-C, max out all the knobs on the pedalboard, purchase all-black clothing from the sales rack at Target and come up with the most evil-sounding name possible.

But fitting a mold has never been a concern for the Sword. On its fifth studio release, August's High Country, the band branches out even further from the sound it created with its 2006 debut.

“We just wanted to do something a little bit different without turning people on their heads too much,” bassist Bryan Richie says. “We were just trying to do 'us.' Not trying to make a record for anyone but ourselves, but at the same time trying to expand on what we’ve done already. Nobody wanted to go through what we’ve already traveled — nobody wanted to make an Age of Winters 2.”

Fans of the band have nothing to fear: The new album still relies on heavier-than-thou guitar riffs, mammoth in scope and expression, but with touches of sludge-blues and psychedelia added to the mix. Richie loves the end result; he is equally unfazed by its naysayers.

“For as much flack that this record has gotten for the change in direction, it’s not exactly a massive change in direction,” he argues. “I feel like we’ve definitely been foreshadowing the move we were going to make for quite a while with songs like 'Maiden, Mother, Crone,' and 'Tres Brujas.' Shit that was showing people tinges of things to come.”

If the Sword's aim was to zig when its fans expected a zag, High Country does just that. The El Camino groove of “Ghost Eye,” the road-trip ramble of “Turned to Dust” — for what it’s worth, this is very much a classically minded example of the genre, with equal measures stoner-metal ode and blues-rock ritual. Though Black Sabbath comparisons have always stalked the band, this iteration of the Sword sounds more like a backbreaking, lead-laden ZZ Top in rhythm, rock and tone. (Just listen to “The Bees of Spring” and try to argue.)

“That’s a pretty astute comparison,” Richie says. “I’m way more into that one than constantly getting compared to Sabbath, which I don’t think we sound like too much anymore.”

And because the band is such a workhorse, its members are already thinking ahead to the next record.

“I think that’s a natural progression on how the industry works,” Richie explains. “When you finish a record you end up sitting on it for months before it’s even released, and that allows you to start putting your head in other thoughts, other places. We did some stuff in our downtime and recorded a lot of new tracks acoustically, so we’re gonna see if any of that has some sort of life in it.”

An acoustic Sword album? One can almost hear the riffs already.

“You may get that option!” Richie exclaims, his excitement palpable. “We pulled it off on this new record with 'Silver Petals,' so we’ll see where it goes. The acoustic version of 'Seriously Mysterious' is absolutely sick, man. I hope people get to hear that one, cause that came out something special.”

In addition to prepping yet another new album, the members of the Sword are enthusiastic to be taking the music of High Country on the road. It’s been quite some time since the band played St. Louis, but its love of our city has not been lost.

A metal band from Texas that loves St. Louis BBQ? What could be heavier than that?