The Best Concerts in St. Louis This Week, December 7 to 13 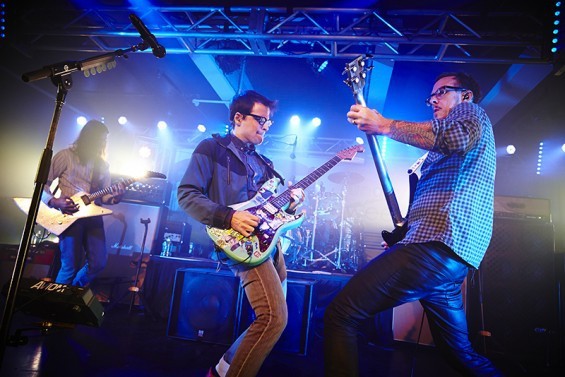 Typically we like to cover a wider swathe of styles on this weekly breakdown, but this week St. Louis is all about rock. No prefix or subgenre is spared, so if loud drums and six-strings with the occasional scream is your cup of tea, drink up. These next few days bring constant reminders of how great St. Louis is for music every night of the week. From hometown heroes like Greek Fire and Foxing to the unsung weekly shows of Mark Dew at the Hideaway Lounge, concertgoers can pick and choose from rowdy rock affairs or low-key covers of classic hits.

MONDAY, DECEMBER 7
Greek Fire w/ the Struts, Highly Suspect
The Pageant
8 p.m. | $20-$25
By Ryan Wasoba
From the RFT Music archives: With stage names such as Moon and Johnny Venus and constant compliment fishing on its Facebook page, make no mistake that the members of Greek Fire want to be capital "R" Rock Stars. The group is certainly on the right track with its forthcoming album produced by Goldfinger's John Feldman (the same guy who gave Story of the Year's Page Avenue its sheen) and a main-stage spot at Pointfest 29. The Feldman sessions have thus far yielded the single "A Real Life," which shows the band delving further into the glam nu-metal shuffle of its fan favorite, "Doesn't Matter Anyway."

Weezer w/ Wavves
Peabody Opera House
8 p.m. | $29.50
By Daniel Hill
The Weezer fan is patient. Over the course of a twenty-year career, the band that Rivers Cuomo built has showed constant promise but scattershot results. Most listeners and critics alike would agree that the band's first two albums represented its creative peak, and that subsequent efforts have been relatively hit-or-miss. After hundreds of songs — many of which were never officially released — and six lackluster records, Weezer finally released what many have dubbed its “third good album” with last year's Everything Will Be Alright in the End. The LP landed on many year-end best-of lists, including those of Kerrang!, Rolling Stone and Alternative Press. Years and years of waiting for your favorite band to come back around can actually pay off. Weezer proves it.

Bereft w/ Dibiase, Decay Crawler, Railhazer, Planet Eater
Fubar
8 p.m. | $10
By Joseph Hess
Just to clear up any confusion, this isn't the renowned Los Angeles outfit of the same name. Bereft shares not only a name with another beloved band, but this Madison, Wisconsin power trio also shares the same genre. Bereft carries an oppressive force of doom metal with patience, building songs that work in cyclical drones before snapping. The band's sense of discipline allows each song enough time and space to properly ripen, which ultimately makes for an overwhelming release of tension. The local lineup is built with mainstays in the metal scene, but keep your ears peeled for recent upstart Railhazer.

Black Panties w/ Lumpy and the Dumpers, Golden Pelicans, Bib, Wet Ones
Foam Coffee & Beer
9 p.m. | $8
By Josh Levi
From the RFT Music archives: Black Panties is a snotty punk riddle wrapped in leather and drenched in PBR. Originating as a one-man guitar assault, the project now most frequently evolves into a full-fledged band, complete with a human microphone stand and a rotating cast from St. Louis' independent music community. Donning a leather jacket, black ski mask and cool shades, the group's ever-mysterious frontman reeks of sarcasm as he sings songs like "I Don't Care About the Punx" and "Piece of Shit." With several outstanding recordings and a few rowdy tours across the Midwest and East Coast under its belt, Black Panties has proven that it's a force that can hold its own both on the turntable and the stage.

Yes We Can: A Tribute to Allen Toussaint
Old Rock House
8:30 p.m. | $10
By Roy Kasten
In the pantheon of New Orleans musical giants, Allen Toussaint is second only to Louis Armstrong. A chart-topping songwriter, visionary producer, consummate sideman and prolific recording artist, Toussaint helped birth New Orleans R&B, which is another way of saying he helped sire rock & roll. His legacy is not lost on a younger generation, whether in the hometown he never forsook or in St. Louis, whose music scene owes him mightily. "Yes We Can: A Tribute to Allen Toussaint" takes its name from one of Toussaint's most socially conscious tunes and features some of this city's heaviest rhythm & groove hitters: Funky Butt Brass Band, Al Holliday, Messy Jiverson and even Dr. Zhivegas, who is currently celebrating twenty years of dance-floor demolition. Can they all pull off a full night of Toussaint's music? To paraphrase the maestro, great Gosh-amighty, they can.

Foxing Album Release Show w/ Choir Vandals, Jr. Clooney, So Many Dynamos
The Firebird
8 p.m. | $10-$12
By Daniel Hill
St. Louis' Foxing is officially taking over the world. The Albatross, the group's debut LP, landed with a massive thud in November of 2013 and quickly attracted the attention of New York's Triple Crown Records, perhaps best-known as the label that introduced the world to emo darling Brand New. With Triple Crown's backing, Foxing spent 2014 touring in support of bigger-name acts including Seahaven, the Hotelier, Modern Baseball and even the aforementioned Brand New, winning over legions of fans along the way. This October the group released Dealer, its second LP, to massive and universal critical acclaim. At this point the sky is the limit, and Foxing will soon be one of St. Louis' most well-known modern musical exports. Get on board the hype train now so you can brag to your friends later.

Mark Dew
Hideaway Restaurant & Lounge
8 p.m. | free
To walk into the Hideaway is to enter a place that seems frozen in time, where the dozen or so seats around the piano are packed with your grandparents' friends, decked out in chunky jewelry and tilted fedora hats. Ostensibly, they're here to listen to Mark Dew play — he's here Wednesday, Friday, Saturday and Sunday nights — but you're just as likely to hear one of those old-timers sitting around the piano trill Charlie Rich's "The Most Beautiful Girl." And when Dew finally has his turn at the mic, he'll say something humble, like, "I apologize; it should have been in the key of F." No matter. Dew is the conductor of this time-traveling train, and everyone's on board. Dew, who is blind, has been the piano man here for nearly a quarter-century and jokes that the best part about working here is, well, getting paid. He marvels at the younger set trickling in and its knowledge of the Cash and Sinatra songbooks: "The more the crowd gets into it, the more I play," Dew says. And that's enough to keep him around. "I'm not quite ready to be out to pasture," he says. "Yet."