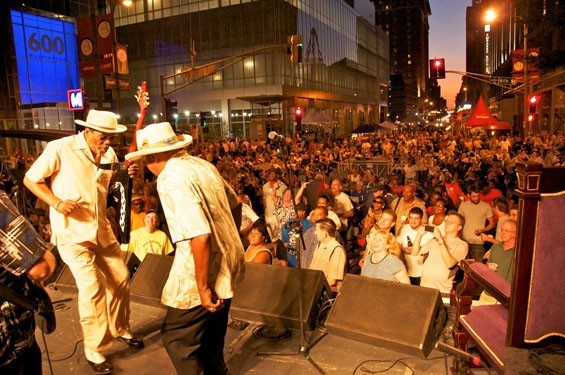 After a year without major summer festivals in downtown St. Louis, the city may have finally had enough. On Black Friday the mayor's office announced that it had ended its agreement with Los Angeles-based International Creative Management (ICM) to produce a promised but never held "Summer Rocks" series on the Gateway Mall.

That controversial deal, spearheaded in part by developer Steve Stogel (president of Clayton-based DFC Group) and approved by the city via Festival Reservation Bill 328, blocked out a downtown area from Union Station to City Hall from May to September 2015, and would have continued to do so for another nine years (and possibly more). The non-compete clause had already forced out local festivals like Taste of St. Louis, Ribfest and Bluesweek.

Because of ICM's failure to produce two events this year, the city received $50,000 in fees, a modest sum compared to potential revenue from the displaced festivals.

ICM once painted an idyllic portrait of its planned country and rock mega-concerts. "With the backdrop of the historic Gateway Arch and the shores of the Mississippi River," it said in an April 2014 statement, "the festivals will bring together top-tier music acts from a variety of genres with local musicians, who are an integral part of the cultural fabric of the city. St. Louis is steeped in rich culture and history, and we are excited to partner with the city to further grow its reputation as an iconic music destination."

That partnership, according to Mary Ellen Ponder, chief of staff to Mayor Francis Slay, is now over. According to a statement by Ponder as quoted by Nicholas Pistor of the Post-Dispatch, "This ambitious endeavor did not come to fruition despite our best efforts, but the city took in fees that far exceeded the time and effort spent pursuing it. We will continue to seek out opportunities that will bring St. Louis the type of world-class music experience that it deserves."

Many local musicians and event organizers were skeptical of the ICM "Summer Rocks" deal from the outset. St. Louis Blues Society president Jeremy Segel-Moss launched an online petition to oppose the deal and gathered over 1000 signatures in a few days.

"This was not a good business decision by the city," says Segel-Moss. "By not having an event like Bluesweek, you're putting hundreds of people out of work. The city wanted to make a business decision, but the city was making a lot of tax dollars out of the events that were already happening. And it was important having festivals that support the culture of the city and our musical heritage."

Reached by the Riverfront Times for comment, Ponder says that even though the partnership was ended prior to the 550 days ICM had to pull off a festival (as stipulated by the contract), the city will not have to pay a penalty. "This was mutually agreed upon between the city and ICM," says Ponder. "It was an agreement to no longer pursue this opportunity."

Six months out from Memorial Day 2016, the city will likely face challenges in bringing an outdoor festival back to downtown for that holiday weekend, if not for the rest of the coming summer. Booking, promotion, sponsorship and logistical work would need to happen immediately.

Are there any major music events in place for the end of May 2016?

"Not yet," says Ponder, "but I look forward to working with some of the local event producers in town to see if we can pull something together. We are a city of thousands of festivals. This will be a great opportunity for some of our locals to put something on. If someone really wants to do an event [over the Memorial Day weekend] six months is doable."

Asked if the city will use the $50,000 in fees from ICM to help seed a new or revived festival, Ponder offers no commitment but sounds open-minded. "I need to review that," she says. "Right now the money will go into general revenue. I need to talk to the budget director, the comptroller and the mayor of course. But we'll definitely take that under consideration. If you hear of any festival producers who are interested — I certainly have some friends who do it — tell them to feel free to give us a call."

The city may be aiming for a "world-class music experience," but such festivals take time, resources and, depending on the vision, a commitment to the world-class music and heritage already present in St. Louis.

"The New Orleans Jazz Fest didn't become Jazz Fest over night," says Segel-Moss. "It started like Bluesweek. To become a Jazz Fest, you have to plant those seeds, and the city needs to water those seeds so that over time it could become a huge economic resource. It continues to be a disappointment that the city from the top down does not see our culture, our food, our music and our history as an economic commodity. It's worth endless amounts of money, jobs and pride. St. Louis has, hands down, one of the most important musical heritages in the world. But we continually decide on corporate money, instant money, from out-of-town people. And that just doesn't work. I'm hoping that, now that this ICM festival is out of the way, the city will find a way to seed new festivals and embrace them for a long time."