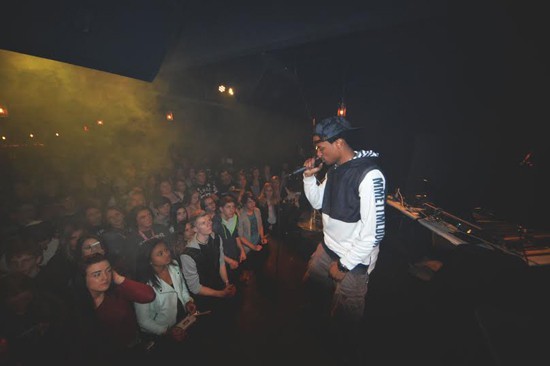 By the end of this weekend, four quality slabs of wax will be released by St. Louis artists. Between So Many Dynamos' Safe With Sound and a split LP by Anodes and Laika,  plus new tunes by the Brainstems and Little Big Bangs, local record collectors should expect to shell out funds now or be stuck raiding the shelves at Vintage Vinyl hoping for leftover stock in the weeks to follow — not that shopping at your local record store is a bad choice. Hip-hop fans can look to the showcase at 2720 hosted by Con or the collaboration between Alarm Will Sound and Damon Davis (of the FarFetched Collective) at the Sheldon on Friday. Oh yes, the Urge is also playing Receiving the Gift of Flavor in its entirety two nights in a row. Almost forgot to mention that.

Alarm Will Sound
The Sheldon
8 p.m. | $20
By Joseph Hess
Some lament the landlocked nature of St. Louis, but others embrace the city for the middleground that it can be. Alarm Will Sound is one such group that counts Missouri as its home base by performing what seems to be a perpetual series of shows at the Sheldon. Alarm Will Sound is also the resident ensemble at the Mizzou International Composers Festival held every year in Columbia, and in keeping with the group's dedication to the Show Me State, it will be perform selections from local musicians such as Damon Davis and Peter Martin among others on this night. Ever wondered what a chamber ensemble of twenty strong sounds like when interpreting a piece inspired by Sun Ra's philosophy and life, written by a local rapper? Us neither, and that's why we love Alarm Will Sound — this group lives to perform pieces that defy even our wildest imagination.

Con & Michael Franco w/ Khori⁴, Jvcks, Repp of We're FamilyAffair, Recluse, The Domino Effect with DJ Nico Marie, Major Music & Noah Morrison, KoVu
2720 Cherokee Performing Arts Center
10 p.m. | $5-$7
By Joseph Hess
Con and Michael Franco are a dynamic duo branching from the MME crew. The pair made a splash with the She EP back in May while Con himself performed at the RFT Music Showcase main stage one month later. As part of this event dubbed "The First 48," the two share the stage with some of the strongest performers in St. Louis hip-hop. For those not in-the-know, this night is an apt introduction to the scene and comes with a low price of admission. Considering the talent on hand, this is a low risk/high reward kind of show.


Dropkick the Robot w/ Adult Fur, DJ Agile One
Off Broadway
9 p.m. | $8
By Christian Schaeffer
If you recognize the name Dan Mehrmann, chances are you know him as a local recording engineer and producer. His Jettison Studios, located on a bucolic patch of land in southern Illinois, has hosted artists including Beth Bombara and the Reverbs, but Mehrmann and partner Kara Baldus make their own brand of synth-heavy, highly danceable pop music as Dropkick the Robot. In the past few months, the pair has released a few fun covers of songs by the Cars and Madonna that nod heavily at their influences, but the just-released “Good Together” stands on its own. With a heavy breakbeat and shimmering keys as backdrop, Baldus deploys a feathery touch on a track that shows both a retro sheen and a fluency with pop-radio dynamics. Pick up a vinyl flexi version of the single at this week’s show for maximum ’80s effect.

Little Big Bangs Record Release w/ The Brainstems (Record Release), Black Panties, Drag
Blank Space
9 p.m. | $5
By Melinda Cooper
From Little Big Bangs Tackle the Personal and Political on Star Power: There's recently been a lot of talk about '90s music. A "revival" of sorts is the general consensus. Maybe there is some truth to that, or maybe it's just a slow emergence of new sounds that have a hint of nostalgia to them. But it could also be the difference in how music is distributed these days. Maybe the '90s marked the end of listeners finding a band, mail-ordering a record and then discovering a bunch more groups through the label that released it. Whatever the truth, whatever the formula or opinion, this nostalgic reboot isn't necessarily a terrible thing — especially when young bands deeply rooted in Sonic Youth or the Breeders influence come along. St. Louis act Little Big Bangs has been developing a sound that echoes — but is certainly not defined by — such '90s forebears. In 2010, multi-instrumentalists Lucy Dougherty, Ryan Macias and Eric Boschen came together from separate projects and created an entirely new monster.


Roger Clyne & the Peacemakers w/ Birdcloud
Blueberry Hill
8 p.m. | $18-$20
By Jeremy Essig
From Roger Clyne’s Biggest Contribution to Pop Culture Is Also His Least-Recognized: When Roger Clyne turned down a graduate scholarship to study psychology at California State University in Long Beach in favor of “having fun” playing music around his hometown of Phoenix, Arizona, he had no idea that more than twenty years later he would become an industry unto himself. But with a record label and a tequila brand — in addition to his band the Peacemakers — the now 40-ish Clyne has done just that.

Anodes/Laika Split Release Show w/ Path of Might
Foam Coffee & Beer
9 p.m. | $5
By Joseph Hess
Laika and Anodes are cut from the same DIY cloth where the ethics behind each song are as vital as any lyric or riff. Both have helped to usher in a number of bands from outside St. Louis, organizing shows at art galleries, coffeehouses, dive bars and south city basements alike. For Laika, the music has morphed from a passionate mold of screamo to an absolutely overbearing force of post-metal. Its descent into darker, heftier sounds has been gradual yet gratifying, owing to the banshee-esque style of singer Mike Brown. Anodes is just as heavy, merging frantically strummed chords with jazzy beats that play with tension like taffy. The whole affair is a post-apocalyptic send up that breaks down only to be built back up again in real-time.


So Many Dynamos Album Release Show w/ 18 and Counting, the Free Years
Off Broadway
9 p.m. | $10
By Ellen Herget
From this 2013 interview with So Many Dynamos singer/keyboardist/guitarist Aaron Stovall: So, what's happened in the last few years? Between lineup changes (Nathan Bernaix of Target Market took Ryan Wasoba's place as guitarist in 2009 — Wasoba is now a frequent RFT Music contributor; Travis Lewis replaced Griffin Kay on guitar and keys in 2011) and the passage of time leaving the members' teenage years a decade behind them, So Many Dynamos has gone through what Stovall feels is a natural progression for all musicians. "I think all people realize...it's just as important to listen to your influences' influences. It's nice to throw all of that together and make something that is you." He cites "when funk turned electro-funk" as one of his current interests.


See also: Here's a Look at So Many Dynamos in the RFT Over the Years


The Stanley Clarke Band
Blanche M Touhill Performing Arts Center
8 p.m. | $25-$59
By Joseph Hess
While he's not the only one to make the bass guitar talk, Stanley Clarke might be the first in modern music to do so on such a grand scale. Most fusion bands of the day have Clarke to thank for cementing the style in the American music canon, whammy pedals be damned. For tech heads (we're talking technique, not technology), Clarke's flurry of fingers is one for the record books. And if anyone tries to argue that, cite his four Grammy awards or any of his platinum records. He comes to St. Louis fresh off the release of his latest record UP, which just received a 2015 NAACP Image Award nomination for Best Jazz Album.


The Urge w/ DJ Stan Da Man
The Pageant
8 p.m. | $25-$35
By Daniel Hill
The Urge's 1995 release Receiving the Gift of Flavor catapulted the St. Louis group to the national stage on the strength of tracks such as “All Washed Up” and “It's Gettin' Hectic,” ultimately culminating in a deal with Epic Records' Immortal imprint, as well as tours with the likes of Korn and Incubus. Twenty years later, the band is celebrating the record's birthday by performing it in its entirety at the Pageant, on a stage recreated to resemble that of Mississippi Nights, erstwhile St. Louis venue and home base for the group during its heyday. But nostalgia isn't all that is on tap. Steve Ewing and Co. also have a new album on the way in December, the band's second offering since reuniting in 2011 after a ten-year break. And speaking of “on tap,” the Urge even has its own line of craft beer now, appropriately named “Gift of Flavor.”


Iris Dement
The Sheldon Concert Hall
7:30 p.m. | $30-$35
By Roy Kasten
At times the voice of Iris Dement seems other-worldly, as hieratic and strange as a cantor from the long-gone past. But the Arkansas native, who now makes her home in Iowa, has always been rooted in our time, our towns, our stories and our struggles, whether spiritual or political. This year she put the rural gospel and country timbre of her keening voice in service to the poetry of Anna Akhmatova, a major figure in modern Russian literature. The results, as heard on the album The Trackless Woods, have a spare and searing immediacy. Dement still sounds like no other singer alive.