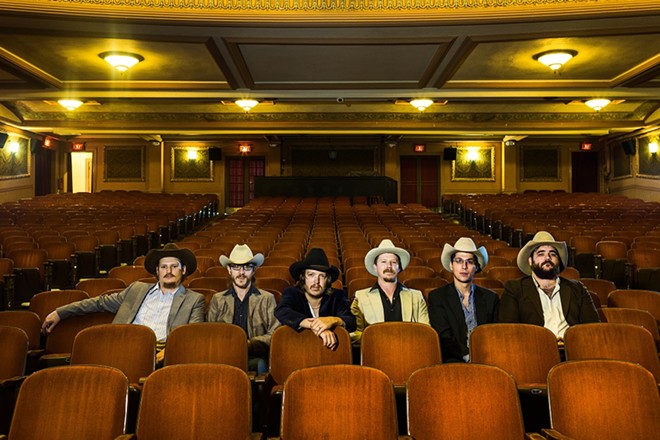 Mike Harmeier doesn’t stop. Except that one time when he got married and those other times when he needed to record an album. Matrimony and records aside, the Austin-based singer-songwriter has been on the road with his band, Mike and the Moonpies, since 2007.

“We’ve been perpetually touring for over five years,” Harmeier says. “We haven’t taken a Thursday through Sunday off in three or four years. Whether we’re working in Texas or Oklahoma, or headed out on longer runs, this is all we do. We just stay on the road. And there’s no end in sight for this tour we’re on now.”

For most people, a never-ending stretch of work is a tall price to pay for a career. For Harmeier, it’s a gift.

“I enjoy every aspect of it,” he says. “I’ve always wanted to be in the music business. There’s nothing about it I don’t like. I enjoy being on the road, I enjoy playing shows, I enjoy the bar scene. I can’t get enough.”

Lucky for Harmeier, 2015 is shaping up to be the biggest year yet for his group, and an abundance of shows hang in the horizon. Part of the reason for the Moonpies’ growing success is their close ties with larger groups such as Jason Boland & the Stragglers — both bands, for example, will perform together in St. Louis at Off Broadway on November 18.

“It’s nice to be able to go on the road with acts that are doing the same kind of thing that we are and already drawing crowds,” Harmeier says. “We’ve been doing the dive-bar thing for years now, so it’s nice to actually feel like we’re accomplishing something new.”

Another recent notch in the Moonpies' collective belt this year was the release of a new album, Mockingbird, in early October. Harmeier speaks with excitement when describing his artistic vision for the new music.

“Every time I make a record, I learn something new," he says. “With this one, I think I figured out how I wanted to push it to the public. Mockingbird is the first time I’ve really had an idea, front to back, and knew exactly how I wanted everything to sound.

“I’m a very nostalgic dude and I grew up a lot with my grandfather,” he continues. “I remember that’s kind of how I got started: hanging out with him at the bars and listening to music. When I was six or seven years old, I would sit at the bar and drink soda while he would talk with his friends. The jukebox in those bars is really what molded my musical tastes. So I wanted to make Mockingbird sound like something that would come out of that jukebox. The album is strongly influenced by what I was listening to at that time: '90s country, Allman Brothers and some Bob Seger kind of stuff too.”

Harmeier describes the group of people who created Mockingbird as a tight collective of close friends. His co-producer was the best man at his wedding. His drummer has been a friend since high school.

“I’m from the Tomball North Houston area,” he says. “The drummer’s been in every band that I’ve ever played in. He’s the oldest friend I have in the band. The bass player, Preston, was the next addition after him. The steel player and the guitar player came as a package deal. They were in another band in 2008, and we were playing a lot of shows together. The steel player wasn’t even playing steel at the time but he really wanted to be in the band so he picked up steel just to be in the Moonpies. It’s pretty impressive. I couldn’t believe he actually accomplished it. And now he’s actually a pretty good steel player.”

With no end in sight for the tour, Harmeier buckles up for an exciting new year on the road. During his exceedingly rare moments of rest, though, he’ll be with his family and some good Southern cooking.

“I have to hang out with the wife,” he says. “I have to eat some chicken-fried steak.”