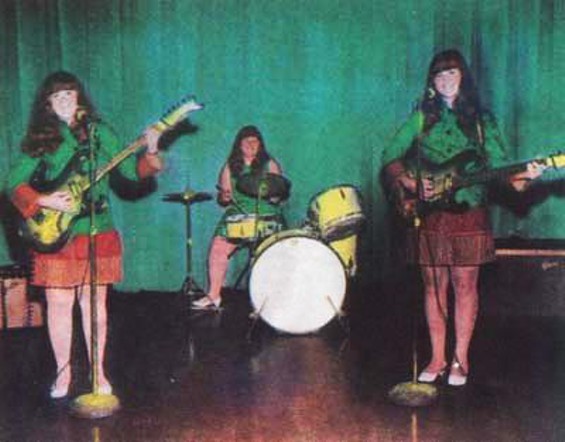 The legend of The Shaggs  — sisters Dot, Helen and Betty Wiggin, who formed a band on their father's insistence — has lingered around pop culture's fringes for decades. In 1969, the trio recorded Philosophy of The World, an album that, for all its chaos, is disarmingly sweet and guileless at its core. Tom Cruise optioned their life story rights. There is a theatrical production about them. The Wiggins themselves have emerged sporadically to perform. Dot Wiggin, the nominal leader, actually released a solo album on Alternative Tentacles Records in 2013.

Famously, the Shaggs rarely left their hometown of Fremont, New Hampshire. Stories abound of the band playing Saturday nights at the local grange hall. Until now, we've had to imagine what that must have been like. Now we have a glimpse.

Over the weekend, New Jersey cassette-culture vet R. Stevie Moore — allegedly one of the first Shaggs fans — posted a fifteen-minute clip of the Wiggin sisters playing the Fremont Town Hall in 1972. The clip is described as a "silent home movie with audio added." The clip was removed from Moore's YouTube account within 24 hours thanks to copyright issues, but it's since shown up elsewhere on YouTube. In the likely event that gets taken down as well, here is a link to a five-minute video clip minus audio that has apparently been bouncing around YouTube for awhile.

It is even better than we could have imagined. It's spooky and heartwarming at the same time. Recorded in appropriately grainy Super-8, the concert takes place in a brown and yellow grange hall with hardwood floors. The Shaggs perform on a raised stage while a few dozen local kids socialize and half-heartedly dance. It turns out that the Shaggs' stage act was relatively polished by 1972. Helen tears into the drums with a self-assurance that contradicts the sneakers-in-a-dryer tempo of Philosophy of the World. Dot and Betty are all smiles, and they even bust out choreographed dance moves. Given the darker stories around the Shaggs — their father was apparently quite the taskmaster, even pulling them out of school and enrolling them in correspondence courses to do this — it's a revelation to actually see them having fun on stage.

That this story dominated the Internet this week is a testament to the Shaggs' enduring mystery. Better than The Beatles? Probably not. Fascinating all the same? Absolutely.