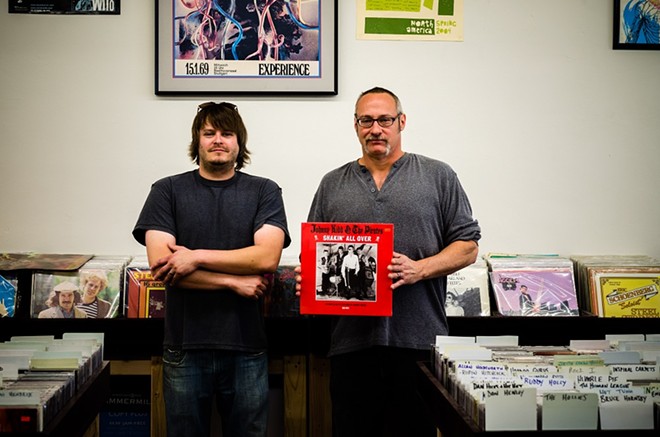 It’s not everyday that a re-upholstery shop is fashioned into a record store. But that’s exactly what’s happening in Maplewood. The owners are calling it Planet Score, and Friday, October 30 will be the first day it is open to the public.

Joe Stulce and Tim Lohmann met in the early 2000s when they played music together in a St. Louis rock group, the Helium Tapes. The band broke up in ’09 but Lohmann and Stulce have remained close friends. Now, they’re opening up Planet Score.

“The history of the company can almost be summed up by this sign,” Lohmann says, pointing to a faded board with red letters that reads "Record Reunion." Stulce laughs and launches into the full story:

“I started working at Record Reunion probably fifteen or sixteen years ago, in the late '90s," he says. "It was a small business in Hazelwood, basically just the owner and myself. When I knew he was going to be retiring — he never really said it but I could tell it was happening — I thought to myself, 'Man, I’m going to have to get a real job.' I realized we could just buy the store instead, and so we did.”

“Right away, we knew we were going to move it somewhere new," he continues. "CD reunion [the ‘90s rebrand of Record Reunion] was in this dead strip mall in North County. We had our regulars from 30 years of business but never anyone new. There was an H+R Block that was only open during tax season, a hearing aid store and us. So like I said, we had to get out of there. We found this spot in Maplewood. It was perfect. And we figured the neighborhood could use a record store.”

Despite the new location and moniker, Lohmann and Stulce are grateful for the company’s origins.

“We’re still paying homage to Record Reunion and CD Reunion,” Lohmann says. “We’re going to hang the old sign in the back of the store. Record Reunion survived all the transitions in the music industry over the past thirty years. It’s pretty incredible, especially when a lot of other independent record stores were going under.”

“The old owner, Dan Kiser, is definitely my mentor,” Stulce adds. “He taught me the ins and outs of the business. But we want to do our own thing. That’s why we changed the name and we’re focusing more on vinyl and stuff that we really like. Tim and I are both really into garage rock, punk, psychedelic rock and prog, so we’ll probably have a lot more of that. But we love it all: soul, jazz, everything. We try to have something for everyone.”

Cassette tapes are stacked in the front corner. CDs sit in the middle of the store and LPs line the right wall. Stulce and Lohmann have been working ten- and twelve-hour days over the past few months to get everything ready. Lohmann finds a picture of the store when they first moved in. In it, boxes are scattered everywhere and the homemade shelves are nowhere to be seen. Needless to say, they’ve come a long way.

“When we first walked in, it didn’t look anything like this,” Stulce says. “There was a wall cutting the room in half. There were holes everywhere, it was falling apart, and there was water damage from a heater that blew up next door. But we could kind of already envision it; the space was already there.”

Now, the store is clean, the wood smells new and the records are neat and well lit. The re-upholstery store of old is nowhere to be seen.

“We had some friends help out with construction, but for the most part it was the two of us,” Lohmann says.

Lohmann lives in Shrewsbury and Stulce in South City. Maplewood was their first choice for a new location.

“The new neighborhood is amazing,” Stulce says. “We get people coming up to us everyday and asking when we’re going to open. We were invited to a block party when we first moved in. The people here are really friendly.”

“The conversations are just endless,” Stulce says. “There’s so much music out there and so much to explore. There are a still a lot of people who want to have the real thing: going to a record store, not having anything specific in mind and digging around. Yeah, you can go online and: bam, you have it immediately. But to me, there’s not much fun in that.”

“It’s about sharing,” Lohmann adds. “To me, that’s the most important thing.”

“We’re just super excited,” Stulce says. “We’re big fans of all the other record stores in town, too. I think there’s a place for all of us, really. We all have slightly different things to do. I don’t know exactly what ours is going to be yet, but we’ll find out soon enough.”