J.D. McPherson Builds a Blues Revival at Off Broadway: Review 10/27/15 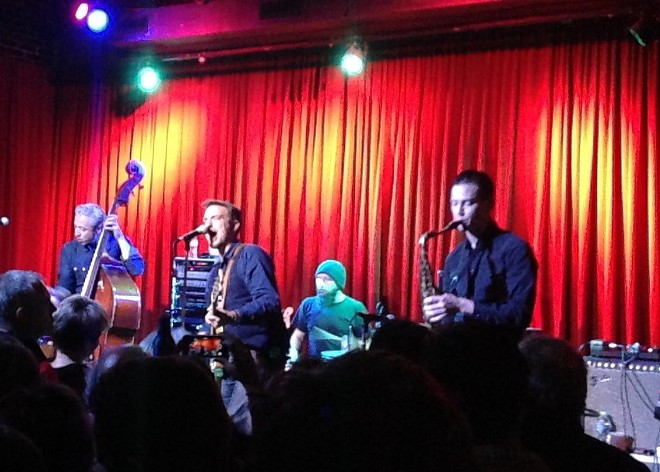 It was just another Tuesday in St. Louis. That is, until J.D. McPherson and his bandmates brought their brand of blues to Off Broadway for an evening that mixed an old-time swing dance party with a head-bobbing rock show. There wasn’t a soul in the venue who wasn’t clapping hands and tapping feet along. These rhythms are already ingrained in our collective DNA, but McPherson puts a personal touch on the sound with relatable, catchy lyrics and jazzy vocals.

He seemed an unlikely candidate to reach rock star status several years ago, when he was working as an art teacher and pursuing a passion for music on the side. It’s hard to believe a talent like his could ever go unnoticed, but his music is certainly gaining recognition now. McPherson is mostly soft-spoken and a self-professed “shy boy,” but he knows how to keep the crowd involved – he reminds his audience that all he wants is for us to have a really, really good time, and he certainly delivers.

Bass player Jimmy Sutton and drummer Jason Smay bring a lot to the table themselves,laying a solid foundation for McPherson's crisp guitar riffs throughout the performance. Throw in a groovy saxophone and you have “North Side Gal,” a bonafide hit that had the crowd singing along from the start.

The revival of blues in modern rock is certainly picking up steam, and McPherson is playing a steady role in the movement. The guitar solos might not shred quite like Gary Clark, Jr.’s, but the rhythms and lyrics at play in his music work together to speak to us on a deep level through their warmth and simplicity.

St. Louisians are familiar with another artist channeling the oldies with a modern touch – local singer-songwriter Pokey LaFarge is definitely right alongside McPherson in spearheading this revival. If you’re a fan of either of these talents, you’ll be happy to know the two collaborated on a single called “Good Old Oklahoma” (McPherson hails from Broken Arrow). Unfortunately it wasn’t showcased at this show, but here’s to hoping the two can share the stage sometime soon.

It’s not long before you find yourself humming and dancing along to these jams, some guided by straightforward lyrics based around age-old wisdom (“Rome Wasn’t Built In A Day”), but each song is delivered in a way that brings the crowd up to the same level of feeling that the performers share. And that is a wonderful place to be – you can feel their passion for the music.

McPherson mentioned at one point that the concert is his first in St. Louis in several years – it’s a shame he and his band don’t get to stop through more often, because this is a city that’s deeply receptive. He’s channeling a sound that’s a huge part of the city’s history, a type of music we can all feel on a deeper level. His music makes us forget our worries (even if it’s just for a couple hours) so we can let our hips shake and truly feel the rhythms.

The impassioned performance reminds us why we love the blues: Singing our sorrows away is often the best medicine. And grooving with these melodies can be so intoxicating that they’re hard to let go — even after a three-song encore, plenty of the crowd was begging for more.

I would be remiss if I didn’t mention the opening act, singer-songwriter John Moreland, whose booming voice and deeply personal lyrics got the crowd on his side from the get-go. He’s another Oklahoma native, and it’s clear that he and McPherson share a special bond through their roots and music, as the latter encouraged several rounds of applause for his opening act throughout the show.

J.D., if you’re reading this: Keep sharing this music with the world, but we’re gonna need another fix soon! I’m anxious to see what this group has in store in the near future, and I’m hoping they can make another pit stop in our city before too long.