13 More of the Creepiest Pieces of Music Ever Recorded, Ever 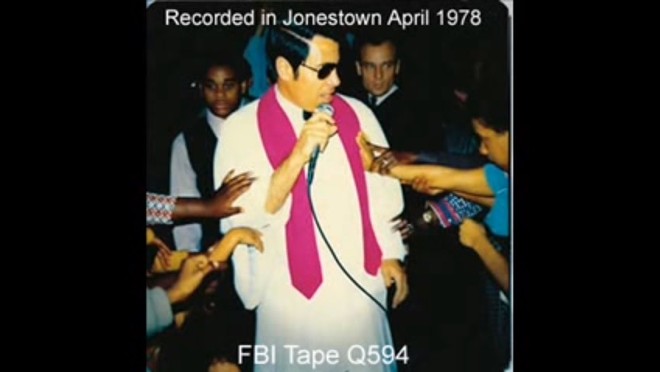 Last week, our newish colleagues at Detroit Metro Times posted a blog entry entitled “13 of The Creepiest Pieces of Music Ever Recorded, Ever.” Author Mike McGonigal listed some worthy contenders among his list, including Cromagnon's Caledonia, the Halloween film soundtrack, and He's Able, the one and only studio album by the Peoples Temple Choir (of Jim Jones/Jonestown infamy).

What struck me, though, was the tone of McGonigal's introduction. He cavalierly disqualified some of the creepiest recordings in history for admittedly subjective reasons. No “Frankie Teardrop?” No Throbbing Gristle? Really? I did agree with his assessment of the Misfits: Those may be great punk songs, but only slightly scarier than Casper the Friendly Ghost.

Now, I've known McGonigal since the Reagan era. I have nothing but respect for his musical knowledge and writing abilities. But as long as he's admitting that his list is “subjective,” I could not resist the opportunity to provide my own list of creepy recordings. Some of them are fairly well-known; others aren't so much “music” as “horrifying field recordings.” Only one of our choices overlaps. Nonetheless, all of them are unsettling, creepy, or flat-out scary to one degree or another.

Keep in mind that you can't unhear any of these recordings. Therefore, I've developed an on-the-fly Fright Factor rating system to help you make informed decisions:

1-3: Mildly unsettling.
4-6: Moderately creepy.
7-8: Avoid listening in dark, remote areas.
9:  Creepy enough that I lived in fear for years that I'd hear it on the radio.
10:  A living nightmare. An audio document of Hell.  You're better off not listening.

Finally, the "subjective" disclaimer applies as much here as in the original piece.  Different people scare in different ways, after all.  Feel free to add some of your choices in the comments section.

This isn't so much “scary” as it is “bizarre and unexpected.” But it unsettled me the first time I heard it, if only for the surprise factor.

Plastic Surgery Disasters was the DKs' weirdest and most psychologically damaged album. It begins and ends with freeform noise jams, while a female voice recites "soothing" passages that quickly turn mocking and sarcastic. This freaked me out so much as a kid that I actually returned Plastic Surgery Disasters to the store, exchanging it for the Human League's Dare. Or something equally non-threatening.

There are all kinds of experiments hidden deep within The Clash's Sandinista! triple album. These include “Lose This Skin,” a surreally sprightly jig, “Career Opportunities” and “The Guns of Brixton” as sung by children in a proto-Kidz Bop style, and a whole lot of ganja-fueled dub. “Mensforth Hill” is the track that used to creep me out the most. It's basically the song “Something About England” played backwards, overlaid with sound effects. Nowadays it doesn't shock me like it used to, but it's still disturbing compared to their better-known hits.

Pomerance was a member of the ESP-Disk label, also home to such rulebreakers as the Fugs, Patty Waters and Albert Aylar. In 1968, she recorded her only album, You Used To Think, supposedly under the influence of LSD and a bad flu. It's hard to think of a more effective combination to evoke a hazy, disassociated state. Not surprisingly, much of the album sounds unhinged. On the title track, an acoustic guitar lays down a basic rhythm while Pomerance freaks out vocally. Her vocals are double-tracked, with the left side carrying the main melody and the right side randomly dropping in loose harmonies and abrupt phrasing. The effect is startling at times.

Bandleader Jad Fair once broke down his oeuvre into two categories: love songs and monster songs. This is one of the monster songs. It includes some of the most piercing screams ever recorded.

John and Yoko released a series of incredibly bizarre albums as the Beatles wound down. But while Two Virgins and Wedding Album at least had some slight levity at times, this one is much grimmer. Side one's “Cambridge 1969” is a live recording: Lennon plays lacerating rhythm guitar, Ono does what Ono does, and eventually a saxophonist joins in.  At times, Ono's vocals intertwine with the sax playing. But it's side two that's really gnawing, a series of pieces recorded while Ono was in hospital during a miscarriage. First Ono and Lennon chant exerpts from their own newspaper clippings, then there are five minutes of their unborn child's heartbeat, then two minutes of silence, as if to think about what we just heard, and finally, several minutes of staccato noise bursts while someone – presumably John – mutters on the phone in the background.

McGonigal declined to put Throbbing Gristle on his list, allegedly because that would cheapen their art. However, shock and confrontation were huge parts of TG's early work, and it doesn't trivialize their achievements to acknowledge it. Certainly, “Very Friendly” - an eighteen-minute evocation of one of the 1960s Moors Murders – is not meant as mere poetic commentary. (For that, you'll want the Smiths' “Suffer Little Children”). Over a primitive drum machine and minimal two-note melody, Genesis P-Orridge narrates the story of Ian Brady and Myra Hindley as they drug their mother, pick out their victim, bring him back to the house, execute him in a most gory manner and invite their neighbor to look at the carnage. In the end, the neighbor calls for help, unable to do anything besides stutter helplessly.

Danielle Dax and Karl Blake, the main Lemon Kittens, specialized in a cryptic brand of experimental post-punk. “An Untimely End” closes out their second and last album, 1982's (Those Who Bite The Hand That Feeds Them Sooner Or Later Must Meet )The Big Dentist. (That isn't even their most enigmatic album title – that would be We Buy A Hammer for Daddy.) Over a seasick synth riff, Blake mutters to himself like a sedated, half-conscious dying man struggling to form thoughts. When the track stops cold, It actually sounds and feels like the plug being pulled.

9) Patty Waters: "Black Is The Color of My True Love's Hair”
Fright factor: 7

McGonigal put this on his list, and it deserves recognition here as well. I've always thought of side one of Patty Waters Sings album as a suicide note, and side two – entirely dedicated to this track – as the actual suicide. Patty Waters goes from woozy, to despondent, to furious in an unpredictable and intimidating manner.

It's the Bodysnatchers' Rhoda Dakar backed by several members of the Specials, recounting a night out that turned into a date rape attempt. It becomes more and more harrowing as the track progresses. Ahead of its time then, all too relevant today.

Here's the recording that set me off on this tear in the first place. McGonigal wrote that he'd heard this song live several times and found it to be “beautiful.” Clearly someone's never taken the Frankie Teardrop Challenge, which was a regular feature on The Best Show with Tom Scharpling in its WFMU days. The idea was to pick a spooky area – a dark street or highway at night, abandoned railroad tracks, caves, basically anyplace remote – and try to listen to all ten-plus minutes of “Frankie Teardrop.” Almost no one managed it. Yes, there's a certain horrible, majestic beauty in “Frankie Teardrop." That doesn't stop me from jumping at the scary parts, even though I know when and where where they're coming.

This is the “Stairway to Heaven” or "Freebird" of scary recordings. It is perhaps the best-known example of a 1960s rock band experimenting with sound collage. (The Mothers of Invention, the Red Krayola and the Grateful Dead also used sound collage, but to milder effect.) Buried on side four of 1968's The Beatles (a.k.a. the White Album), "Revolution 9” is eight-plus minutes of jarring sound. We hear car crashes, tortured screams and cut-up, manipulated and reversed tapes pulled from the Abbey Road studio library. Far from a free-form freakout, "Revolution 9" sounds orchestrated and deliberate, ebbing and flowing as necessary. It was the eerily calm voices that threw me into a panic the first time I heard this in junior high school – the “number nine, number nine” narrator for sure, but also the strange recitations that John Lennon and George Harrison muttered under the mix. I used to have nightmares about this track. For added creepiness, consider that the next song on the White Album is “Good Night,” a gentle lullabye that, in this context, sounds like the world ending.

He's Able is creepy enough once you know the back story, but it's hardly the most horrifying recording the Peoples Temple produced. It's well known that Jim Jones recorded most of his sermons and meetings, including the November 1978 mass suicide in Guyana. (We're not including that one. There is a difference between “scary” and “the sound of 900 men, women and children dying of cyanide poisoning in real time.” It's Googlable.) This website contains hundreds of hours of cassette recordings found during Jonestown cleanup operations, encompassing everything from news reports to agricultural planning sessions, to songs and skits, to the very worst of Jones' mind-control and manipulative tactics. In this clip, recorded about seven months before the November 1978 mass suicide, various Peoples Temple members describe, in graphic detail, their violent fantasies about torturing “defectors” and non-Temple relatives. What throws this awful audio-verite over the top is Jones' response: He laughs in a staccato, hyena-like titter. It is one of the most horrifying sounds I have ever heard.