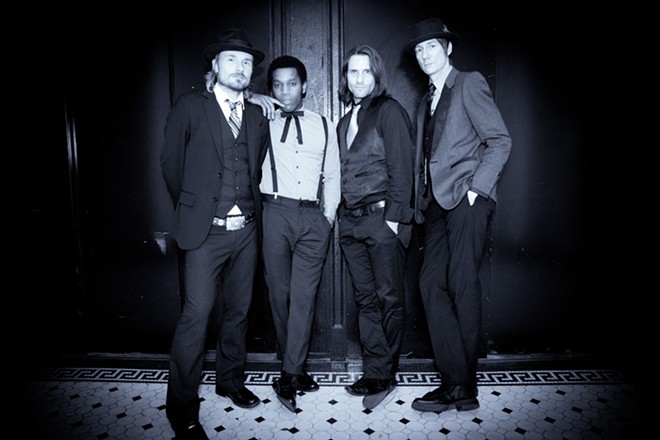 The first thing you should know about Vintage Trouble is that it's a live band, with a very hard extra italics emphasis on the adjective. Lead singer Ty Taylor has been in the spotlight all his life; it's his oxygen, and he seems unfazed by the entertainment machine. He was even a contestant on the reality TV show Rock Star: INXS. But his best performances are more than shows. He's a commanding, strutting but also vulnerable dervish on stage, and his three-piece band plays revivalist soul, blues and rock & roll as if every note was a necessary reminder of how good it feels to be alive. Formed just five years ago in Los Angeles, Vintage Trouble does around 260 dates a year and has opened for everyone from AC/DC to the Who to Paloma Faith and Willie Nelson. So, yeah, the dudes are pretty versatile as well.

This year Vintage Trouble released 1 Hopeful Rd., a sophomore album that not only captures some of what it can do on stage but also points to a deepening confidence with the art of rock and blues songwriting. The band makes its way back to St. Louis for a headlining show at the Ready Room on Wednesday, October 28. After a sound check in Carrboro, North Carolina, Taylor spoke to the RFT about where the band has been and where it yet hopes to go.

Roy Kasten: I’m looking forward to chatting about the new album, but I'd like to circle back to the start for a minute. When did idea of being a musician and performer really take hold for you?

Ty Taylor: I started when I was five years old, singing in St. Paul Baptist Church in Mount Clair, New Jersey. The first thing I sang was "Kumbaya;" my solo was "Can you hear me Lord?" The church started crying. At five years old you don't understand the power of doing something that causes tears that's not for stealing someone's toys. From that time, seeing people cry when I sang, it just caught my soul. I was the crazy kid, the one running around, jumping off buildings, that kind of stuff. I knew how to use my performing abilities to get out of trouble in school. I understood the importance of performance.

Did performing in the church continue through your childhood?

I had already been performing. I did my first commercial on national television when I was fourteen months old, which was a Pampers commercial. My ass was the first thing seen on national television. I did commercials up to the time I went to college and after. I did my first Broadway show when I was eight. As soon as I went to college, I got an acoustic guitar. A friend challenged me to learn to play and I started writing songs. That was a different soul recognition. I knew I wanted to sing music I had written, not just any music. I began thinking about music as a gift, rather than just an attribute. It was powerful to see people connecting to what you were singing that was different from what other people were singing.

Do you ever think how different your life would be if you had won that INXS contest?

I don't really think about what ifs. When I try and think about it, well, the whole idea of that didn't really work out. I think it would have hurt me is the truth. It was exciting, but it was more exciting just to be on national television two nights a week. If I had gotten that gig, I would have been singing Michael Hutchence songs, in Michael Hutchence keys, in front of Michael Hutchence fans. Maybe it would have been exciting to go around the world, but I've gotten to do that anyway. I don't like to lose. I guess I would not have felt like a loser for that month (laughs). I might have gotten some media coverage sooner, but that happened anyway. I'm still friends with everyone from the show, and I get to hang out with them on the road.

Most bands start out naively, even romantically. They don't have a lot of experience in the industry. But you already that experience. How did that shape things? Did it put undue pressure on the band?

I think it took pressure off. Dealing with business decisions, coming to crossroads where most people stress out, I have the experience of not needing to vacillate. I have a lot of experience to help me when others might wonder what to do. I'm not afraid to lose. I like gambling with what I think could lead to a big picture success. I've learned that it's more powerful to take your time and gather fans over a long time because those people will stay with you. I don't want to be here today and gone tomorrow.

Your first album was called Bomb Shelter Sessions. The new album is called 1 Hopeful Rd. Did you ever think, "Maybe we should have found a halfway house along the way?"

(Laughs). Well, we had the Swing House Sessions EP in between. That's kind of like a halfway house!

Did your recording philosophy for this album change?

The first album had no philosophy. We'd only been together three months before we recorded it, and we recorded it in three days. They were demos really that stayed around for years. With 1 Hopeful Rd., we had been on the road for three or four years, and the idea of it feeling a little more spiritual, that's because we've been a band longer. There was more to draw on. It's really about how the road is going to be treacherous; it's going to be winding and bumpy, but if you have hope you can get through it. We're four guys. We're not young guys. We told ourselves that we have no choice but to do this. When other friends maybe stopped and did something else, we've kept making music.

We do record live. We do takes, and we choose the best takes, just the way bands did in the '60s and '70s. For our next record we might have more thought about it being more of a record rather than a live document. Maybe there are some things we haven't thought about yet. Maybe you think more about the record and less about doing something live. You don't get to record everyday. We worked with Don Was. He's one of the smartest producers; he taught us so much. We're four headstrong men, and we pushed back as hard as he pushed us. But even since the record has been pressed, we've learned so much.

The album ends with the song "Soul Serenity," which is probably your most power gospel moment. Tell me about the genesis of that song.

For a year that song was called "Nashville." We came up with it at a sound check. We didn't know what to do with it. It was electric, more hard-hitting. We just couldn't quite get it together. I went to Thailand last year for Christmas, and I was on the beach, talking to my mom or dad, because I talk to them when I'm in church or on the beach, because neither one is here on the walking earth anymore. I connect with them on the beach. I wanted to be serene. I wanted to find peace in Thailand. For some reason the melody kept coming around, and I just started singing the words "serenity" and then "soul serenity." Then I took a canoe ride through the really hard part of Thailand, very third world, where people are throwing bread crumbs in the water and trying to catch fish with their hands. All the words started flooding to me. It was about wanting to understand a serene life. When I want to feel grounded I go to Otis Redding, Carole King, the Staple Singers. When people tell me it's a song they go to, it just blows my mind.