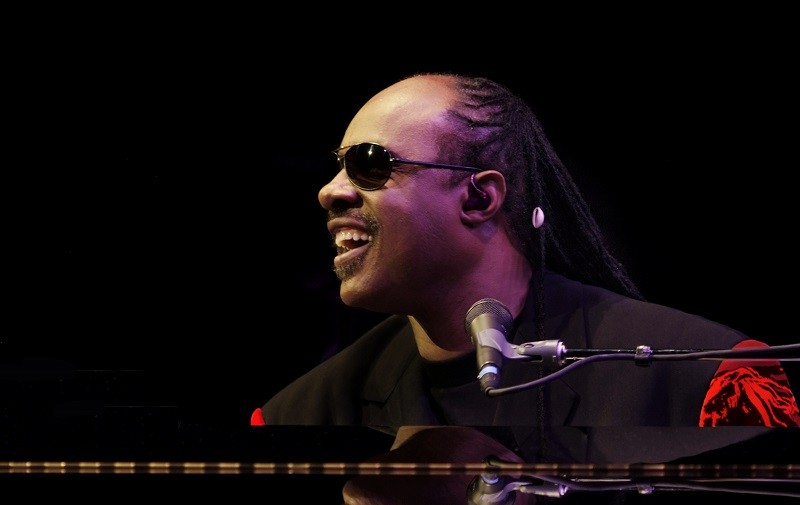 The Scottrade Center was packed with people dressed in their Sunday best on October 25 — red paisley suits, snakeskin shoes and sequins filled the seats of the stadium. The best dressed man there, of course, was the man, Mr. Stevie Wonder, whose glittery blue suit sparkled under the lights of the dome.


Wonder extended what he says will be his last tour playing his Grammy-winning 1976 double album Songs in the Key of Life live, and Saint Louis was one of the lucky towns to play host. Songs in the Key of Life is, according to most critics (including Prince) one of the greatest albums of all time, lending itself to a fairly complex stage show. Instruments included two full drum kits (flanked on each side with extra percussion, including hand-drums) three pianos, six backup singers, two guitars, a bass player, a harmonica player, a full choir and a string section featuring members of the St. Louis Symphony Orchestra.

Despite being an ambitious project set in a stadium, the show was surprisingly intimate. Wonder welcomed the crowd warmly before playing “Love’s in Need of Love Today.” He spoke of how there was a “lot of healing that needs to be done in this part of the country,” and dedicated the show to “those who have lost loved ones in Ferguson” and to two brothers whose mother had died the previous night. He later brought these brothers onstage during his performance of “As,” one of the last and most heartbreaking songs in his set.


Love was the theme for the evening. Wonder spoke of a desire to “spread messages of love and hope,” because “if we learned to love more, we’d have a far better world than we have today.” Wonder gave his band and his backup singers plenty of love, providing room to show off their stuff. He glowed with paternal pride when he challenged his backup singers to a sing-off and lost. “Six to one, not fair,” he joked. Bragging about the incredible talent of his horn section, Wonder said they were the “funkiest in the world... Funky McNasty,” a phrase he had the crowd, deeply embedded in the palm of his hand, repeat.


Wonder has a knack for balancing pain and joy, the silly and the sweet. Before playing “Isn’t She Lovely,” Wonder explained that he wrote the song for his daughter before she was born, saying he just knew she was a girl. His wife argued that it was a boy, and Wonder replied that it wasn’t going to be “a little beanhead boy. If it was a boy, I’d be singing, ‘Isn’t he ugly?’”


Wonder’s banter occasionally veered towards the very serious — he mentioned Ferguson and the Black Lives Matter movement a few times throughout the show. This was no surprise, as many of his songs have a social justice theme. Wonder explained to his audience that “all lives matter, but black lives matter because all civilization started in Africa. You can’t have a tree without roots. We’ve all got a little black in us.”


Show highlights included his performance of “Pastime Paradise” —  the choir brought everyone to their feet as they sang “We Shall Overcome” during the closing bars. The evening’s finest moment came while Wonder was goofing around on a harpejji, a small, square stringed instrument that is played like a piano and sounds like a classical guitar. After starting and stopping a few random tunes, including the “Star Spangled Banner,” he slid into Curtis Mayfield’s “People Get Ready,” backed by the string section and a softly cooing choir. The house lights dimmed and hundreds of cell-phone flashlights lit up the stadium like LED fireflies — the effect was magical.


For his encore, Wonder insisted on being called DJ Click Click Boom by the audience while he played around with some beats. And then he brought Nelly to the stage. They did a mashup of Nelly’s “Hot in Herre” with Wonder’s backup singers cutting up, singing along and dancing. Wonder ended the set with “Superstition,” to the delight of his grateful fans, who erupted with joy and relief at the unmistakable opening chords.


Wonder’s set began at 8 p.m. and ended at midnight on the dot, with only a fifteen-minute break for an intermission. His performance was the best kind of party — one where you lose track of time and leave exhausted and dazzled, glad to be alive.


We’re keeping you informed…
...and it’s what we love to do. From local politics and culture to national news that hits close to home, Riverfront Times has been keeping St. Louis informed for years.