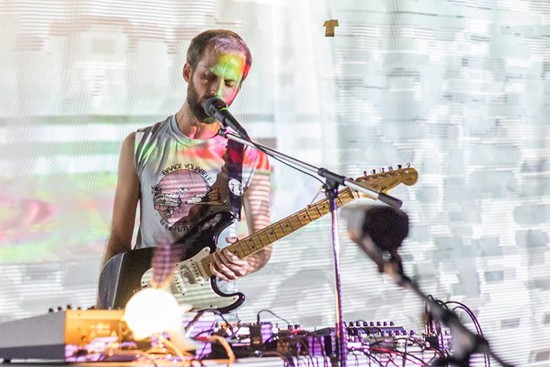 The changing of the leaves signals a time of transition, but for St. Louis, some things will always be the same: Local bands continue to put out stellar records constantly. While Foxing is set to release the follow-up to its critically acclaimed debut The Albatross, acts like Hylidae remain a better kept secret, but not for lack of substance or style. Our guide for the weekend ahead covers underrated bands as well as old favorites —  showing that some things never change.


Fumer w/ Twingiant, Damned Holy Rollers, Van Buren
The Demo
9 p.m. | $8
The crossroad where grunge and stoner metal meet is cracked and covered with sludge. Fumer and Twingiant are two such bands that, for all their solid hooks, revel in feedback and noise. Wearing earplugs is part of the deal here, but that shouldn't detract from the experience, especially when the bass wraps around and tugs on your guts. Bone rattling aside, every band on this bill weighs a ton, especially Van Buren, whose own songs feel as heady as they are heavy.

In the Valley Below w/ The Moth and The Flame
The Firebird
8 p.m. | $12-$14
This tour might mark In the Valley Below's first as a headlining act, but to many, the duo of Angela Gail and Jeffrey Jacob have been the main event for a long time. The pair performed on Conan back in February after hitting countless top ten lists in 2014. That kind of momentum could have easily died out, but the band continues to impress and inspire with its own progressive pop songs.


See also: In the Valley Below: "We Were Really Inspired by Phil Collins"


Leftöver Crack w/ Days N Daze, All Torn Up!, Life on Mars
Fubar
8 p.m. | $12-$15
By Daniel Hill
If third-wave ska songs about killing cops are your thing, you probably already know all about Leftover Crack. The punk-leaning New York act has been at this since 1998, born out of the ashes of Choking Victim and attracting legions of fans with its extremely left-of-center political views. Police brutality has long been the subject of the band's ire — alongside homophobia, the war on drugs, religion and capitalism in general — so it will be interesting to hear what singer Scott Sturgeon has to say in St. Louis in the wake of last year's Ferguson protests. Safe to say it will not be a glowing review of the state of American policing.

Yelawolf w/ Meg Myers, Cavo
The Pageant
8 p.m. | $29.50-$59.50
Some white rappers are happy just to bask in the shadow of Slim Shady, but Yelawolf is one with an actual stamp of approval from Eminem himself. While his flow and fierce delivery are proof enough for some, this young rapper brings a fresh perspective — one with an underlying optimism that is no doubt propped up by success in recent years. No matter, that positive edge has been there since Yelawolf's start, owing to his nomadic nature as a teenager and all the pieces he has picked up along the way.


Dan of Earth w/ The Tory Starbuck Project, Kevin Harris
Schlafly Tap Room
9 p.m. | free
Dan of Earth is a seasoned veteran of Milwaukee's Noisefest, which is — you guessed it — an annual account of experimental artists not only based in Milwaukee, but the midwest and beyond. He has been performing in that oft-misunderstood genre of "noise" for more than two decades, taking on the modular synthesizer as his primary instrument. Now in 2015, Dan himself sells a streamlined version of his own setup encased in a bible, giving young musicians a chance to commit sacrilege while ditching the acoustic guitar for something a little more esoteric. Think of this show as a live demonstration and a chance to see this stalwart of Milwaukee's experimental scene outside his native habitat.


Drive-By Truckers w/ Jonathan Tyler
The Pageant
8 p.m. | $25-$27.50
The Drive-By Truckers are by all means a Southern rock band, but that term might carry a little more weight than founding member Patterson Hood would like. After all, even Lynyrd Skynyrd proudly hung the Confederate flag until going gray on the subject a few years back. As one of America's foremost songwriters, Hood crafts the kind of hooks that reach beyond borders, or the line between north and south, at least. 2014's English Oceans is yet another record from a band that has more than enough to say while still finding fresh ways to say it.

Foxing
Vintage Vinyl
1 p.m. | free
There comes a point when we have to stop referring to a band as "local." Foxing bolted far ahead of the pack at the tail end of 2013 when its inaugural record The Albatross showed up on several year end lists — including one on the U.K. branch of the Huffington Post. The band has been hailed as emo-revivalists, bringing the genre back into a limelight not seen in over a decade, but Foxing's latest record DEALER shows the band eschewing those notions in favor of a new, distinct sound. That's the impression we get from the latest single "Weave," anyway.


Hylidae Album Release Show w/ Rip Rap, Wax Fruit, DJ Willey, DJ Snowden
Foam Coffee & Beer
8 p.m. | $5
Hylidae is a one-man force of unnatural sounds that build into buoyant dance songs. A voice howls from the long corridors of electro bliss, delivering synth and string driven beats bathed in samples. If this seems like a mess, just know that it could very easily misfire, but Hylidae has had plenty of target practice in south city dives and basement shows around St. Louis, cutting his teeth on the ground level before ever stepping up to a stage. Read more on his latest release Intransitive in this review by RFT contributor Christian Schaeffer.


Ratboys w/ American Merlin, Le ponds, Middle Class Fashion
Melt
8 p.m. | $5
"Ratboys" sounds like a pre-Senior year punk band of boys (and hey, girls too) with matching rat-tails. But this Chicago quintet takes a rough and tumble approach to twee pop, bringing equal parts soul and psychedelia. Its latest, AOID, merges melodic ideas with less than reckless abandon, hitting paydirt with helplessly catchy riffs. The whole affair feels so natural and effortless, but anyone who has written a song (or knows a thing or two about doing so) can attest to the mastery at work.


Stevie Wonder
Scottrade Center
8 p.m. | $36.50-$146.50
By Christian Schaeffer
If you’re generally lukewarm about “classic album” concert tours, your fears are not unfounded; while it’s edifying to hear a seminal LP played front to back, the format takes some of the fun out of the normal setlist-guessing. (Plus, wasn’t Bryan Adams’ 30th anniversary tour behind 1985’s Reckless more than a little sad?) Stevie Wonder, though, gets a free pass for his Songs in the Key of Life tour: The double LP remains the clearest document of his astral-soul genius, with singles and deep cuts that cover the breadth of Wonder’s range. He hits on social ills (“Village Ghetto Land”), nostalgia and its dangers (“I Wish” and “Pastime Paradise,” respectively), the reclamation of African-American history (“Black Man”) and more across these seventeen songs. It’s certainly more than enough to fill a concert setlist, and show-goers get the guarantee of hearing Stevie’s most perfect song, the eternal and undeniable “As.” Few albums sound this alive and universal at nearly 40 years old.