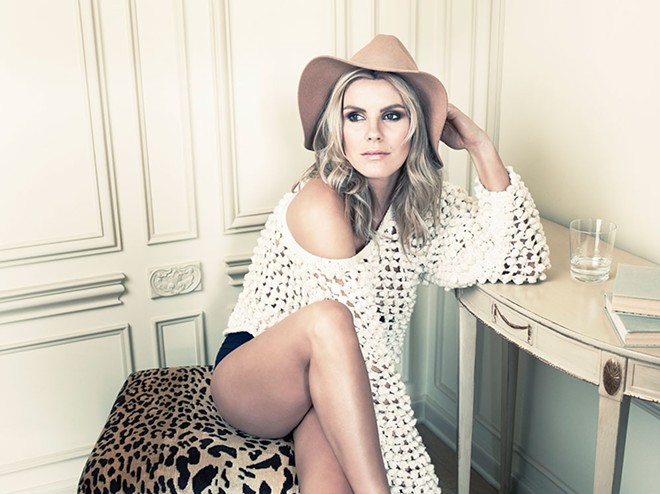 When Grace Potter meets with producers to see if they might want to work with her and her backing band, the Nocturnals, she doesn’t let the prospects listen to her demo tapes. But with producer Eric Valentine (Queens of the Stone Age, Nickel Creek), whom she approached about handling her solo debut, Midnight, she just couldn’t contain her enthusiasm.

“There were many people in the running and a lot of people I was considering, but none of them called out to me quite the way that Eric did,” she says via phone from a San Francisco tour stop. “When I meet with producers, I have a bunch of songs and a sound in mind. I explore their catalog and approach and see if it’s right for the song. I never ever play the song. That’s my secret — I don’t want to give away my poker hand. As soon as I sat down with Eric, I wanted to play him everything. I don’t know why. I think it was a good sign.”

She says she usually finds the studio to be a “daunting thing,” but with Valentine at the helm, she was able to relax and focus on the music.

“It’s the first time I enjoyed being in the studio,” she says. “I really allowed myself to enjoy it. I’m not a patient person. I want things to be done quickly, and I want them to sound great. The reality is that it does take time and a lot of experimentation before you can land on something that’s right on. Eric made that fun instead of making it like pulling teeth.”

Potter leaves her country and roots-rock impulses behind on Midnight as the album commences with the peppy “Hot to the Touch,” and embraces soulful pop (“Alive Tonight”) and futuristic funk (“Your Girl”) in their stead.

“It felt like I was going to be in denial if I made it a Nocturnals record,” she explains. “Everybody has to grow up at some point. I had been relying on the band as my safety blanket. I don’t need to lump everybody into that position.”

For the new record, the core studio band consisted of Potter and Valentine on most of the instruments with Matthew Burr on drums and percussion. Of course, members of the Nocturnals — guitarists Scott Tournet and Benny Yurco, and bassist Michael Libramento — contributed to the sessions. Singer-songwriters Rayland Baxter and Audra Mae, Noelle Skaggs of Fitz & the Tantrums, Wayne Coyne of the Flaming Lips and Nick Oliveri of Queens of the Stone Age all have cameos as well. Potter describes the finished product as though it was all a happy accident.

“It took a long time to acclimate to the reality of it,” she says. “While I was writing the songs I intended them to be for a band record. We spent time exploring different options and ways the record could go when we were in pre-production. It was this thing, but it kept coming back to center. It was a different sound and collection of influences I wasn’t used to playing.

“At the same time, it was satisfying,” she continues. “It was charging me up. It’s a meditation on what fun is and what fun can and should be. It took a while to recognize that. Just because you’ve been something, doesn’t mean you have to keep being that.”

“Alive Tonight,” a great party anthem that could pass as an Annie Lennox/Eurythmics tune, puts Potter's terrific voice on full display. A rainy day in Vermont inspired the track.

“I wasn’t feeling very alive at all [the day I wrote it],” she says. “I needed to wake myself up. Sometimes, a song can be a meditation on your life or a slap in the face. That song feels like a slap in your face. It was received by fans with shock and awe and horror. That’s what I wanted.”

“It’s one of my favorite songs on the record,” she says of the tune. “It’s one of the greatest sonic successes that Eric and I had in the studio. That was one that took a long time and a lot of head-scratching to get it to sound the way it should sound.”
“Empty Heart” was supposed to feature a professional choir singing backing vocals. At the last minute, Potter ditched that idea and put together her own rag-tag bunch.

“A lot of those voices are just me and Eric,” she explains. “I thought there’s something better about shaping it and exploring some sounds that aren’t one specific gospel sound. I wanted it to be more universal. I brought in a lot of the other vocalists — Max, my drummer, and Eric and I. People who aren’t even singers. They were like, ‘Fuck it. I’ll come in and shout and sing.’ It was a fun experiment. I enjoyed being able to direct it, and I gave people notes that were wrong. I went very Brian Wilson on that one.”

Potter says she hasn’t started thinking about the next album yet, but she imagines it could represent another shift in sound.

“I’m always writing songs, but not with the intention of making a record,” she says. “It’s been a huge year of massive change, shifting and uprooting everything I thought I knew. I have a lot to write about. I’m not done with the conversation.

“I don’t know what’s next,” she adds. “For the first time in my life, I have no idea. And I’m totally okay with that.”