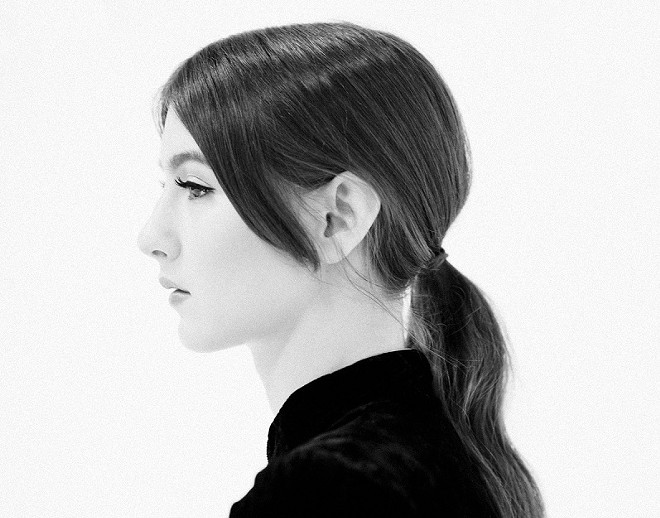 Rockaway Beach is a New York City neighborhood of unusual extremes. Situated on a peninsula, and separated from the rest of Queens by Jamaica Bay, it's home to quaint bungalows, but also abuts some of the city's roughest housing projects. You can take a subway there, but it's much further and harder to reach than the Ramones would have you believe. In the winter, Rockaway Beach takes on an eerie, melancholy quality.

It's in this environment that Natalie Mering, who records and performs as Weyes Blood, wrote the newly released (October 9) Cardamom Times. Recorded at home on an analog four-track, each of these four songs has a lonely, solitary feel, with lyrics evoking reflective moods, half-remembered dreams and promises of love and faith. There's a hint of '60s psychedelic folk in Mering's rich and proper vocals; it's easy to imagine her sharing a bill with Bridget St. John or Vashti Bunyan.  At times slow and surreal, at others upbeat, Cardamom Times is true to its origin, a strange and powerful mix of urban and natural influences.

Rockaway Beach is the latest port in which Mering finds herself. Born in Southern California, Mering grew up in Doylestown, Pennsylvania, not far from the hippie haven of New Hope. In Doylestown she discovered college radio (her favorite: Princeton University's great WPRB), worked in a record store, tried and failed to get a band together, and ultimately started releasing her own music at age fifteen. Since then, she's lived in various places: a tent in New Mexico, a small Kentucky hamlet where she studied herbalism, a converted artists' warehouse in Baltimore, and finally New York. We started by discussing the ways location informed her latest music.

Natalie Mering: There's a soaked-in quality of Rockaway in the songwriting. I lived about a block away from the beach, but I went to the beach every single day. It was really wonderful. It's on Jamaica Bay, which is a beautiful natural phenomenon, but totally polluted. That's where we shot the EP's cover. I was inspired by the subway going over the body of water, but with all this trash.

RFT MUSIC: That area is a little removed from the rest of the city.

I lived there through the winter, so it was very isolated. There's nobody coming out there then. There would be a snowstorm, and I'd walk out onto the beach. There weren't even really restaurants. You can only really get Chinese food out there. It's disconnected from everything Brooklyn. Which I really loved. I'm not inspired by Brooklyn. I still love the Lower East Side and Manhattan, but I lived in Brooklyn for a few years and never could get down there.

Do you get inspired by traveling?

I really like changing things up and experiencing other cultures. Just to note the similarities and as an observer, to see that these things are all in relationship with very complex architecture. Going to more places, you gather more research and understanding. I love meeting people who have never been anywhere else, because I get to see their fabricated perspective of the rest of the world. Everybody is in the dark, and that's fun to realize. Like: “People don't travel that much! It's not a requirement! They can just stay in the same town!” They have an idea of what a place is like from the news, and I get to do field research and live there.

How do you record?

Mostly by myself. I'll go to studios to do overdubs, or someone will help me mix. Most of it I try to do myself. For my last record (The Innocents) I worked with engineers, and that was exciting. But now I do home studio. I find it's a little more my style.

Was there music in your house growing up?

Yeah. By that time my parents had become born-again Christian, so they would play at our church's worship services.

Did they keep their secular records?

My mom did, but not my dad. My mom loved Joni Mitchell, Linda Ronstadt. My dad loved Stevie Wonder, Weather Report and more interesting '70s stuff. XTC was his favorite band. The first record I got was a cassingle, Duran Duran's “Ordinary World.” I had the Nirvana Unplugged tape. I loved “The Man Who Sold The World” so much, and when I found out it was David Bowie I looked into him. We were all into Ween, me and my brothers. They were really into hip-hop: Dr. Dre, Snoop Dogg, West Coast stuff. So I was influenced by that a little bit, but Ween was the thing that really resonated with me. And Stevie Wonder – I think at the first talent show I was in, I sang one of his songs. I was into Joni Mitchell, but there was this weird vibe in my family that we would gang up on my mom, which is kind of mean, and make fun of her music. It actually took me a really long time before I realized (Joni) was a total genius.

I started listening to classic rock radio. And it was slowly through the classic rock radio that I discovered the college radio stations that played all kinds of crazy music. I had a notebook, and I'd write down everything the college station played. You know, they'd play ten songs and then be like [imitates soporific college radio voice], “OK...you...just...heard...” and name 20 artists. So I would have to write it down and star the songs I liked.

Did you get into any of the '60s folk stuff at the time? I hear a lot of Tim Buckley.

I love Tim Buckley. Actually, I love Jeff Buckley, too; I heard about Jeff Buckley first. I loved Syd Barrett. I still remember the first time I heard “Terrapin.” I just had no idea music like that existed. It was so much what I wished I could sound like. So I was really into Syd Barrett, Pink Floyd, Skip Spence. It was later that I got more into the folk.

I started playing shows when I was fifteen or sixteen. There were bands I wanted to be in, but they wouldn't have me. There was a lot of hardcore/screamo stuff going on. I'd come over with my guitar and delay pedal, and they were like, “No, we want you to play bass.” [I'd reply] “OK, I'm outta here.” The one time I formed a band, I finally got my friends to play with me. But they were really embarrassed, and the day of our show, I was like, “OK, guys. I guess it's just me.” I ditched the idea of being in a band and started recording with my four-track. It's funny that Kim Gordon called her book Girl in A Band, because that was what I thought I would be. I thought I'd be a side note, a really cool supportive chick in this great band. Those were the kind of women I looked up to. I wasn't planning on being a solo musician, but I just couldn't meet anybody as obsessed with music as I was.

I did have a musical soulmate in my early twenties who used to play in Weyes Blood. I really wanted him to be a full-time bandmate. I was ready to dissolve my solo project just to be in a band with him, but he was a shut-in kind of dude and did not want to deal with people, go out or play shows.

Does having an audience change the way you write or record?

Actually, when I was less experienced putting music out, I was more self-conscious and more aware of what others would think. Then, when I realized that that negatively affects your artistic vision, I became less interested. So now I'm interested in a sense that I want it to be something that improves somebody's day, but to stay true predominantly to myself. That seems to be what works best. I've seen it with a lot of my other friends who are musicians. When you compromise, you do everybody a disservice.