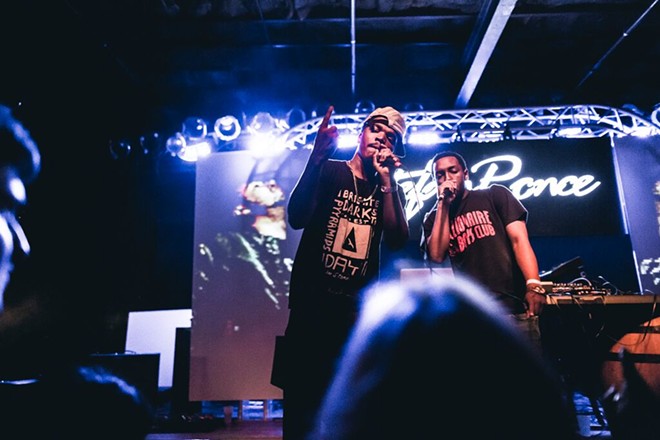 Tucked away on Chicago Avenue in the city's Humboldt Park neighborhood is Classick Studios, run by Chicago native and audio engineer Christopher Inumerable. Inside the space’s smallest room sit rappers Chris Smith Jr. and Jeff Smith (no relation), and producer Monte Booker — all three members of the creative collective Zero Fatigue. Jeff raps under the name Jay2AintShit; he and Booker are both also from Chicago. Chris — also known as Smino — was born and raised in St. Louis.

Following high school, Smino moved to attend Chicago’s Columbia College, during which time he met and befriended Inumberable, who soon became his manager. Smino dropped out after a year and moved back to St. Louis to make music with rapper Bari Allen, and from 2011 to 2014 he bounced around between St. Louis, Milwaukee and Chicago, making beats for others when all he wanted to do was rap for himself. Now he stays in Chicago, mainly because of Classick Studios.

It takes a moment for the trio to compose themselves, since their natural inclination is to goof off when they’re in the same room. (At three different times during our interview, each one puts on sunglasses while the other two try to remain serious, but burst out laughing instead.) Though they like to joke around, they take their group seriously. Zero Fatigue was birthed in this same studio, the byproduct of a song that Booker and Smino were working on together. That day, after Booker finished a beat and left to go to school, Smino hopped into the booth, asking Jay2 if he wanted to get on the track. Smino arbitrarily rapped the phrase “zero fatigue” while laying down his verse.

“We named the song ‘Zero Fatigue’ and that’s what it was — just a song at first,” Smino recalls.

The trio soon took to the phrase, housing their entire musical movement under it. Smino’s next project, slated for a 2016 release, will also carry the moniker. Over time the two words have taken on greater significance and formed into a collective based on a concept of tireless effort.

“Zero Fatigue is a lifestyle; it’s how we all live up here,” Smino says. “It’s never a moment where we feel like we're running out of energy for this — we always got the energy to do this. Always self-motivated, motivated by our friends. Always pushing the envelope. That’s what it is: innovation without enervation.

Besides Smino, Booker and Jay2, there are a host of other artists and creatives — a majority of them Chicagoans — who belong to the Zero Fatigue family. St. Louis visual artist Jarrel Lawrence is included in the mix as well.

Lawrence is the founder of the St. Louis art and music showcase Vibes. As a digital illustrator whose work revolves around movies, TV, cartoons and hip-hop, Lawrence found that the city lacked a platform for him to exhibit his work, so he took it upon himself to fill that artistic void. With a mission to exhibit St. Louis’ talent that might otherwise never get the proper chance to shine, he has created a positive, safe space for the city’s young artists to thrive. It's a cause the other members of Zero Fatigue fully support — Vibes’ fourth installment is set to take place on Saturday, October 10, and the collective will be performing.

“I started Vibes because I know, in my case as a young black artist, it’s hard as hell to showcase work in St. Louis if you don’t have a good-ass connection or a good-ass venue,” Lawrence says. “That’s one of our main problems with Vibes: finding venues. We never had anything bad happen at Vibes, but it’s just off the fact that [the event has] a lot of black people in one spot. I’ve had eight galleries turn us down, just off the strength of me being black and we’re having black people in the spot.”

The first Vibes event was held at Blank Space in 2013, but since its inception, the series has steadily grown. This year's show takes place at the considerably larger 2720 Cherokee Street.

According to Lawrence, the 2015 edition of Vibes is going to be the most diverse yet. In addition to the music — Arshad Goods, Bryant Stewart, TheePharaoh, Brock Seals, Lottie Denise, Father Phigures, 4Deep and Eddie are also performing — the show will present artwork of all mediums by over a dozen artists from inside and outside of St. Louis. There will also be food from J. Samone, Ricos Empanada House and Miss Rita's Kitchen, and clothing showcased by Mars Mansion, Koji and Knight, and Vanguard.

“Vibes is our stage. It’s like the Apollo in St. Louis,” Smino says. “[It’s] just opening up the doors. Nobody looks into the city.”

Smino says he wants to bring some of the momentum of Chicago’s music scene to his hometown. And since they’re Midwesterners themselves, Booker and Jay2 just want to help St. Louis progress.

“We just both giving to each other. It’s the Midwest — we about to take over,” Booker says.
“It’s really cool to see what [Lawrence] is doing with the city, because he’s bringing all these talented creatives from St. Louis that really don’t have no outlet to Vibes, and bringing Chicago to Vibes,” Jay2 says. “That’s bridging the gap to where it’s opportunity. That’s the most important thing about Vibes and about St. Louis — getting their creatives a voice. That’s a big deal for Zero, just bridging that gap to giving [St. Louis] people and culture a say-so.”

At this point, Vibes is on its way to outgrowing its city. Lawrence’s ultimate objective is to take the event onto the road. He’d like his next stop to be Chicago, of course, since connecting the two cities and allowing them to feed off each other has become paramount to the event's success. Smino is fully on board.

“I’m hella proud of [St. Louis] at the moment,” he says. It’s been so much bad energy with all of the fucking cop shit that’s been going on. Anything positive is such a good look. Something that gets on the level of Vibes is like damn near church. We need that. Just to see that black people are doing other things outside of getting killed by the police. It’s just cool to hear some good energy coming out the crib.”