The 10 Best Concerts in St. Louis This Weekend: October 2 to 4 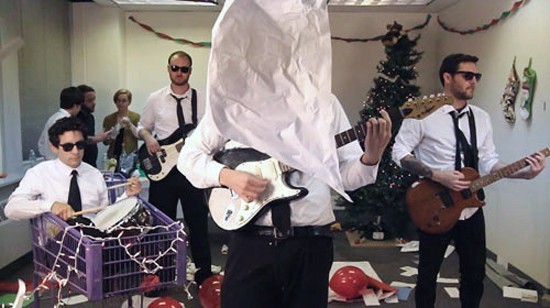 This weekend brings legendary jazz players at an obscure club in University City, a daytime block party at Vintage Vinyl and one of America's rising pop divas at the Scottrade Center. Remember, Grove Fest goes down on Saturday with a stacked after party at the Demo with CaveofswordS and Mariner. Not into local music? Maybe you'll change your tune after seeing some of St. Louis' leading ladies pay tribute to Bob Dylan at Off Broadway. Pick your poison.

Gateway Music Festival w/ Keith Sweat, Bell Biv Devoe, Salt -N-Pepa, 112, Silk, Troop
Chaifetz Arena
8 p.m. | $49-$125
The dream of the '90s prevails for fans of hip-hop and R&B in the river city. Chaifetz has had its fair share of legendary acts in the past year (K-Ci and Jojo, anyone?), but this lineup brings a big range, from Salt-N-Pepa's upbeat dance jams to Keith Sweat's masterful swingbeat. The rest of the lineup reads like a who's who of the era, so old and new fans alike can get a good feel of the scene from two decades ago just by hitting up this single show.

Hikikomori Release Show w/ Lush, Ani Kramer, Time Against Light, I Could Sleep in the Clouds, The Vanilla Beans, Golden Curls, Burlesque by Blyre Cpanx
Foam Coffee and Beer
8 p.m. | free
Hikikomori is the latest comic collaboration between Unheard and How's Tricks Creative, two zine producers who have joined up to bring this special release. The show's lineup features I Could Sleep in the Clouds, who recently edged out hometown heroes Foxing in our poll for "Best Emo Band" in our music awards this past summer. The Vanilla Beans bring their twee pop in rare acoustic form while Golden Curls performs a DJ set to round out a full night of free music. While the ticket price is nil, bring a few extra bucks for the book, yeah?


Joywave w/ Grace Mitchell, Kopps
The Firebird
8 p.m. | $12-$15
Joywave is the latest cog in the indie pop hype machine. But that's not to say their hooks hit any less hard when stacked against their more formidable peers. Thoughtful wordplay and nice, crunchy bass helps to elevate the band's songs beyond alt-rock radio fodder. But don't be surprised to hear Joywave on heavy rotation at say, every college station across the country. Opener Grace Mitchell signed her first major record deal at the tender age of sixteen — what have you been doing with your life?


New Music Circle Presents: Evan Parker and Peter Evans
Joe's Cafe
8 p.m. | $10-$20
Hit up jazz blogs across the Google spectrum and you'll find one common element in every article: Writer loves to spout off a long list of collaborators. That game of insider baseball between hardcore fans only works in cases like Evan Parker, whose own history features the likes of Anthony Braxton and Milford Graves. As a fierce saxophonist, Parker fires off startling runs and absolutely wicked tones with a controlled decay. His partner on this night, Peter Evans, is an active trumpet player in the New York scene, working with no-wave and math rock contemporaries including Zach Hill (of Hella) and Weasel Walter (of the Flying Luttenbachers, Cellular Chaos). Since Friday night is stacked with stellar shows all over town, consider the free workshop at Foam the next morning at 11 a.m., wherein both performers will field a Q & A session and collaborate with a few of St. Louis' finest free-jazz jammers.


Popular Mechanics Album Release Show w/ Tok, Brother Lee and the Leather Jackals
Schlafly Tap Room
9 p.m. | free
By and large, Popular Mechanics is a no-frills rock band that relies on simple, catchy songs with a heavy pop infusion. Songs link together with with tight and catchy singalongs, but the band can surprise at times with an injection of post-punk. The whole affair is a primer on classy songwriting with an extra chapter on the heady indie rock of the '90s, referencing Jimmy Eat World, At The Drive-In and Pavement, to name a few. The band releases its new record at a free show, leaving concertgoers with enough extra bills to actually buy the new album. What a novel idea!


Bobbing for Dogs: A Tribute to Bob Dylan w/ the Fog Lights, Cassie Morgan, Sarah Jane & the Blue Notes, Beth Bombara
Off Broadway
8 p.m. | $15
With Three Merry Widows canceled, Off Broadway stepped up with yet another strong tribute night. This time, the immortal Bob Dylan is paid tribute by some of St. Louis' strongest female leads in the scene. The jazz-infused Blue Notes led by Sarah Jane bring a swing to protest songs while the Fog Lights dress these classics up in new clothes. St. Louis loves its cover bands and tribute nights, but Off Broadway by far sets the best example in the river city.


Brothers Lazaroff Block Party and Album Release w/ The Soul Selector Tom "Papa" Ray, The Bottlesnakes, Bella and Lily, Thelonius Kryptonite
Vintage Vinyl
1 p.m. | free
Brothers Lazaroff is back to transform the scene outside Vintage Vinyl into a raucous backyard party with food, booze and the blues. Best of all, this affair starts at 1 p.m. and runs into the early evening, meaning showgoers can take a break from the jams at any time to hit up the record store proper and stock up. Fair warning: Delmar Boulevard is still a mess, but parking is available, you just have to brave the two tight lines between all the construction. The effort is a fair price, considering that the event itself is free of charge.


Dillinger Four w/ Night Birds, the Brokedowns, the Humanoids
The Firebird
9 p.m. | $15
Dillinger Four has been screaming "fuck the man" for more than twenty years. That kind of passion (or jilted apathy) counts for something, especially to the punk set. The band is practically a household name, but Night Birds, however, isn't. The Jersey surf-rock crew just released its third studio effort, Mutiny at Muscle Beach, which has to be the best title I've heard for an album all year long. Doesn't hurt that the record totally rips, either. Arrive on time and don't avoid the openers, they might be the best part.


Mariner w/ Stella, CaveofswordS
The Demo
10 p.m. | $8
Post-hardcore group Mariner has been a roll lately: After their stunt as "Semen Allergy," the band has been playing high-profile gigs at the Demo and throwing shows for touring bands in their practice space. CaveofswordS, the stunning art rock outfit, just returned from a short tour through the midwest and plans to release a remix album of its latest record SIGILS in October. That qualifies as "being on a roll," too. Stella (from Evansville, Indiana) joins the locals for a Grovefest after party that will likely be packed with concert-goers who have spent half the day pre-gaming. You have been warned.


Ariana Grande
Scottrade Center
7:30 p.m. | $36.50-$66.50
Ariana Grande's rise in the pop charts might seem like a recent development, but industry fans saw her success coming from miles away. She was practically a child star, working for Nickelodeon until only last year, and won "Best Pop Video" in the 2014 MTV VMAs. She's no slouch when it comes to social justice either, as she's been a vocal supporter for LGBT rights and recently performed as part of LGBT Pride Week this past June.