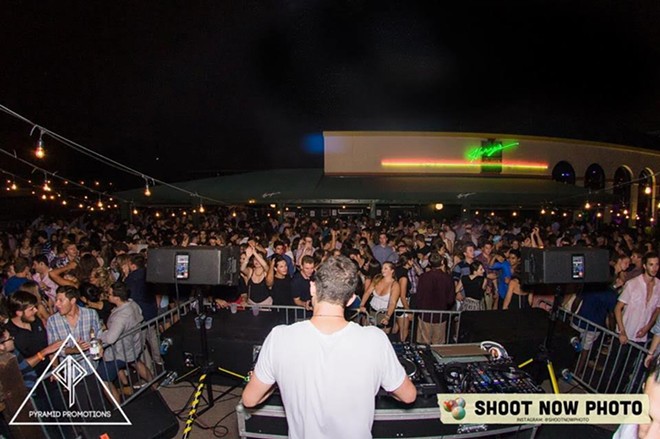 Sometimes we belong in a fraternity basement with watery beer, listening to Nelly sing about the heat. Sometimes we don’t. Pyramid Promotions is for those other times.


Roughly 100 people attended Pyramid’s debut event at Club Europe in November 2014. Washington University student Nate Stanfield was one of them.

“It was definitely different than a normal college party," he says. "It was more open, and at a real venue. They had a VIP section for Wash U students. A fair amount of kids went and I was pretty impressed with the turnout, for such a new organization.”


Just nine months later, Pyramid’s "welcome" event attracted more than ten times the crowd of its debut. The person who started it all was only in her sophomore year of college.


Hannah Perl grew up in New York City and went to school in the Bronx. Now she studies operations, finance and entrepreneurship at Washington University. She’s also the CEO and co-founder of Pyramid Promotions.


“It’s not every day that you wake up and just start a company," she says. "But Pyramid had been years in the making. I’ve been running large-scale events since my junior year in high school. My first event was a fundraiser for the Special Olympics, with around 300 people going. My senior year, I organized the winter homecoming and spring fest events. Those were each around 500 people.”


Perl saw an opportunity when she arrived in St. Louis. Along with her classmate and business partner Chandler Malone, she set out to pursue a very simple goal: burst the Wash U bubble.

“There’s something unique about our school," she says. "It’s a really close community as far as most universities go. But students get really caught up in our little bubble. From my experience, people don’t go out and experience what the city has to offer.”


Perl and Malone wasted no time in getting started.


“The first step for Pyramid was getting a following," Perl says. "You can have everything right — the venue booked, the music great, the security set — but if you don’t fill a room, it’s not going to be fun. Still, I knew my first event wasn’t going to have a lot of people there. No one really knew who I was yet.”


Between November and December of 2014, however, Pyramid put on three events, each more well-attended than the last. Their Facebook page started gathering more and more likes.


“We were quickly establishing ourselves as a company that can provide lots of guests and knows what they’re doing,” Perl explains.


But the duo wanted more control. As of December, Pyramid’s role was limited to securing tickets for students. Perl and Malone knew they were capable of organizing something big, from top to bottom.


“Come January, when students started returning from winter break, we knew we were ready," Perl says. "It was the first event that Chandler and I put together completely by ourselves. The venue, the DJ, everything. And it was a huge success. We had about 800 students come.”


Pyramid has since grown to include a few employees. Together, the team holds a deep understanding of Washington University’s social scene. But Perl recognizes that Pyramid’s next step is to integrate with other colleges across St. Louis.


“Wash U is my primary community, so I definitely cater to what they want and what they like," she says. "But the real purpose of Pyramid is to connect different college-age citizens to each other through nightlife events. We want to start with St. Louis University. And further down the road, we hope to do some events with Missouri State.”


Perls credits the city of St. Louis for being ripe with opportunity.


“St. Louis has so many cool venues and great DJs that are underutilized," she says. "The only thing I need to do is coordinate what students want with the resources available to me.”


Not every college student can claim to have started a company as successful as Pyramid Promotions. But at the end of the day, Perl is grateful for the people, not the company.


“Seeing so many people dancing and laughing feels so good," she says. "I can’t even explain. I get to the events an hour or two early and watch the room slowly fill. The first few people are always timid and shy but within an hour, everything sort of swells. I just want people to have a great time.”


For more information on Pyramid and their upcoming events, check out their official website.