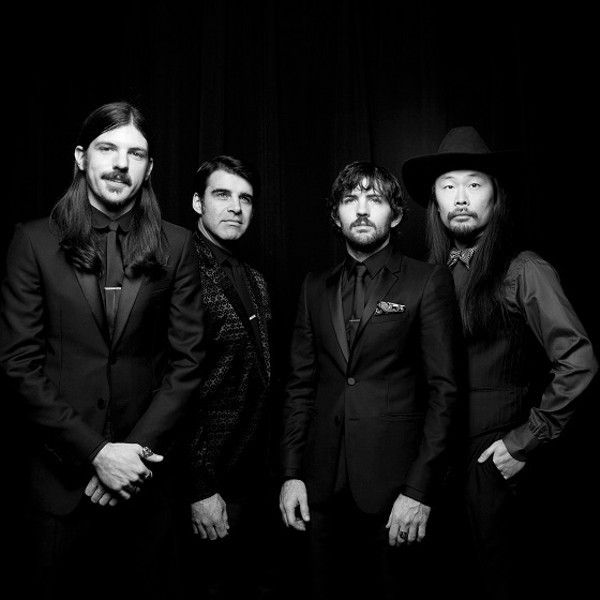 Music fans in St. Louis have never had a better scene than they do today. Venues in south city are packed with solid alternatives to LouFest, such as 2720 with Tu Fest, bringing roughly 30 bands across two stages on both Saturday and Sunday. The globe-trotting Arianna String Quartet sinks its roots into the Touhill for an eight month residency up through May 2016. Read more on two of the best festivals in town or look into low key shows in our guide for the weekend below.

FRIDAY, SEPTEMBER 11
Arianna String Quartet: Essential Arianna
Touhill Performing Arts Center
8 p.m. | $27
This night kicks off Arianna String Quartet's residency at the Touhill, which offers five concerts between September 11, 2015 and May 6, 2016. Based out of our fair river city, this renowned group has performed in several countries across five continents — but take our advice, it's much cheaper to catch world class players in your backyard than say, South Africa. This inaugural show offers a piece by contemporary composer Kevin Puts (born in St. Louis) as well as classics from Beethoven and Mozart.

Gwar w/ Butcher Babies, Battlecross, Thorhammer
Pop's Nightclub
7 p.m. | $18-$20
By Daniel Hill
When Gwar vocalist/mastermind Dave Brockie died of a heroin overdose in March 2014, many fans feared that the band of freaks he had assembled thirty years prior would die with him. A year and a half later, we can say with confidence that those fears were unfounded. Now fronted by Michael Bishop, who had previously been the band's bassist in the '80s and '90s, Gwar has embarked on several well-received tours in the aftermath of Brockie's death, performed at this year's Denver Riot Fest and even opened an “upscale dive bar” in Richmond that bears the group's name. Brockie had often expressed his wish that the band continue for as long as possible, even if he was no longer around. It is good to see that wish fulfilled.

Nashville Pussy w/ Valient Thorr, Bug Chaser
Old Rock House
7 p.m. | $15
Before you start to huff and/or puff, Nashville Pussy is one of two bands playing St. Louis this week with the p-word in their name — and the other is definitely more offensive. While this foursome features no felines (nor does it hail from Nashville), it brings a no-frills honest rock and roll that banks on sex, booze and other assorted cheap thrills. Bug Chaser brings layer upon noisy layer of psychedelic punk resting on a bedrock of dual drumming.

SATURDAY, SEPTEMBER 12
LouFest 2015 w/ the Avett Brothers, Hozier, Ludacris, Young the Giant, Brandon Flowers, Billy Idol, Nate Ruess, Umphrey's McGee, Lord Huron, JJ Grey & Mofro, Pokey LaFarge, Blue October, Misterwives, Albert Hammond Jr., Nico & Vinz, Robert Delong, Milo Greene, Knox Hamilton, Delta Rae, Strand of Oaks, Jessica Hernandez & the Deltas, Colony House, the Suffers, Walking Shapes, All Them Witches, Brave Baby, the Black Cadillacs, the Bros. Landreth, Hembree, Coin, Clockwork, American Wrestlers, KOA, Earl Burrows  Forest Park  11 a.m. (both Saturday and Sunday) | $95
Let's confront all the elephants in the room right away. Sure, the lineup for LouFest isn't as diverse or star-studded as years' past, but after Outkast's unbeatable finale in 2014, who could blame the promoters for dialing things back and returning to the alt-folk and indie-rock core? Not that other genres aren't represented, but the Avett Brothers are headlining with Hozier and Blue October in Forest Park. Five years ago, this city would have begged for an outdoor show of that magnitude. At this point, St. Louis is spoiled and LouFest is more than we deserve.

See also: LouFest Returns — and Fans Are Ready for the Fun

Money for Guns w/ Lina Uda, CaveofswordS Blueberry Hill  8 p.m. | $8
Money for Guns brings a lighter shade of alt-rock with chunky backbeats and clean melodic hooks. The vocals come varnished with a southern tinge, but the approach works to lead the songs as the guitars bob and weave, delivering a classy kick. CaveofswordS returns from tour on this day, so think of the show as a mini-homecoming of sorts and welcome the band back. And pick up SIGILS, released earlier this year on Boxing Clever Records, while you're at it.

Old Saints EP Release Show w/ Brother Lee and the Leather Jackals, the Wilderness  The Demo 8 p.m. | $10
For everything Old Saints has to say, the band lets its music do all the talking. The new video for "Gone," released just over one week ago, serves as an intro to the band and a preview of the upcoming EP. Old Saints are a polished blues band, but not without the kind of nicks and scratches that give any great group its charm. A little rough around the edges only makes the center seem smoother.

The Simple Pleasure w/ Thelonius Kryptonite, Brothers Lazaroff (as a duo)  Foam Coffee & Beer  8 p.m. | $5-$7
Dada meets dancey no-wave in the Simple Pleasure, a combo of technicolor dream boats slinging bright, quirky songs. New York natives Chad Raines and Admiral Grey have their tongues so firmly in cheek that they've long since torn through the skin, making for big, awkward face holes to sing through. While Raines collaborates with Amanda Palmer on the reg, Admiral Grey has fronted straight up noise rock bands, namely Cellular Chaos. Brothers Lazaroff performs as duo on this night, presenting a stripped down affair that's no less catchy and engaging.

Tü Fest Day One w/ Ahleuchatistas, 18andCounting, Medical Tourists, Oozing Wound and more
2720 Cherokee Performing Arts Center
3:30 p.m. | $20 (or $30 for the weekend)
The first night of Tu Fest (kick-off show at Blank Space on Friday notwithstanding) brings Charlotte, North Carolina's Ahleuchatistas, an experimental duo that works microtonal guitar into busy fusion beats, squeezing out a harrowing style of outsider rock that feels frantic and heavy-handed, despite its rather minimalist set-up. Another standout on Saturday's bill is Oozing Wound, a Chicago band that really hates being labeled as "thrash metal," despite cutting <i>Retrash</i>, one of the genre's best records in recent memory. The lineup offers sixteen acts over twelve straight hours of punk rock and noise living together. (Dogs and cats, mass hysteria.)

SUNDAY, SEPTEMBER 13
Bob Bucko Jr. w/ Strong Force, Tracy Andreotti and Alex Cunningham Duo
Foam Coffee & Beer 8 p.m. | $5
Bob Bucko Jr. works as an outlier, as likely to bring a single guitar for short, ethereal songs or a backing band slinging free-jazz skronk. In the last five years alone, he's had more releases than most musicians do songs — more than 40, in fact. A skip and hop through his backlog reveals just how much of a bad ass this Dubuque, Iowa boy can be, ranging from layered aural movements to humble songs played on a six-string.

Tü Fest Day Two w/ Times Beach, Military Police, Solid Attitude and more
2720 Cherokee Performing Arts Center
3:30 p.m. | $20 (or $30 for the weekend)
This closing night offers up two farewell shows from St. Louis ex-pat Mark Plant, who moved to Chicago last year just as his trio Times Beach hit its stride. Luckily, Plant is back in town to revisit the project for one final show while closing the book on Military Police, a synth-driven pile of odd pop that pummels with a booming drum machine. The full lineup brings more genre crossing from 3:30 to midnight, but arrive on time — opening act Catholic Guilt never plays the same set twice.