The Best Concerts in St. Louis This Week, September 8 to 13 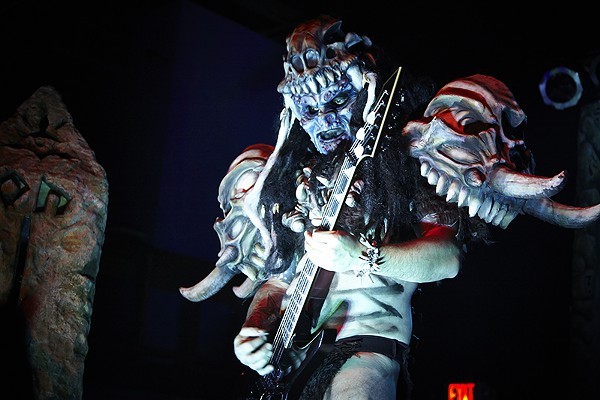 In a week packed with LouFest (and the more grassroots Tü Fest), huge events like Kid Rock with Foreigner at Hollywood Casino's Amphitheatre don't even rank on our list. One show that should be sold out but most definitely isn't is Bob Bucko Jr. on Sunday night at Foam — consider that the dark horse of this crazy month. Read about that event, and many more, in our guide to the week ahead.

TUESDAY, SEPTEMBER 8
The Mountain Goats (solo) w/ Heather McEntire from Mount Moriah
Off Broadway
8 p.m. | $20
By Roy Kasten
Rock music, whatever that is, has always had its word-drunk artistes. Blame Dylan if you like, but the Beatles and the Stones didn't take over the world because of haircuts and backbeats. Their words mattered. John Darnielle, the voice and vision of the Mountain Goats, may be a heavy-metal scholar, and his riffs may stand up to blasting from a boombox — for years his preferred recording method — but it's through his lyrics that he transcends. Arcane, dark and hilarious, his words are often as poignant as midnight confessions. Even when singing of professional wrestling, as he does on this year's brilliant Beat the Champ, his keen portraits and body-slamming rockers are praise songs at their purest.

One day, it is entirely possible that Lemmy Kilmister might die. No one really likes to think about it, but the 69-year-old rock legend has been showing signs of mortality in the last few years. Heart issues, diabetes and a bout of hematoma have been the diagnoses, while his physical appearance has grown more thin and frail. Most recently, Lemmy revealed in an interview with The Guardian that he has switched from his trademark Jack Daniels to Absolut vodka, reckoning that the latter is better for his health (though he also insists that he is “indestructible”). The whiskey may be the canary in the mine, though — better go to this show. Saxon and Crobot will open, though to call either of them “openers” would be a great disservice.

See also: Band Finds Its Own Stolen Gear For Sale by St. Louis-Based Seller on Ebay

THURSDAY, SEPTEMBER 10
Fishbone w/ Typewriter Tim, Downtown Brown
Blueberry Hill
9 p.m. | $25
By Shae Moseley
From the RFT Music archives: Fishbone formed in Los Angeles over 30 years ago. A seminal influence on the early wave of bands that fused together ska and reggae with other disparate genres, the band first struck gold with the single "Party at Ground Zero." As its career progressed, the band added heavy-metal guitars, punk edginess and soul-funk grooves to its sound, while largely avoiding the horrendous results common when bands mash genres together. Even though Fishbone's more recent albums (such as 2000's Fishbone and the Familyhood Nextperience Present: The Psychotic Friends Nuttwerx) have been less than successful on a commercial level, the band remains a well-oiled machine in concert.

FRIDAY, SEPTEMBER 11
Gwar w/ Butcher Babies, Battlecross, Thorhammer
Pop's Nightclub
7 p.m. | $18-$20
By Daniel Hill
When Gwar vocalist/mastermind Dave Brockie died of a heroin overdose in March 2014, many fans feared that the band of freaks he had assembled thirty years prior would die with him. A year and a half later, we can say with confidence that those fears were unfounded. Now fronted by Michael Bishop, who had previously been the band's bassist in the '80s and '90s, Gwar has embarked on several well-received tours in the aftermath of Brockie's death, performed at this year's Denver Riot Fest and even opened an “upscale dive bar” in Richmond that bears the group's name. Brockie had often expressed his wish that the band continue for as long as possible, even if he was no longer around. It is good to see that wish fulfilled.

SUNDAY, SEPTEMBER 13
Bob Bucko Jr. w/ Strong Force, Tracy Andreotti and Alex Cunningham Duo
Foam Coffee & Beer 8 p.m. | $5
By Joseph Hess
Bob Bucko Jr. mines through genres with little regard for labels or the people who make them. He works as an outlier, as likely to bring a single guitar for short, ethereal songs or a backing band slinging free-jazz skronk. In the last five years alone, he's had more releases than most musicians do songs — more than 40, in fact. While Bob is prolific, his quality never wavers. A skip and hop through his backlog reveals just how much of a bad ass this Dubuque, Iowa boy can be, ranging from layered aural movements to humble songs played on a six-string (baritone, at times). The local support on this night is decidedly string-focused, with Strong Force bringing rock riffs through a guitar and 2/3 of the Vernacular String Trio on violin and cello.