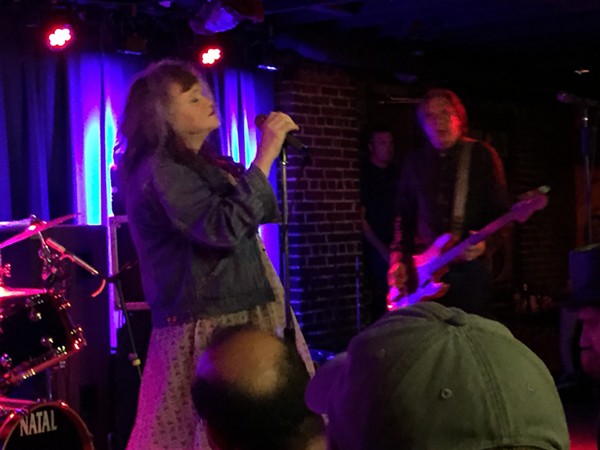 Anyone entering Blueberry Hill’s Duck Room on Tuesday night may have been surprised to find a crowd that looked more appropriate for Taste of St. Louis than punk pioneer X, who slated to perform. With the exception of one woman in leather pants and a patrolman-type hat (as well as the perpetually costumed Beatle Bob) cargo shorts and polo shirts dominated an audience whose median age could be pegged somewhere in the mid-fifties.


“If this was 1980, you’d probably be throwing stuff at us,” said Frank Drennen, the male half of the group.

“The Everlys were the progenitors of what X are doing,” Drennen said after the set, referring to the harmonic interplay between Doe and Cervenka. “Folk music was the original punk rock…  All those guys who think, ‘Oh, punk set it free.’ Uh-uh.  Woody Guthrie set it free. Woody Guthrie was the original punk rocker. And he was for the people, and he was of the people, and that’s what punk rock is to me.”


And though no one would confuse Dead Rock West with traditional punk, it was obvious by the second song that something special lied in the vocal interaction between Drennen and Wasserman.  So frequently and perfectly their voices locked together, it was almost surprising when one or the other would break into a solo.  Also surprising was the size of the crowd that showed up to see the group.  While venues are frequently a quarter full for the opening act, the Duck Room was noticeably packed by the time Drennen and Wasserman took the stage.

“I think X fans are very gracious, they’re very smart," Drennen said.  “I think they are also, like, ‘If they take Dead Rock West on tour with them, they must be cool.’  It’s been consistently full or packed when we play, and I attribute that to X.”

Right at the point one might start to wonder if they had walked into some parallel universe version of X — the pitch-perfect harmonies of Drennen and his partner Cindy Wasserman providing a soothing counterpoint to the faster harmonies of years past from Exene Cervenka and John Doe — the actual members of X appeared.  The band joined Dead Rock West on its final song, “This May Be the Last Time,” with Drennen, Wasserman, Cervenka and Doe all sharing vocal duties. 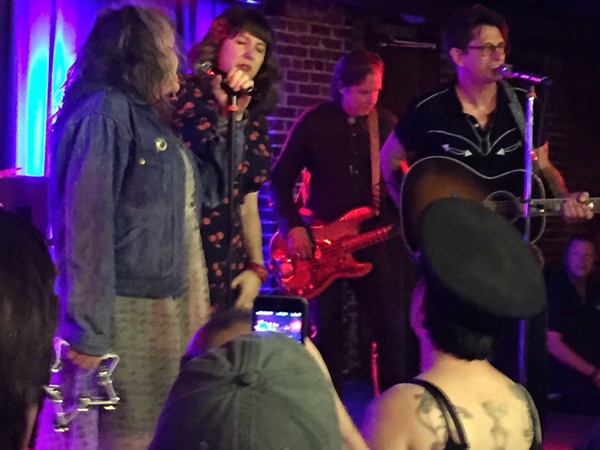 The number of people in attendance only grew by the time X took the stage, and they stayed throughout the band’s set — which lasted over an hour.


Though it was written long ago that punk had grown up, X’s performance may serve as proof that it has now transitioned into music for (newer, well-cultured) grandparents.  And while an older crowd and an acoustic duo may sound like a night out at the yacht club, by the time X took the stage for its set the aggression and debauchery associated with the genre began to rear its head.  As the band tore into opener "Your Phone's Off the Hook, But You're Not” a woman in front of the stage could be seen accidentally spilling her Miller Lite all over the place, and this writer was punched in the back of the head multiple times while attempting to get pictures.


And while X has aged right along with its crowd, it would be impossible to tell with eyes closed.  The vocal interplay between Doe and Cervenka sounded just as fresh as it did on 1980’s Los Angeles and drummer DJ Bonebrake was still spot on, even breaking at a point for a short solo — another rarity for a punk show.


But with eyes open, a person would become quickly aware of guitarist Billy Zoom’s notable absence.  According to Doe, Zoom was back in Los Angeles receiving treatment for bladder cancer; in his stead was Austin-based guitarist Jesse Dayton. Dayton nailed all of Zoom’s original parts.

At one point, Cervenka mentioned how nice it was to “be in Chuck Berry’s Duck Room,” and from then on it was hard not to notice how many of Zoom’s lead parts (as interpreted by Dayton) were sped-up versions of lines Berry had laid years earlier.  In total, the show was not just another chance for long time fans to see X — described by Drennen as “the west coast Ramones” — but rather an education in the growth of American rock music — from Berry to the Everlys to punk — and how X managed to weave all of the strands together.


The band treated the crowd to song after song from Los Angeles and Wild Gift — both ranked in Rolling Stone’s top 500 albums of all time — showing both joy and precision for songs it had released over thirty years ago.  It was like no time had passed at all...if you just closed your eyes.