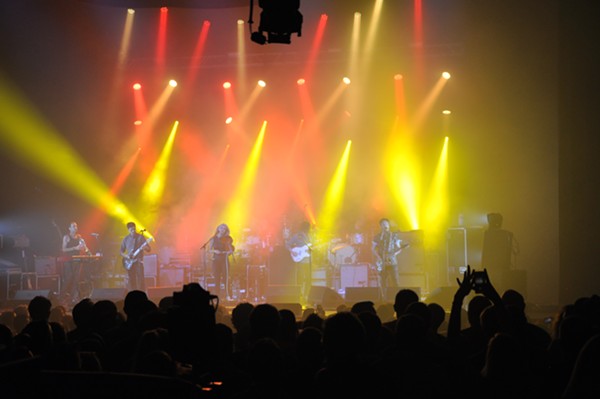 Isaac Brock is one infectious dude. From the first notes of “The World At Large,” it was obvious: When the man is on stage with a guitar in hand, any Modest Mouse fan, fairweather or diehard, cannot resist being sucked into his gravity. At the Pageant last night, Brock commanded a sold-out crowd that was equally engaged when the band played Billboard-ranking singles as when it dusted off twenty year old b-sides.

Opening act Morning Teleportation played a psychedelic take on indie-rock-since-2000, heavy on My Morning Jacket jam crossover with detours at Arcade Fire yelps, Vampire Weekend tropical beats and some Franz Ferdinand funk. The band had enough tempo changes to keep the crowd interested, and singer/guitarist Tiger Merritt earned a healthy round of “Woos” when doing some heavily-effected finger tapping. Morning Teleportation made some new fans — especially those who Google the band the morning after to find that the group’s sole full length Expanding Anyway was produced by none other than Isaac Brock.

Then came the main event. The most notable aspect of a Modest Mouse show circa 2015 is the sheer number of bodies on stage: eight, or the number of remaining original members cubed. Brock and drummer Jeremiah Green were joined by a percussionist, violinist and four multi-taskers who switched between guitars, synths, bass, ukulele, coronet, upright bass and tuba. It was apparent that this lineup exists to create this year’s Strangers To Ourselves. New album tracks “Lampshades On Fire” and “Ansel” sounded nearly identical to the album in the best way possible.


The set of twenty songs largely relied on the band’s material since 2004’s Good News For People Who Love Bad News, but dug into some surprisingly deep cuts (“Broke,” “Grey Ice Water,” “Night On The Sun”). The set list seemed to be decided based on what songs this lineup could absolutely slay. “Dark Center Of The Universe” was an early highlight and possibly the best performance of the night, with the octet catching every intricacy of the legendary recording while maintaining the rawness you want from a live band. Throughout the set, I was particularly impressed with the interplay between drummer Jeremiah Green and percussionist Ben Massarella, working together to recreate the polyrhythmic arrangement of “Missed The Boat” and deepening the groove on “Tiny Cities Made Of Ashes.”

While the band impressed, it was truly the Isaac Brock show. I suspect that many who arrived considering Brock a singer/songwriter left calling him a guitar hero. “Doin’ The Cockroach” expanded into a Sonic Youth-esque jam before Brock flipped his guitar up and screamed a few verses into the pickups. It’s a trick I’ve seen (and personally attempted) before, but I’ve never witnessed somebody so committed. The resulting distorted vocals sounded like something from a Lightning Bolt record. It ruled.


A few days before this show, RFT Music posted an article outlining my complicated relationship with Modest Mouse’s discography. If I saw the setlist of the show last night, my hipster douchebag ass would probably scoff. Truthfully, some of the newer songs such as “Shit In Your Cut” and “Sugar Boats” made more sense as Modest Mouse tunes when played live. But even when the band played two of my least favorite songs (the banjo-led “Satin In A Coffin” and “The Devil’s Workday”) in a freaking row, I was still sucked into the Brock hole. Moral of the story: Modest Mouse is still the Modest Mouse I love. There’s just more of them now.

1. The World At Large

2. Dark Center Of The Universe

9. Satin In A Coffin

18. Tiny Cities Made Of Ashes