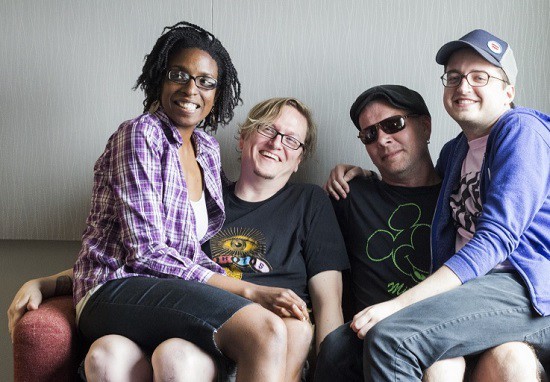 Between two festivals, two tribute nights, an album release, one band's final gig and a stacked benefit show for a beloved St. Louis musician, this weekend is overflowing with reasons to go out. It's easy to forget that our city's biggest concert is barely two weeks away, but LouFest has too much to live up to — these last 12 months have been unreal. Revel in your music scene, St. Louis. You've earned it.

FRIDAY, AUGUST 28
Pretty Little Empire
w/ The Lonesome Heroes, Town Cars
The Bootleg
8 p.m. | $8
Not every show needs to be a twenty-band festival or some overblown arena rock gig packing the lawn over at Riverport (yeah yeah, we're supposed to call it Hollywood Casino Amphitheatre now). Songwriter Justin Johnson and his group Pretty Little Empire lead a night of no-frills indie-rock that features songstress Melinda Cooper and her group Town Cars, whom readers should already know considering how many times the band has been nominated for an RFT Music Award. This night might be a little more laid back from other shows this weekend, but at least you won't have to wade through hours of other bands to get your fix.

Pat Sajak Assassins
w/ Traveling Sound Machine, Hands and Feet
Foam Coffee & Beer
8 p.m. | $5
Pat Sajak Assassins have taken the form of a solid rock band in recent years, all without the use of a classic six-string. Instead, keys lay atop a bed of drums and bass, bringing wiry synth riffs with subtle interlocking lines. With this band, melodies seem to spring up and loop around, making for a musical smoke and mirrors where no one can tell where one hook ends and the next begins.

Pepperland: A Tribute to the Beatles
w/ Moondog Acoustic
Off Broadway
9 p.m. | $10
As Pepperland picks up steam outside St. Louis, Beatles fans within city limits should take notice — one of the tightest tributes to the very band that's "more popular than Jesus" resides right here in the River City. This night marks a homecoming as Pepperland headlines this night alongside Rolling Stones tribute act Moondog Acoustic.

SATURDAY, AUGUST 29
A Benefit For Drew Franklin
w/ Big Brother Thunder & the Masterblasters, Thunder Biscuit Orchestra, Mathias & The Pirates, Illphonics, Blank Generation, Love Jones, DJ Mahf
Old Rock House
8 p.m. | $10
Two months ago, Andrew Franklin of Big Brother Thunder & the Masterblasters was diagnosed with cancer. Players from the funk, soul and hip-hop scenes have united to raise funds, but going to this show isn't the only way to participate and give. A gofundme page has been set up and, as I'm writing this article, the campaign is just shy of its $4,000 goal.

B&E Reunion/Album Release Show
w/ Shark Dad
The Firebird
9 p.m. | $8
While B&E celebrates the release of a new record, Shark Dad unleashed its own debut only weeks ago. A Bigger Boat comes crammed with rough-edged indie rock and a lyric sheet that reads like one half dad jokes, one half commentary on middle-age. The humor is more subtle and offers a tongue firmly-in-cheek, which is a refreshing change from the common ends of the rock spectrum — brooding vibes or full-on party songs. Classy hooks can be found here, and you don't need to dig very deep to find them.

Heatwave Music Fest 2015
w/ Satellite Theory, As Earth Shatters, Make Room, the Pachyderms, Pick Your Poison, City of Parks, Common Jones, Hollow Point, Day of Redemptions, Outcome of Betrayal, Inner Outlines
Pop's Nightclub
4 p.m. | $10-$13
When shows hit that sweet spot of roughly $1 per band, it's easy to dismiss the fact that you're barely even paying for the show. Heatwave brings triumphant metal and heavy rock outfits darkened by a thick gothic vibe across two stages, which will look like islands in a sea of moving bodies covered in black shirts and tattoos. Go against the grain — wear a bright turquoise dress with sequins.

Memories of Elvis with Steve Davis
w/ Double Trouble, Rivertown Sound, Thomas Hickey as Buddy, Holly Anna Blair as Patsy Cline
Blueberry Hill
8 p.m. | $20
Tribute bands have reached critical mass and this show is the breaking point. The Beatles and Elvis in the same weekend? St. Louis should only be so lucky. But let's be honest, part of the fun with these tribute acts is to watch the bands have so much fun that they fall out of character altogether.