Band Finds Its Own Stolen Gear For Sale by St. Louis-Based Seller on Ebay 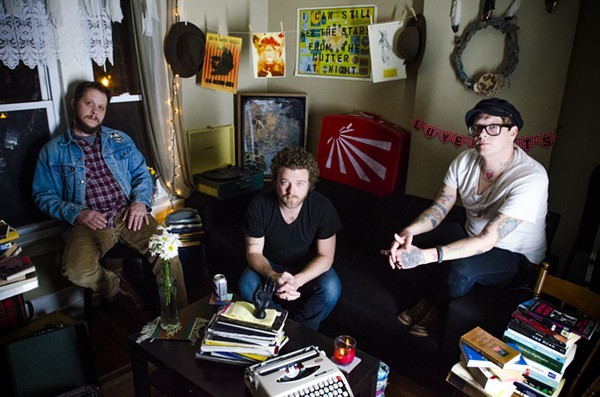 Enter the phrase “bands robbed” into Bing, and the website will dutifully suggest that you complete your search with the phrase “in St. Louis.” While the recent spike in band-owned vehicle break-ins in the area has been infuriating for artists, venue owners and music fans alike, equally vexing is the thought that there must be a simple way to solve at least one of these crimes.

Someone just needs to return a phone call.

Attempting to replace over $10,000 in gear stolen after a show in St. Louis last March, Two Cow Garage’s David Murphy made an amazing discovery while searching for replacements on Ebay: the band’s own equipment. According to Murphy, Ebay says they will release the seller’s information to the St. Louis Police, but the police will not return their call.

Dan Howard, captain of the St. Louis Metro Police Department’s fourth district, however, says the problem runs in the opposite direction — that Ebay will not return calls from police.

“I get it,” Murphy says,”[that] whoever is popping a lock or smashing a window is probably not the same guy who is selling it online. But still, there’s a funnel there somewhere. To have that person shut down would be awesome, and to know that there was a shot at that [which] was completely fumbled — it’s frustrating as hell.”

Murphy’s frustrations began the morning of March 25. The group played the Demo the night before and, familiar with the rash of break-ins in the city, had taken extra precautions to secure its van and gear by parking in the covered, gated lot attached to the Sheraton Hotel on Fourteenth Street. The extra safeguards were all for naught, however, as thieves navigated their way around the lot's enhanced security and cleaned out all of the band’s equipment.

“They popped the driver’s lock,” Murphy remembers. “They didn’t even chip the paint on it; they did a really clean job . Then you could see where they had wiped down like a six-inch diameter around every door handle. They knew what they were doing.”

A hotel employee called police and the band members gave a statement and then left to play their next gig in Minnesota, borrowing equipment to finish out the tour. Hours later, a fan and radio DJ in Denver started an online fundraising campaign that would net more than $12,000 before the band asked for it to be shut down in order not to “gouge” fans, according to Murphy.

Then, as the band began shopping for replacement equipment, they found exactly what they were looking for. Literally.

One of the first pieces they tried to replace was a unique guitar owned by guitarist Todd Farrell, Jr.

“There’s not a lot of them out there,” Murphy says. “So we go online and start looking and sure enough there’s one out there on Ebay in one of the suburbs north of St. Louis. The serial number was on there, and the last number of the serial number was different than ours — everything else was the same. Ours either ended up in a six or a nine and this one was the opposite of that six or nine. If someone knew what they were doing they could just grab it on Photoshop and turn it upside down.”

Next: the band bids on the equipment.


Singer Micah Schnabel bid on the guitar, thinking, according to Murphy, that the worst case would be they got a good deal. Best case, they found the person selling their stolen gear.

Schnabel won the bid and asked if the guitar could be shipped to Farrell in Nashville, explaining that the band recently had a bunch of equipment stolen. As soon as he made mention of the theft, the seller refunded Schnabel’s money via PayPal and blocked him on the site. Some quick investigation revealed that the seller, who went by the username “OnlyTheBestGadgets,” was placing all of the band’s missing equipment up for auction.

Though the account has since been disabled, Ebay still allows for a search of user feedback on items OnlyTheBestGadgets sold over the past six months. Guitar pedals, cameras and computers are highlights of past sales, all of which would very likely be found in the van of a band on tour.

Around the same time he discovered the account, Murphy was put in touch with Detective John Anderson from the St. Louis Metro Police Department’s fourth district. Murphy gave the detective a complete list of the items stolen from the van, including serial numbers for most of the instruments. Anderson was initially responsive, Murphy says, but eventually stopped returning the drummer’s calls.

“He spoke to them over thirty times,” Howard says, adding that Anderson had become “the biggest joke in the bureau” for how often he would talk to the band.

While Murphy agrees that he initially was frequently in contact with Anderson, he says many of the detective’s unprompted calls had little to do with the specific equipment the band had reported missing.

“He started calling me with, I think the first one he was like, ‘Hey I wanted to touch base with you. We got some information on a possible music gear theft. Did you by chance have a red drum set?’” Murphy recalls. “And we did not. I had given him information like ‘drum set by Yamaha, color blue or black.’ It would be like if I called you and you had a yellow Mustang stolen and I asked if you had a red Cobalt stolen, stuff like that. He and his partner drove to central Illinois to look at something and whatever that thing was was completely different than anything we had given him.”

In one of these calls, Murphy mentioned the Ebay account to Anderson and provided him the various auction numbers. He says Anderson told him that it was extremely hard to subpoena information from Ebay without “a body” — that a physical person must be caught with the merchandise — otherwise someone could just be pretending to be someone else on the Internet.

Frustrated, Murphy turned to social media to see if the band had any contacts within Ebay. Through a friend of a friend in Salt Lake City, he was put in touch with a person named Christian in the global asset protection department. Christian was ready to work with Detective Anderson on releasing user information for OnlyTheBestGadgets to the St. Louis Police.

“I have reached out to Det. Anderson and have not yet heard back,” Christian wrote in an email to Murphy dated May 4. “Have you spoken with the Det?”

“No,” Murphy responded. “I've tried multiple times to contact him. He and I were talking quite a bit for a while and then he just kind of disappeared.”

Captain Howard says he “doesn’t believe” that Ebay has tried to contact the department. Howard claims he’s seen phone calls and email strings showing that, instead, Detective Anderson has attempted to contact Ebay and that the site has “fell off the face of the earth.”

“He has no reason, no motivation not to solve the problem,” Howard says of Anderson. “He hasn’t given up on the case. It’s not on a shelf.”

But Ryan Moore, senior manager of Ebay’s global corporate affairs and communications, says that Christian called and left messages for Anderson twice to no avail back in May. Moore also says that the global assets protection team reached out once again when contacted for this story, also to no response.

As the police and Ebay continue their game of he-said-he-said, the most frustrating part is that user information for OnlyTheBestGadgets is still available — if only the two parties could somehow contact each other. Even though the user has since disabled the account, Moore says Ebay could still access the records from April.

“Unreal,” Murphy says when told the police could still obtain the user info. “I know they have bigger and better things to worry about — matter of fact, when the one guy was originally doing our police report he got a call in for a shooting… But you would think at some point you get any kind of info, that they were looking into anything that might be on that list in front of them.

“I mean he apparently couldn’t get through to Ebay — I made that part happen,” he adds. “I felt like I put in the time, and then just to hear it turned into a joke at the station? That sucks.”