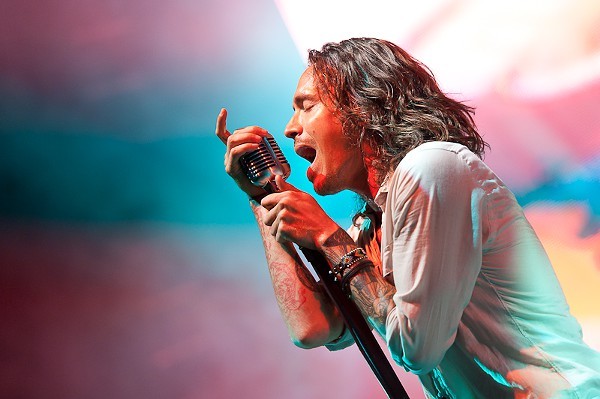 With the Underground Styles Music Hip-Hop Festival at Fubar and Whiskey War out in St. Charles, this weekend brings a festival vibe mere weeks before LouFest. Really, when did St. Louis start its love affair with large-scale music events? This is a good sign of a healthy scene, and whether you're into huge productions or tighter gigs scattered across south city, there's much to see and hear in and around St. Louis. Our top pick for the week? A fundraiser to benefit a skate park inside a re-purposed church. It's like a scene from TMNT 2: Secret of the Ooze.

Cruelster
w/ Ruz
Friday, August 21
Foam Coffee & Beer
10 p.m. | $7
Foam, the mid-sized coffeehouse on the corner of Cherokee and Jefferson, has somehow become a nexus for punk and hardcore. Ten years ago, a spot of its kind would never host Cleveland's Cruelster, the sneering foursome that brings heavy downbeats under a shrill guitar mess. The band grinds out songs that sit right under the two-minute mark, which is more than enough time to get the point across. Heavy, heady tunes fill a rather quaint coffee shop on a Friday night. Word is, there's a third, unnamed band opening the show, so arrive on time.

Incubus
w/ Deftones, Death from Above 1979, the Bots
Friday, August 21
Hollywood Casino Amphitheatre
5 p.m. | $57
While I could say this lineup was every teenager's wet dream in the early aughts, that would dismiss the fact that, well, it's STILL a stellar rock show. Death from Above has mostly sat as college radio darlings for the better part of a decade while Deftones have hit just shy of the overblown arena rock mark. Not Incubus though — just so you know the hierarchy here. I would say expect pre- and post-show drum circles on the lawn, but security will be strict. Pregame with djembes in the parking lot.

Party Time at the Church of Sk8tan
Friday, August 21
Sk8 Liborius
7 p.m. | $5
By Daniel Hill
This is one of those shows for which the venue itself is half the appeal. Sure, the entertainment is solid — artists from as far as New Zealand, Texas and Tennessee will perform alongside up-and-coming St. Louis-based acts, the majority of them punk-influenced in on way or another — but the Church of Sk8tan (or Sk8 Liborius, as it is sometimes called) is a true gem. An actual, legit church that has been taken over by skateboarders. Sk8 Liborius has ramps built in the area that would have once held the congregation, stretching all the way up onto the altar. Brought to you by the same folks who converted the space beneath the Kingshighway bridge into a guerrilla skate park, it is a one-of-a-kind space that must be seen to be believed.

Dramatic Acid
w/ Con, Ciej, Mir, Darius Hickman, Chillz, Anthony Lucius, the BigDude Rosegoldman, Meech & Driz, Nick Swisher
Saturday, August 22
Pop's
7 p.m. | $5-$8
While this show isn't billed as a hip-hop "fest," expect that kind of atmosphere with a stacked list of acts — no less than three coming from the MME crew, which should turn any jaded rap fan into a true believer. Less than ten bucks nets as many acts crammed into a tight 6 hour pocket of back-to-back performances. While we could wax about how young and innate these rappers are, age doesn't really come into factor here. This is the current state of affairs in local hip-hop.


Michael McDonald
w/ Brian Owens
Saturday, August 22
The Sheldon
7 p.m. | $79
By Christian Schaeffer
Up until about a year ago, Michael McDonald was the most famous export to come out of Ferguson, Missouri. His history as a vocalist in Steely Dan, the Doobie Brothers and his solo work is written all over rock radio of yore, and his late-career covers of Motown and soul classics underlined why his are the only blue eyes that matter in blue-eyed soul. Expect an intimate, career-spanning set with, hopefully, some tributes to the sounds (and the city) that formed him.

Rob Funkhouser
w/ Trancers, The Brainstems, Bad Dates
Saturday, August 22
Schlafly Tap Room
9 p.m. | free
Rob Funkhouser takes a free-for-all approach to percussion, building his own set of gamelan drums from thrift store finds. When the Indiana-native played the Tap Room back in January, he kept the crowd captive, unpeeling layers of brainy beats and subtle sound manipulation. He returns on this night after a busy half-year packed with new releases, including a cassette tape on St. Louis' Don't Touch My Records, headed up by Bad Dates' Gabe Karabell.


Underground Styles Hip-Hop Music Festival
w/ Preach, Bates, Beastmode and more
Saturday, August 22
Fubar
5 p.m. | $10
If the show at Pop's wasn't your flavor, or you're looking for that festival vibe and the Whiskey War Fest doesn't quite scratch that itch (or you don't want to brave highway 70), Fubar's own Underground Styles Hip-Hop Music Festival kicks off at 5 p.m. For the next eight hours (that's a full work day, for some), expect back-to-back acts with tight stage production that climbs with intensity as the night goes on.

Earlier this week I spoke to brothers Jake and David Maness about their annual Whiskey War Fest, an all day, four stage event happening just off of Main Street in St. Charles. The lineup brings a more varied vibe than in years' past, thanks to bands such as Blank Generation and Illphonics. And if you're like me, pale and deathly afraid of direct sunlight, there are four stages in all — two of them indoors. Something for everyone, including the nocturnal.

Shark Muffin
w/ BIg Blonde, Lost Boy, Moon Glampers
Sunday, August 23
The Firebird
7:30 p.m. | $8
Blues-infused but never all-in for rock standards, Shark Muffin brings a loose-fitting surf outfit that never hinges on solos or other gimmicks, for that matter. This trio trims the fat that otherwise bogs down similar bands who wear out their welcome, bringing taut, catchy riffs with a straight ahead rip on the drums. Classy songs with just a tinge of sass.


Tunic
w/ Skin Tags, Ish,Cadenaxo
Sunday, August 23
Foam Coffee & Beer
8 p.m. | $5
Before calling Tunic noise rock, it's important to note that the genre has two pretty distinct schools of thought. The first being noise rock, where the former half is emphasized, bringing atonal sections either through guitar or some other kind of electronic accompaniment. Bands in this camp emphasize the way everything sounds with less focus on structure or traditional songwriting. The band in question, Tunic, is of the noise rock ilk, which drags otherwise heavy riffs through an audible muck, slotting its bursts of sound into tight, discernible tracks. While we could sit here and educate you on the nuances of the whole genre, we recommend just seeing Tunic live and in-person.