When Dave Grohl asks, “Who wants to hear me scream?” don't expect to have a say in the matter. Last night, he took every liberty to bust out a classic rock howl before, during and after what was damn near three hours of Foo Fighters music, cover songs and backyard banter. He referred to Hollywood Casino Amphitheatre's lawn as his “keg party” – not that anyone there would disagree.

Growing up, Grohl's voice or his drums (via Nirvana) were in constant rotation in my home. My mom is a Foo Fighters devotee – her encyclopedic knowledge of the band (and the man behind it) comes from one part Sonic Highways and nine parts independent study. Biographies, authorized or not, are an easy birthday or X-mas gift. So it's no surprise that I would bring her along to guide me through a winding setlist that spanned twenty years of albums and singles.

As the night went on, my mom's quick wit and all-encompassing knowledge dipped as she drank to keep up with Grohl on-stage. Fortunately, I absorbed some of her good taste through the years and recognized most of the set. Not that anyone would need to be familiar with the songs to enjoy them – but that's part of the deal with big rock & roll shows: Participation is required. Not singing along feels like being in the packed pews of a church, not knowing a single prayer.

Foo Fighters kicked off the set with two singles from The Colour and the Shape, the band's seminal 1997 debut (and I say “the band's” because the first record was mostly a solo effort by Grohl). “Everlong” could be Foo Fighter's most infallible song (with an equally perfect music video directed by Michel Gondry), and I'm happy that it was performed at full volume. That song, in particular, has the tendency to pop up in stripped down form, owing to a famous acoustic performance on Howard Stern's radio show in 1998.

“Monkey Wrench” followed and Grohl started the broken leg jokes in earnest. “See me do a little dance,” he said. Drummer Taylor Hawkins pulled out his first solo of the night before reining things in for “Learn to Fly.” With two decades of singles and hit videos (let's not forget that the band ruled MTV in the '90s), Foo Fighters could blindly toss a handful of darts at their discography and hit any number of bulls-eyes. And it did.

From the blazing middle fingers of Sonic Highways' “Something From Nothing” (complete with a break that screams “FUCK IT ALL”) to the ballad-like start of “The Pretender” from 2007's Echoes, Silence, Patience & Grace, the set spanned the band's full spectrum. After “Big Me,” Grohl performed what could have been a full stand-up routine – pun intended, as he was obviously sitting down on his Game of Thrones-styled rock chair.

“Guess what? I broke my fucking leg!” That you did, Dave. He went from narrating his recent fall in Sweden, shown on the venues' monitors, to joking about having t-shirts made. But it's no laughing matter; those shirts were expensive as hell and most definitely available for purchase. He went on to mock himself for his throne of guitars and laser lights, showing his bedside sketch. He prodded the audience, asking them if they wanted the one, one and a half, two or three hour shows. Of course, he milked it. Why not? The rest of the band needed a break at some point.

“He's such an attention whore,” my mom says. Even his most devoted of fans know this much, and still love him for it. Really, his banter made me wonder if certain rockstars shouldn't pursue a career in stand-up comedy. It's certainly less equipment to set up.

But if Grohl didn't have a road crew, he wouldn't have been able to do what he did next: a dedication to them to the tune of “Congregation.” He even gave the lighting guys a break, calling on the audience to light up the night via cellphone flashlights. Even ten years ago, the scene would have been a field of lighters. Not so much anymore.

The lights came on for “Walk” and the band started goofing off with some disjointed medley of Van Halen solos. These half-cocked covers took only sections of “Panama” and “Ain't Talkin' Bout Love,” but that was enough to get the point across. Those songs segued into “Cold Day in the Sun,” sang by drummer Taylor Hawkins, who really does the classic hair metal voice better than Grohl ever could (he's got the look down, too).

The king came down from his throne to sit on a small stool, closer to the audience. The lights came down for “Skin and Bones,” with Rami on accordion. He followed with “My Hero,” with what I'm sure was around 30 grown men crying in the audience in hopes of being invited on stage. You brought that one upon yourself, Dave.

On this tour, Grohl has made headlines by inviting fans on stage to sing or drum or to simply stand there while he plays guitar in their face. Last night had no such gimmicks, unless you want to count his “keg party.”

After his leg cast guitar solo on “Outside” and an album-perfect performance of “Breakout,” the banter came back with more reference to said “keg party.” A cover of Queen & David Bowie's “Under Pressure” followed, with Hawkins on vocal duty. The band followed with another cover of the Stones' “Miss You” with Pat Smear popping a bottle of champagne for Grohl. I wonder how Smear would feel about my mom saying, “Oh I really like him. He just leaves the band whenever he wants. Watch Sonic Highways, he's really cool.”

Foo Fighters blew through the next six or so songs before setting up a one-two punch of “Best of You” and their own rendition of AC/DC's “Let There Be Rock,” which, for the record, is scores better than the original. Just keep that one for yourselves. 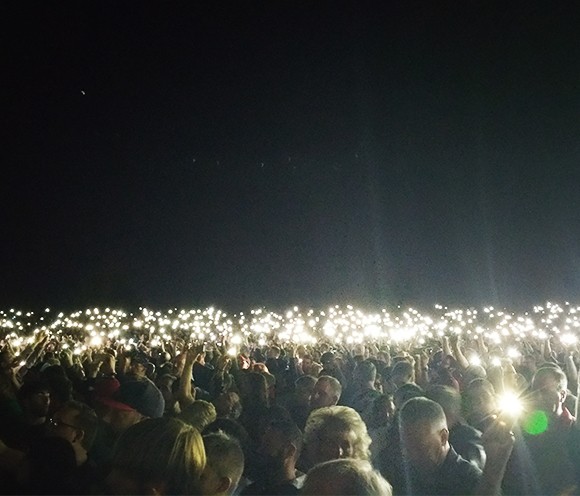 The monitors cast a multi-view of the performers, complete with panned close-ups and color coordinated drops with angle cuts on beat. Certain songs had specific graphics overlaying the live video, with strobes working in tandem to intensify major beats while solo sections were emphasized with fast-acting lights.


The audio mix was solid but there was a dip in vocal quality halfway through. Whether that was a technical issue or just a lull in performance is irrelevant. This is rock & roll, so there's no need to be perfect. The high volume was welcomed, and even from the press seats (four rows firmly behind the center boxes), the guitar felt like it could have been too loud for some. But screw those people.

My mom kept leaving for drinks and I followed. Every time we scooted by, some man patted me on the shoulders like we were old buddies. I guess that's just the kind of show that it was.

Grohl said earlier in the night that they weren't the type of band to “walk off the stage and then come back and shit,” and he kept his word. Really, much was said in the spirit of spontaneity to make the show feel like more of a backyard BBQ than an overblown arena rock production. But this night was over-the-top from start to finish.

"It's so loud right now, my ears are like, totally gone."

"Thing came outta fuckin' nowhere." (In reference to the accordion.)

"There are more lines here than a crack house selling cocaine."