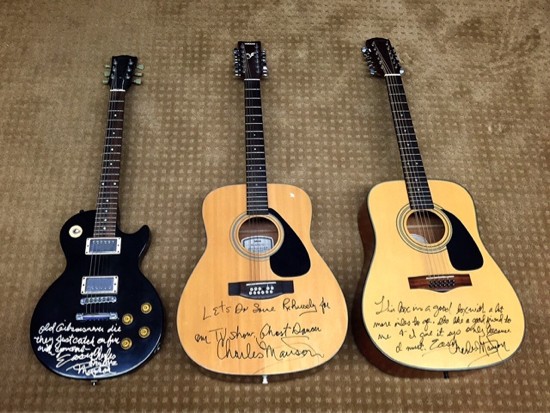 Some rather unusual music memorabilia is up for sale today in St. Louis county. Three guitars, all hand-signed by notorious serial killer Charles Manson are available for purchase.

Manson may be a vile human, but by all accounts he was a gifted songwriter who had worked with a number of prominent musicians -- including the Beach Boys, who recorded at least one of his songs. Before he became the most notorious crazy-eyed killer in U.S. history, Manson was very involved with the southern California music scene and could count people like Neil Young among his close friends.

Brandi Shufeldt, estate sales manager at Lindstrom & McKenney, Inc., says her company is selling these guitars on behalf of an older man who lives in Chesterfield and is in the process of downsizing. Shufeldt won't give up his name, but says that he acquired the guitars because he's an author with an interest in researching serial killers.

Shufeldt explains, "He was writing a biography on Charles Manson. He was visiting the prison and having visits and getting stories and information. And in that exchange of time, in visiting the prison, they became quite good friends and he [Manson] autographed the guitars for him, in addition to many other things."

And that's not all. Shufeldt says that this mystery man has apparently worked with ten to twenty different serial killers during his research, but has not yet published his book. She points to an unmarked clock high on a shelf and says that it was made by controversial serial killer Henry Lee Lucas and given to our mystery writer.

Lindstrom & McKenney is a classic type of estate business, clearly more comfortable in dealing with sterling serving platters than items of this odd pedigree. They have not yet seemed to realize the market for these types of one-of-a-kinds.

"I first listed them as 'autographed guitars,' without saying who had signed them," Shufeldt explained. "I had about ten to fifteen people the first morning of the sale wanting to come in to buy the guitars, but then when they saw who signed them and they backed off. So then I thought, 'Maybe I'd better go with full disclosure.' So many people just don't even want to touch them. Somebody said that we should take some paint thinner to them and get rid of the inscriptions entirely."

Here is the information on the guitars:

The two acoustics: - "Let's do some rhapsody for our TV show Ghost Dancer" - "This box is a good box with a lot more miles to go. It's like a good friend to me and I give it up only because I must." - priced at $1,000 each

Two of the three are signed: "Easy, Charles Manson"

So if you're the special kind of buyer who is searching for just the right piece of serial killer memorabilia to complete your weird little collection, get to Lindstrom & McKenney. The sale ends today at 2 p.m. Information is here. See next page for more photos. 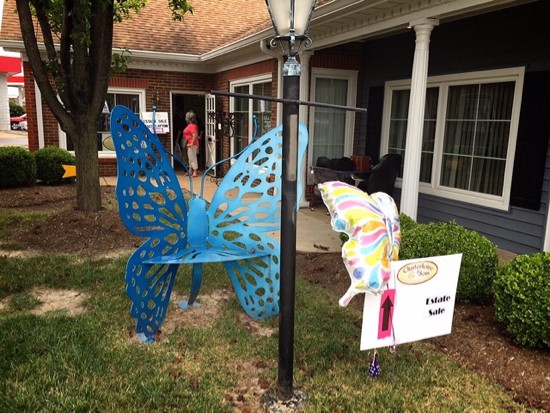