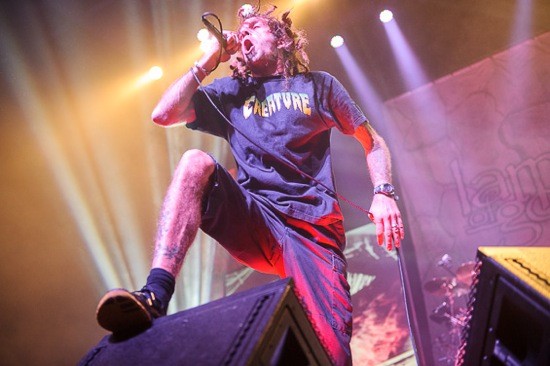 Plenty of shows this weekend to hold your attention -- and more than a few of them are completely free of charge! Even cheapskates deserve to see some great music every now and again. This one's for you guys.

Music at the Intersection -- Hip-hop and Soul Friday, August 14 Grand Center 5 p.m. | Free Over a dozen hip-hop and soul acts will converge on eight venues in Grand Center for a night of free music. Urban Chestnut will be on hand with free samples of beer as well. An all-inclusive affair, for the low price of nothing at all.

Last to Show First to Go Farewell Show Friday, August 14 The Bootleg 9 p.m. | $10 By Allison Babka Last to Show First to Go defies categorization. The band expertly shifts from folk to alt-country to rock during any concert, on any album and even during any song. It's a lot of ground to cover, but singer/guitarist Bredon Jones' lyrics about life's messes tie everything together. Under the layers of guitar, cello, percussion, harmonica and trumpet, Jones' words offer sadness, cautionary tales and doubt without being dreary. It's transcontinental, thoughtful road-trip stuff, and at its heart, it gets at what "Americana" means after all. See the band off for one last time at this show before it breaks up forever.

Floating City Reunion show Friday, August 14 and Saturday, August 15 Foam Coffee & Beer 8 p.m. | $5 By Melinda Cooper There was plenty of alt-country, screamo, emo, punk, etc., happening in St. Louis in the early aughts, and even a few years prior. Too much, maybe -- the scene was ripe with want for something different. The Floating City rose to the occasion. Defunct for a few years now, the band will reunite on both August 14 and 15 to perform with a various combinations of members throughout the evening.

Authority Zero Saturday, August 15 Fubar 8 p.m. | $13-$15 By Bob McMahon from this show review Authority Zero brought serious chops to the proceedings as drummer Chris Bartholomew and bassist Jeremy Wood shifted effortlessly between full-throttle, double bass-drum workout punk to up-tempo ska, sometimes mid-song. Brandon Landelius kept pace with solid guitar work and took advantage of two small opportunities to cut loose with skillful, head-banging solos. But singer Jason DeVore was the star of the night, running around stage spitting growly but tuneful lyrics at a superhuman rate (Twista would be impressed at how fast he sings). The band kept the tempo and energy kicking throughout the night, wowing a roaring pit with screaming renditions of such favorites as "A Passage In Time" and "Retreat," but the highlight of the set came in the slower desert skank of "One More Minute."

Music Record Shop One Year Anniversary Saturday, August 15 Music Record Shop 5 p.m. | Free Help St. Louis' newest brick-and-mortar record store ring in its one-year birthday with special DJ sets from the store's clerks. While you are there, why not drop some money on some new music? The event's free beer, food and wine only sweeten the pot.

The Conformists w/ Shitstorm, Desperate Measures (members of Demon Lover and Kisser) Saturday, August 15 Schlafly Tap Room 9 p.m. | Free That lineup should speak for itself, but just in case you need another excuse, this show will help to raise funds for this year's sequel to Pu Fest, aptly named Tu Fest. Don't be stingy with those donations!

Glow Party at Sk8 Liborius w/ 18andCounting, Nappy DJ Needles, Quasar Camp, Hylidae Saturday, August 15 Sk8 Liborious 9 p.m. | Free Live music, DJs, live painting and installation art, all in a gigantic, beautiful church that has been converted into a playground for skateboarders. This may well be the party of the summer -- don't miss out.

Bad Taste w/ Lumpy & the Dumpers, Shitstorm, Cardiac Arrest Sunday, August 16 Foam Coffee & Beer 5 p.m. | $5 What a lineup! Carbondale, Illinois' Bad Taste plays straightforward punk that brings to mind classic Black Flag records, but with a subtle rock twist to keep things interesting. Joining the group will be Lumpy & the Dumpers (St. Louis' premier purveyors of slime-covered punk), Shitstorm (local garage-rock highly suitable for ass-shaking and head-nodding) and Cardiac Arrest (St. Louis' long-running hardcore band -- watch for a sick cover of Poison Idea's "Just to Get Away"), making for a rock-solid affair sure to leave you sweaty and satisfied. Frequent attendees of punk shows are well aware of the phenomenon that is "punk time," which is defined as "when the show starts a full two hours after advertised." This one is an early show on a tight schedule, though. Arrive on time or miss out.

Hillary Fitz Music EP Release Show Sunday, August 16 Blueberry Hill 8 p.m. | $8-$10 Blues/folk singer Hillary Fitz releases her new EP at this show, which she recorded before leaving the states to work in the jungles of Panama. Neat! In any case, head to this link right here for a preview.