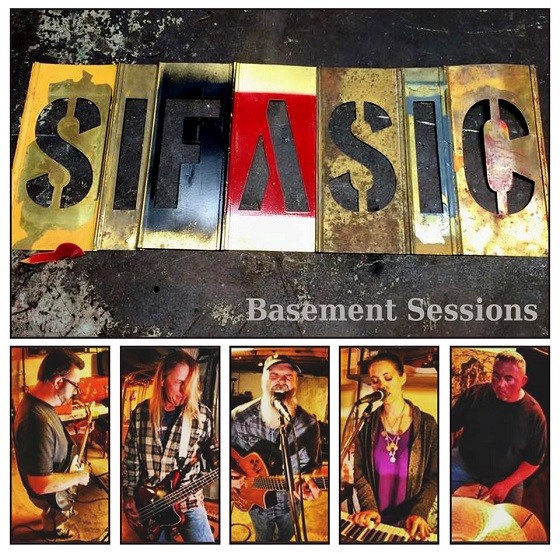 Joshua J. Grassle has a growling, gristley voice that's well-suited for the low rumbles of melodic hardcore or the soul-scrapings of heavy metal. He's proved as much over the years with a host of St. Louis-by-way-of-Alton, Illinois, bands such as Foster Pilot and Elbow Through Hammer.

His newest group attempts to soften some of the edges of his previous acts, though his vocal delivery has lost none of its heaviness. SIFASIC, a clunky acronym for "sometimes it's foggy, and sometimes it's clear," had its genesis in Grassle's musical partnership with vocalist and pianist Jamie Marie George, and the two have collaborated in a few projects prior to this one. Alongside guitarist Sean Stone, bassist Rich White and drummer Paul Sanders, the two singers lock into set roles -- his gruff, hers honeyed -- for this grayscale hard-rock EP.

As the title suggests, Basement Sessions collects five home recordings as a way of introducing the group. The finished product is better than a demo tape and less convincing as a statement of purpose, and the suitably rough production is a good fit for a band with little love for polish. Most of these songs are minor-key and downcast, mining the strip of land between modern radio rock and bleak outlaw country, if more in mood than in genre signifiers.

Opening track "Everything Changes" gives the clearest picture of what SIFASIC is after: A rangy lead guitar cuts a path early in the song, and George's heavy piano chords add a different kind of gravity than that of the rhythm section. It's also the best example of what Grassle and George can accomplish as a duo; her lines float above his with a plaintive sway, as if the characters in the song are speaking the same lines but still failing to communicate. That's a useful tension that the best duet singers have relied upon, but too often the singers perform in tandem at a set interval that doesn't explore the space of the songs. These feel like Grassle's performances with George's harmonies tacked on.

"Right" shows a little more buoyancy thanks to some syncopated guitar interplay and plucky piano parts, and set closer "On and On" shows the band at its most muscular. As an introductory recording, Basement Sessions shows that SIFASIC can be a fine hard-rock band, but the group will have to leave room for nuance if it wants to create a new space for its sound.