The Best Concerts in St. Louis This Week, August 3 to 9 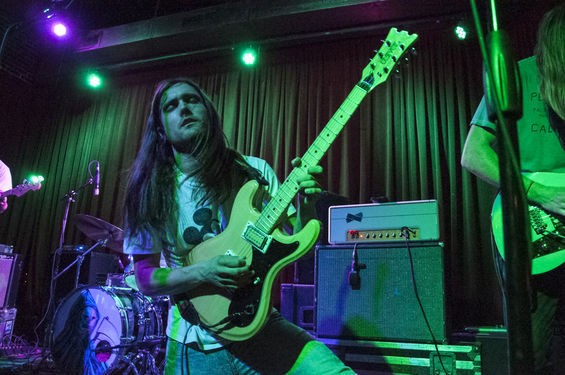 With the Open Highway Music Festival (featuring Bob Schneider, Jay Farrar and Diarrhea Planet, among others), Chicago punk legends Sin Orden and Rage Against the Machine's Tom Morello, several small to mid-range venues are sure to bust at the seams with maximum capacity. The theme of this week is punctuality, because not arriving on time means watching from the outside. The fashionably late will fashionably miss out.

Madisen Ward and the Mama Bear Monday, August 3 Old Rock House 8 p.m. | $8-$10 By Roy Kasten Cast your mind back two years: Madisen Ward and the Mama Bear played to a handful of folks on the top of the City Museum at KDHX's annual Midwest Mayhem bash. Perhaps the mother and son duo knew what was to come: a record deal with Glassnote, major festival slots and world tours. But they didn't play like it, and they still don't. Steeped in gospel and hillbilly music, the Kansas City-area musicians also love contemporary folk of the Simon and Garfunkel school. Together they unwind serpentine stories full of subtle details and back them with just enough stomp, strum and call-and-response to keep the front-porch feeling alive -- no matter how big the stage gets.

Sin Orden w/ Nos Bos, Larz Tuesday, August 4 Foam Coffee & Beer 10 p.m. | $7 By Joseph Hess Spanish for "disorderly," Sin Orden must have some penchant for irony because the band's sound is anything but. Armed with stringent riffing, the Chicago quintet tightly winds its songs around strict beats within a full dynamic range. Drums cut through thanks to generally high tuning, which helps to guide the dueling rush of dissonant chords and deep, punchy bass. Damn near twenty years of re-working what some consider a wholesale genre for dropouts shows that there's still much to be said, and done, in hardcore music today.

Open Highway Music Festival Day One: Bob Schneider w/ Sam Gregg Wednesday, August 5 Off Broadway 8 p.m. | $20-$35 By Roy Kasten The brainchild of musician and promoter John Henry, the Open Highway Music Festival celebrates its fifth year with the kind of lineup that should make LouFest, if not Sasquatch, envious. Two major songwriters, Jay Farrar and Ryan Bingham, join Bob Schneider (who kicks off the five-night event on August 5), Ha Ha Tonka, Diarrhea Planet and Craig Finn of the Hold Steady. It's been decades since Farrar has played Off Broadway, once a stomping ground for Uncle Tupelo, and Bingham ordinarily plays rooms three times the size of this club, so that should be incentive enough. But with not-quite-local heroes Ha Ha Tonka (the band hails from Springfield, Missouri) and Finn, who will be debuting new material from his second solo album Faith in the Future, OHMF should tempt anyone who wants a festival experience without the increasingly corporate mega-festival bullshit.

Open Highway Music Festival Day Two: Diarrhea Planet w/ Bruiser Queen, Brother Lee and the Jackals Thursday, August 6 Off Broadway $10-$12 By Michael Dauphin From the RFT Music archives: Buried under the squeals of distortion and the nagging riffs are infectious melodies that are harder to shake than the condition of which the band is named after. It's loud, it's sloppy, it's heavy and it's damn fun. And just listening to DP it's clear that nobody is having more fun than the members of band itself.

Follow through for more concerts in and around St. Louis this weekend. FRIDAY, AUGUST 7

Cathedral Fever Final Show w/ Fister, Hell Night, Anodes Friday, August 7 Fubar 8 p.m. | $8 By Daniel Hill Three and a half years after forming, Cathedral Fever is calling it quits. While that might not seem like a very long time, it is actually a pretty typical lifespan for a hardcore band, and the St. Louis group managed to release a matching number of records during that period (one demo, two EPs and a split with Hell Night, amounting to three and a half releases according to our crack team of math buffs). That actually puts the group a little bit ahead of the curve, honestly. Bonus points are awarded for the fact that each of those efforts was really fucking good. Members of the darkened hardcore act ("dorkened," to hear them tell it) insist there is no bad blood or animosity behind the breakup, and that the group has simply run its course. Expect a good time shared by friends and fans alike, as well as sets from Fister, Anodes and the aforementioned Hell Night.

Ferguson Rocks w/ Tom Morello and the Freedom Fighter Orchestra, Boots Riley (of the Coup), the Outernational, Steffanie Christi'an, Jessica Care Moore Saturday, August 8 The Ready Room 8 p.m. | free By Daniel Hill One day before the one-year anniversary of the death of Ferguson teenager Michael Brown at the hands of then-Ferguson police officer Darren Wilson, the Ready Room will play host to a concert to raise awareness and benefit social activism. Organized by rapper/activist Talib Kweli's Action Support Committee, the free show will feature performances by many artists who are outspoken about social justice, including Rage Against the Machine's Tom Morello, Boots Riley of the Coup, Street Sweeper Social Club and more. While the event is free of charge, donations are encouraged.

Every Time I Die w/ Real Friends, Counterparts, Gnarwolves, Brigades, Gatherers Sunday, August 9 The Ready Room 5:30 p.m. | $19-$22 By Ryan Wasoba From the RFT Music archives: Since Every Time I Die originally stepped out of the metalcore herd by infusing its tracks with Dimebag Darrell fretwork, no description of the group seems to be complete without the use of Southern as an adjective. Through years of refinement, the Buffalo, New York, band is gradually shifting geography, its rock & roll hardcore recalling the '90s circle of San Diego bands that included Drive Like Jehu, Hot Snakes and Rocket From The Crypt. Today's spin-kick ninja kids don't particularly care about Jehu, but the further west ETID ventures, the fewer banjo intros to sit through before the breakdowns.