The 10 Best Concerts in St. Louis This Weekend: July 31 to August 2 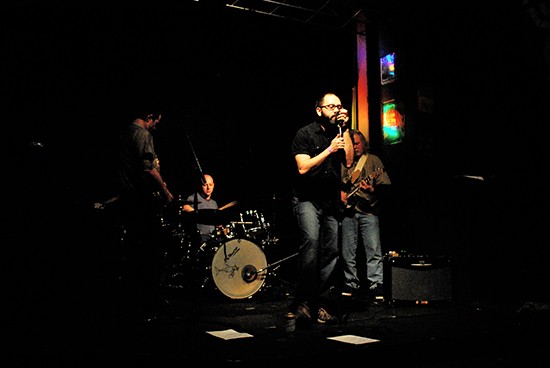 St. Louis is in full bloom. With four release shows via Shark Dad, Black Fast, Trancers and the Fuck Off and Dies, the floodgates are officially open. Clear your ears for a full punk blowout all weekend long at 2720: Acid Kat Fest III has 50 bands across two days, spanning the space between garage rock, hip-hop and experimental music. If you're going for a low-key affair, don't even bother looking here.

Armadillo (Last Show) w/ The Brainstems Friday, July 31 CBGB 10 p.m. | free Armadillo takes on post-punk with currency. The songs enjoy a forward momentum that thankfully doesn't rush along, allowing the melodies room to breathe. There's an inherent looseness going on amid a tight presentation -- a careful balance between order and chaos with fingertips resting on the self-destruct button, just in case. If anything, this show is an apt pregame to next weekend's Gang of Four show at the Old Rock House. And it's not just another gig for the Brainstems as the psychic rock heathens will say goodbye to their drummer and founding member, Kenny Hofmeister.

BRUXISM Vol. 10 w/ Trancers, Greg Farough Friday, July 31 Foam Coffee & Beer 9 p.m. | $5 Nathan Cook's bi-monthly series hits its tenth edition with beat-driven ambient waves from Trancers. Expect a more sensitive sound from Greg Farough, who works with low volume and extreme contrast to express spatial relationships. The third and final featured act of the night is to remain a secret until the show, but we know who it is -- and they won't disappoint.

Chicago w/ Earth, Wind & Fire Friday, July 31 Hollywood Casino Amphitheatre 7:30 p.m. | $74 Earth, Wind & Fire joins Chicago on what seems to be a yearly summer concert, but why anyone would want to keep visiting St. Louis in the deathly humid dog days of July and August spares all logic. Don't mistake tighter low tempos for a laid back sound -- this is a layered rock band with all the subtle play of a well-worn jazz group.

Pat Sajak Assassins w/ The Leads, Bagheera Friday, July 31 Schlafly Tap Room 9 p.m. | free Pat Sajak Assassins drag your poor Nintendo through the dirt, causing enough bumps and bruises to turn what would be video gamey cuts into bizarre psych-rock songs with endless synth. Think chiptune music played with real keys and strings, backed up by a drummer whose beats ebb with a liberal use of drum triggers.

Shark Dad Album Release Show w/ Bassamp and Dano, Uncle Erik's Basement Quartet Friday, July 31 The Heavy Anchor 9 p.m. | $7 Dad rock might not be a fair summation, but when the band in question has "dad" in the name and its singer does in fact father children, the term starts to carry weight. Shark Dad recently launched a crowdfunding campaign to help build a new, independent recording studio, Moon Jr. The album release on this night is the first of many fruits from that labor of love, ringing in a new low cost solution with low rent indie rock that never outstays its welcome.

Black Fast Album Release Show w/ Crimson Shadows, the Lion's Daughter, the Gorge Saturday, August 1 The Firebird 8 p.m. | $10 By Daniel Hill Prepare yourself, lowly mortal: The towering metal monolith that is Black Fast will unleash its latest effort, Terms of Surrender, on an unsuspecting public at this show. The band's first record since signing with eOne Music -- home of top-tier metal acts including High On Fire, Overkill and Crowbar -- should be expected to pack the same barbed-wire-wrapped punch as its previous releases, only with sleeker production. Blistering leads, impressive technicality and searing, scorched-earth vocals abound. R.I.P. to your poor neck muscles -- the level and severity of head-banging induced will likely keep your chiropractor flush with cash for the foreseeable future. No plebs allowed.

The Fuck Off and Dies Record Release Show w/ Braddock, Opposites Attack Saturday, August 1 The Demo 9 p.m. | $10 The Fuck Off and Dies might be best summed up as the leaner, sharper counterpart to Story of the Year, who we know to be the heavy emo crooners of the early aughts. History aside, the band takes its formula and filters everything out but the most taut of punk bits, proving its heavy roots in a city where hardcore is certainly scripture but not every nerd with a guitar is a scribe.

Kidding. Cannibalistic Humanoid Underground Dweller: The Band respects the source but still squeezes out a hook-laden mess of chords and smashed drumheads. Laid back but not so lackadaisical, the Bloomington band knows when to quit its quick songs, giving space between trashed riffs baked in utter fuzz. This is simple guitar bliss buried in a wall of static and hum -- one need only look to solid punk beats to guide the way.

Joell Ortiz & !llmind Sunday, August 2 The Demo 6:30 p.m. | $15 By Daniel Hill Though he has never really broken through in a mainstream way, Joell Ortiz has remained one of the most consistent and capable underground rappers since he got his start in 1998. Ortiz is a member of the hip-hop supergroup Slaughterhouse, signed to Eminem's Shady Records, and in the past has seen brief stints with Dr. Dre's Aftermath label, Interscope, and even an ill-fated near-deal with Jermaine Dupri's So So Def imprint. Skilled in the art of battle-rapping, Ortiz was one of the first to respond when Kendrick Lamar's "Control" verse shook the entire hip-hop world in the summer of 2013 -- it could even be argued that his verse eclipsed Lamar's effort. Joining Ortiz on this tour is producer !llmind -- the two recently collaborated on their album Human, released on July 17.