Omaha's See Through Dresses: Expect a "Very Engaging and Energetic" Show at the Firebird 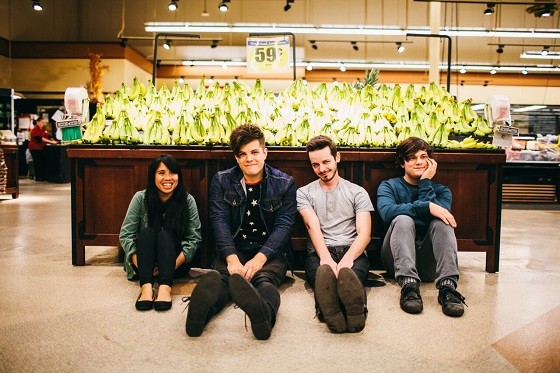 The closest thing to a real-life character from The Adventures of Pete and Pete may be See Through Dresses' Mathew Carroll.

Much like the Nickelodeon show that featured musicians as characters with kid-centric jobs, Carroll -- when not touring with his band -- finds himself behind the counter of Ted and Wally's Ice Cream in Omaha's Old Market District.

"I went to college and basically wasn't a musician for like two to three years, during which I was fairly miserable," Carroll says of his time at Creighton University. "Not because of the education,which I loved, but because of the omission of music from my life. I started playing in a couple different bands and suddenly realized, 'Oh yeah! I like this more than anything.' Now I work at an ice cream shop and play music all the time."

See Through Dresses, the band Carroll co-fronts with his longtime collaborator Sara Bertuldo, will be appearing at the Firebird on August 4 with Cymbals Eat Guitars, Lobby Boxer and Mariner. And much like Ted and Wally's menu, which features updated versions of traditional flavors (Irish Breakfast, Vegan Blueberry), See Through Dresses starts with a familiar dose of shoegaze and infuses a poppier spin -- distinguished by the interplay between Carroll and Bertuldo's vocals.

The two began playing together in 2008, and soon formed the band Honey and Darling. "It wasn't very good," Bertuldo says of their first group. The duo would then play together in Conduits, with whom they would meet Cymbals Eat Guitars while both bands toured with Cursive in 2012.

That same year, Carroll and Bertuldo caught drummer Nate Van Fleet performing at a Omaha bar called the Sydney. Soon after, See Through Dresses was born.

"He had the most beautiful head of hair -- and still does," Carroll says of Van Fleet. "So we started rehearsing together regularly and after a few weeks we had a decent batch of songs prepared. Shortly after we did the first album."

Brad Smith, owner of Omaha record store Almost Music, was an early supporter of the band. A friend of original bassist Robert Little, Smith went to see the group to support Little and ended up falling in love.

"They write well-crafted songs -- that's the primary thing for me," Smith says. "You can tell they put thought and care into the structure and dynamics of their songs. I also like the dual male/female vocals."

Before a slate of tour dates last summer, Little left the band, prompting Carroll and Bertuldo to turn to the Internet to find his replacement -- South Dakota transplant Alex Kirts.

"We were worried he might be a creep at first because of the Internet thing," Carroll says, "but he turned out to be the sweetest fella."

Bertuldo adds that Kirts "brought beer when he came to audition, which won him a lot of bonus points."

With Kirts taking over the low end, the band has completed a new EP -- End of Days -- that will be available this fall and is currently working on its second full-length album. Carroll and Bertuldo work on song ideas individually before meeting up to discuss what works and presenting those ideas to the rest of the band. For Carroll, the landscape of his home state of Nebraska often influences his writing.

"The landscape of Nebraska as a whole often inspires me in both healthy and unhealthy ways," he says. "Anyone who has driven across this state has probably experienced some psychological stuff. For me there are strong feelings of isolation, paranoia or the feeling you'll never get to the horizon in the distance because it just looks too far and you can see everything. There's also the good side of that too, like staring out over a stretch of plains at night when everything is so still and there's all these distant shapes -- some familiar and some not -- and when something in your field of vision changes or moves it looks super dramatic -- like meteors and stuff. Somehow that's comforting to me."

Much like the diverse emotions a drive across Nebraska can inspire, the music scene from which the band come from also encompasses a wide spectrum of sound. Though best known for being the home of Saddle Creek Records -- a label that features Bright Eyes and the aforementioned Cursive, among others -- Omaha has also produced 311 and Mannheim Steamroller, and a spate of what Smith describes as "lesser-known but legendary local artists" including Simon Joyner, who Smith credits as "putting out quality records for over twenty years."

"Omaha has always had a diverse underground music scene though, and still does," Smith says. "We have thriving bands in almost every genre: punk, hardcore, metal, singer/songwriter, hip-hop, alt country, etc. It's a pretty tight-knit, friendly community."

While Bertuldo, who was born in Missouri and lived in California before settling in Omaha in the early '90s, considers leaving the city, she also "plan[s] on touring a lot. Which is almost like living in different places every day."

And those who catch See Though Dresses should, according to Smith, expect a "very engaging and energetic [show]. Sara rocks out."