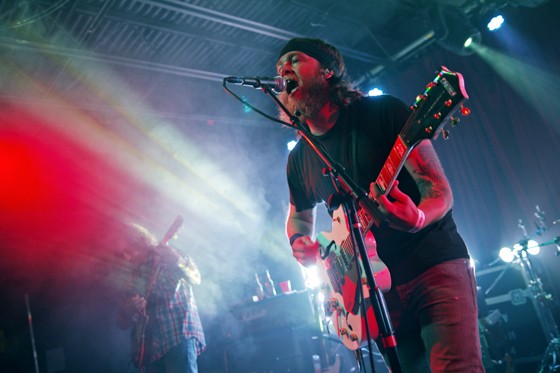 "And though you fight to stay alive/your body starts to shiver/for no mere mortal can resist/the evil of the thriller."

Welcome to An Under Cover Weekend, an annual music festival where local bands come together to play 30-minute tributes to music icons from across the ages.

"When we did Michael Jackson it was, second to my wedding, the best night of my life," Goldstein says. "It was just so cool. It's so much fun to see the crowd interact with you. It feels like you're actually time traveling almost, like you're all kind of going back in time and everyone is singing the lyrics with you."

In late September, Goldstein will return to An Under Cover Weekend for her third year, this time playing alongside her bandmates from the Resounding. The festival will be celebrating its ninth year with a fifteen-band lineup, featuring the likes of Life Without, Various Hands and Blackwater '64.

"What we really are trying to do is allow people to find their new favorite local band by identifying with who they pay tribute to," explains Michael Tomko, who organizes the festival alongside Firebird owner Mike Cracchiolo. "Its so uplifting to hear people screaming at the top of their lungs for one of my friends in a local band. I live for that. That's what keeps me doing this every year."

This year, for the first time since 2010, the festival is expanding from two nights to three. The show will get started on Friday, September 25, at the Firebird and run through Sunday night. While attendees can expect mostly radio-friendly covers on Friday and Saturday, Tomko says that the third night will feature slightly edgier sets and a more contemporary style.

"A lot of thought goes into carefully putting the pieces in the right spot," Tomko says. "We really try to put the right bands in front of the right people. It may seem like a frivolous worry, but we want people to walk away with an unbeatable experience -- something that they're not going to get anywhere else."

Tomko explains that he and the other organizers had not initially intended to add a third night, but this year's submissions were so strong that he couldn't bear to write five more rejection letters.

"I think that the strength of the additional five warranted a third night, and we felt they could carry their own on a Sunday," he says. "These guys were convincing that what they were going to do is something great. We figured it was the time to give it a shot."

Every year, An Under Cover Weekend receives somewhere between 30 and 40 submissions from bands interested in playing the festival. In addition to picking a musician to which to pay tribute, each prospective band is asked to outline some of the more theatrical elements it plans to incorporate into the set. Tomko says that narrowing the lineup down to fifteen bands can be grueling, and the ones that get picked are not necessarily the most technically gifted musicians.

"In our experience, it's not always the most talented bands that have done the best sets," Tomko explains. "A lot of it is about having the drive to find the accuracies, to find the things that will make it feel genuine to the crowd. A lot of it comes from the attitude or the theatrics."

There are a handful of sets that Tomko says he will never forget. He remembers Fattback covering Huey Lewis & the News, being beckoned onto the stage with a deafening chant of "Huey, Huey, Huey."

Then there was the time that Fractured Army covered the Eurythmics in 2009. Jessica Spitzer, who sings for Fractured Army, had spent the hours leading up to the set in a wig. Then, during the first song of their set, Spitzer ripped off the wig to reveal a bleach-blonde, Annie Lennox-style faux hawk.

Find more information, including this year's lineup, at undercoverweekend.com.