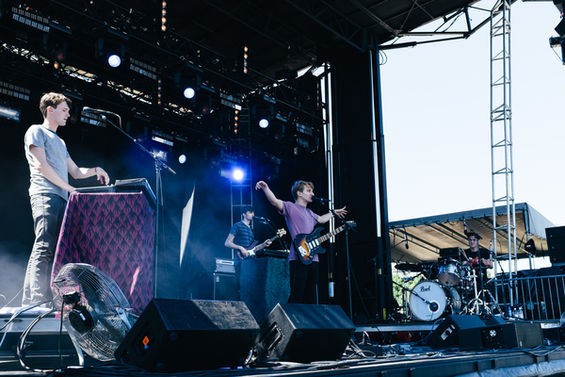 Glass Animals had a standout show at last year's LouFest, and tonight the band occupies the outdoor stage at Old Rock House for a much more intimate gig. Get your brains drunk on pop-punk at CBGB with Color TV or help support the upcoming Acid Kat Festival with a fundraiser at Foam. One could argue that every show is technically for a good cause (art, general enjoyment, etc.) but some are more than others. Kid Rock might be hard to justify, but the price is right at the low cost of twenty bucks.

Acid Kat Fest 3 Heavy Fundraiser w/ Path of Might, ThorHammer, Planet Eater, Heavy Horse Friday, July 24 Foam Coffee & Beer 10 p.m. | $3 By Daniel Hill Now entering its third year, Acid Kat Fest is quickly becoming one of the best festivals in town for those willing to scratch a little beneath the surface. Freaks and weirdos from St. Louis and parts beyond gather for a night of music that ranges from the poppy to the avant-garde to the hardcore, touching on many sounds that fall in between. This year's fest will take place next week, on August 1 -- think of this show as a primer. All proceeds will go toward making the festival itself possible.

Glass Animals Friday, July 24 Old Rock House 8 p.m. | $22-$25 A standout of LouFest 2014, Glass Animals would have stolen the show if not for acts like Outkast and Matt and Kim who shared top billing. After last year's Zaba, the U.K. outfit has enjoyed steady time in the limelight. Consider this video for "Gooey," wherein one old man drools into a younger guy's ear, and you'll question the band's mass appeal, despite being full of warm indie pop rock.

The Fog Lights Album Release w/ Letter to Memphis, Emily Wallace Saturday, July 25 Blueberry Hill 9 p.m. | $8 Years ago, Justin Johnson started Pretty Little Empire, but that band become much louder and busier than its initial vision. The Fog Lights represents he and Jim Peters' songwriting in pure, undiluted form. The band is stripped down but never feels bare, owing to its penchant for making simple sounds feel greater than the sum of its parts.

See also: The Fog Lights Pull From the Past to Illuminate New Sounds on Manhassett

This City of Takers w/ Kadu Flyer, Giants in the Sky Saturday, July 25 Schlafly Tap Room 9 p.m. | free All three bands on the bill share shoegaze leanings, but the general flavors of rock couldn't be more varied. Giants in the Sky takes a more pensive approach, choosing to build before a perpetual pay-off of heavy riffs and lumbering, hard-hitting drums. Darkly tinged, This City of Takers injects a gloomy vibe, counting on subtle punk leanings to push rawer rock songs.

Kid Rock w/ Foreigner Saturday, July 25 Hollywood Casino Amphitheatre 6 p.m. | $20 After activists called for Kid Rock to stop waving that damn Confederate flag, the rap-rocker basically told everyone to "kiss my ass," and the public stood corrected. Turns out he wasn't exactly doing what many had accused him of but that response did nothing to help public perception. Diehards already know what to expect, but this event is especially open to potential fans and ironic hipsters who just want to go people watch. Ticket prices are $20 flat with a tiered release system, which discourages scalpers while keeping prices low. Kid Rock can be classy when it comes to one thing: money.

Valkyrie w/ Van Buren Saturday, July 25 The Firebird 8 p.m. | $10 Members of Baroness, Pentagram and Wretched form a super group of gripping doom metal in Valkyrie, a band first conceived in 2002 as a stoner rock power trio. Much has changed in thirteen years, as the group has carved out a very dark and distinct set of songs, finally bearing its jagged teeth with this year's Shadows, released on Relapse Records.

Baby Birds Don't Drink Milk w/ Wamhoda, Tubby Tom, Beauty Pageant Sunday, July 26 Foam Coffee & Beer 9 p.m. | $5 Baby Birds Don't Drink Milk stood out in the mid-aughts amid waves of Animal Collective fans who started ill-advised bands. Its loosely fit songs were rife with warbling riffs and buoyant beats, bending to the will of melodic layers. Today's version has only gotten weirder, with an even more amorphous sound and a back drop of blissful noise.

Mark Dew Sunday, July 26 Hideaway Restaurant & Lounge 7:30 p.m. | free I've heard the Hideaway described as some hipster hangout, but what does that say about Mark Dew? He holds down the south city space by tickling the keys, playing requests and making damn sure that tiny dance floor sees a sole or two. Right now he's there three times a week, but Sunday night is the safest bet for a low key crowd and plenty of space to actively participate.