General Lee Shows Up to Cancer Benefit for Ken McCray 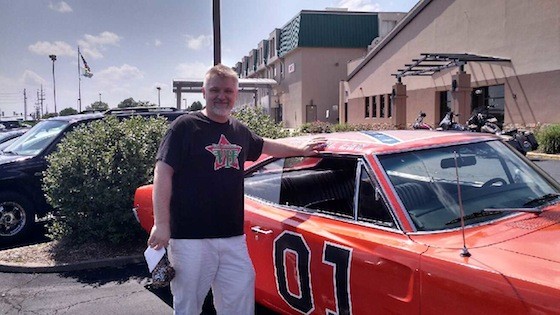 Last month, we ran a feature on Ken McCray's ongoing fight against Stage IV colon cancer, as well as the benefit concert that was being planned to help pay off some of his bills. The months of planning and effort from McCray's friends and family seem to have paid off. Last weekend, the St. Louis music community rallied to Mile 277 to show their support for the Superjam and Tilts drummer.

McCray estimates that there were almost 1,000 people coming and going throughout the day, including old friends and complete strangers. KSHE's Sweet Meat showed up for the gig, as did some of St. Louis's best cover bands including Joe Dirt, Trixie Delight, Kung Fu Panda and of course Superjam. There were surprise guests too -- some of which even caught McCray off guard.

"It was truly amazing," McCray adds. "The only thing I can put into words is I wish that everybody could experience that kind of day at least once in their life. I honestly can't even put into words how amazing it was. All those people who were there for me -- for one day I got to be the center of attention, the rock star, the real rock star of the day."

The benefit truly brought out the best of the St. Louis music community, but unfortunately, it also brought out the worst. At some point in the afternoon, two donated watches that were set to be auctioned off, as well as a pair of Golf Galaxy gift certificates went missing, and are believed to have been stolen. Although Mile 277 has security camera footage of the event, there were no cameras fixed on these particular items, and the venue owner, Mike Rostek, says the chances of recovering them are slim.

One of the venue employees called the police as soon as the items went missing. Not only did an officer arrive within minutes, but Rostek says the officer ended up sticking around for the rest of the show.

Neither Rostek nor McCray are letting this theft spoil their memories of an otherwise perfect day. In fact, Rostek is already making plans to host more benefits at Mile 277, and at his other venue in Ballpark Village.

"Everything else went fantastic," Rostek says. "I would hate to say it couldn't have gone any better, because you can always make an improvement on a show like this, but the morale, the atmosphere, the money we raised -- everything was perfect. The functionality inside the bar was great. Everybody there was there for the right reasons."

While McCray is incredibly appreciative for all of the donations, he feels even more thankful for all of the love and support that he received from his friends, family and fans throughout the day -- and no thief can ever steal that.

"I almost kind of feel like, with my condition, having cancer, we all kind of know how that ends," he continues. "I'm just happy that I got this kind of celebration, where I actually got to enjoy it instead of some kind of memorial or tribute afterwards. That was the coolest thing for me. Having that day."