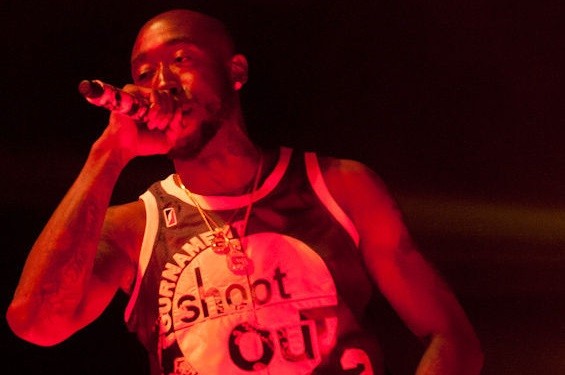 "The will to win. It comes out of Gary, Indiana. I was supposed to lose, but I didn't," Freddie Gibbs says over the phone from Los Angeles. "My story comes from a real victorious place in my heart. Don't nobody want nothing in Gary, so you gotta want for yourself."

The 33-year-old Indiana native is indeed one of few rappers to come from the state. "You talking to the music scene," he laughs. Since 2003, Gibbs has released a deluge of mixtapes, EPs and studio albums. His next full-length, Lifestyles of the Insane, is slated for a late-summer release.

The video for his most recent offering, "Pronto," sees Gibbs rapping while lying in a tub of 200 snakes (yes, he did get bit). The imagery is provocative, and speaks to his desire to use hip-hop as a path to success. "Got the new edition, rap game then the dope game," he spits. In other words, he has moved on from his previous drug-selling endeavors to settle into a full-time rap career.

But that life will always be a part of him.

"Most of the rappers are gang members or drug dealers," he adds. "Going to the studio in Gary was like just going to a drug lab."

Gibbs turned to selling drugs after being kicked out of Ball State University. Dealing was convenient at first, but he knew he was capable of something better.

"I was sitting on my phone, selling crack, doing the bullshit that I knew how to do," he says. "I wasn't using my full mental capacity that God gave me. My little brother is a doctor and my sister is a scientist. My mom is a good mother. I had the intellect -- I was just in the streets doing dumb shit."

As he picked up rapping, he continued to hustle to finance his music. His career went through a number of ups and downs in the beginning -- his contract was dropped from Interscope in 2006, and in 2012 he left Young Jeezy's CTE label. Gibbs eventually created his own label, ESGN -- Evil Seeds Grow Naturally, which is also the title of his first studio album. The name is an ode to his love of sports (he watches a lot of ESPN), and it's dedicated to the streets that raised him -- blue-collar working families, the oppressed and those who have had to struggle.

"It's like, look what America did to us, with drugs and slaves and all of that, and like we still grow into something beautiful," he says. "Like Tupac [Shakur] said, 'The Rose That Grew from Concrete.'"

After ESGN, Gibbs released the Madlib-produced album Piñata, which sees the rapper in rare form. The 2014 release brought his music to a much wider audience, and was celebrated by critics and fans alike. The title is again rooted in dealing: He was trying to think of a unique way to transport drugs, when one night he dreamt of a piñata. After actually moving drugs in one, he made an album about it.

"[Authenticity's] always been an important thing to me as well. I think that can shine through. I feel like rapping about some fake shit ain't going to get you nowhere," he says. "It don't feel right rapping about it. I'm not going to rap about having one hundred bricks when I only have ten.

"I only rap about the things I've experienced," he continues. "It just so happens that those things are street things. If I was the guy that went to college, finished college, started rapping, I'd rap about that. It may sound dark and all that, my spirit, but I'm in a real good space, musically and mentally and financially. I gotta thank God for that."

Gibbs' honesty ultimately makes him a more multidimensional rapper. He banks much of his career on being real, which is the spirit of ESGN. His ability to work with Madlib -- which he says was "like trying to piece together a puzzle" -- is a testament to his adaptability, and it was a boost to his artistry. Madlib helped Gibbs become a sharper and more genuine lyricist.

Now that Gibbs is earning money from rap, he wants to start calling the shots at ESGN. Gibbs has financed his career with zero backing from a major label and no radio singles. He's garnered endorsements from companies such as Adidas all on his own. And he considers it just another part of his growth.

"I feel like if you don't evolve as an artist and do the same thing, it's nothing [interesting] about you," he says. "[Rap is] art -- it's like cooking crack. The clean gonna rise to the top, and the bullshit gonna float away."