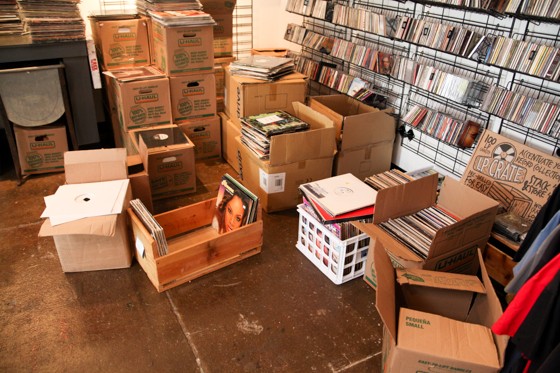 Late last week, Mark Carter, owner of the Music Record Shop in the Grove, received the kind of phone call that record collectors dream of.

It came from a woman in south St. Louis county, who years earlier had inherited a massive collection of vinyl from a family member who had been a DJ. The woman was preparing to move, but before she could, she had to find a home for the thousands of records in her garage.

"She didn't have any way of dealing with [the collection] or moving it, or knowing what to do with it," Carter says of the sale. "The family wanted to make sure it went to a place where people would appreciate it. They didn't want to give it away to Goodwill and they didn't have time to go through and sell it on a website auction place. They wanted to keep it local, so they got a hold of me."

So on Thursday afternoon, Carter and some of his employees drove out to south county to take a look. What they found blew their minds. Inside the garage were somewhere between five and six thousand records, stacked into tall piles on the floor.

It would have taken hours to sift through all of them, but it took less than thirty minutes for Carter and his team to realize this was a deal they couldn't pass up. Most of the albums were in pristine condition; many were still sealed in their original packaging.

Once the guys told me that this was quality stuff and that the vinyl was in good condition, I knew we could sell it." Carter says.

On Tuesday morning, Carl Daniels, one of the employees who had accompanied Carter on the sale, began the long process of examining, cleaning and pricing each of the new records. While the other employees manned the counter and assisted customers, Daniels picked through the dozens of boxes stacked in the back of the shop and underneath the tables. 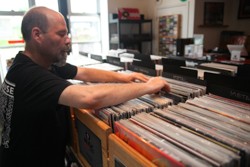 It turned out to be a gold mine," Daniels says. "Whenever you buy a collection this big you never know what you're going to get. You might end up with a few gems and then the rest is junk, or you might stumble upon something like this, where you're just amazed by all of the great stuff."

Daniels predicts that it will take three or four weeks for him to price the entire collection. Among the most exciting finds so far have been a sealed copy of Nellyville and an original four-record set from 2Pac. He has found records from Outkast, Rihanna, Run DMC, Kanye West, the Black Eyed Peas and many more. Although most of the collection seems to consist of hip-hop and rap albums, Daniels has also found a number of jazz records, including cuts from Dave Brubeck and Miles Davis.

Daniels isn't the only one carefully picking through the new collection either. Customers have already flooded to the store for first dibs, setting aside their favorite picks in brown paper bags for Daniels to price.

"It's just been mad since we got it," Daniels says. "The bags say it all. We're already having feeding frenzies where people are coming in and snapping things up like that. I'll come in tomorrow and will probably have more bags waiting for me. It's pretty maddening, but at the same time its kind of a rush too."