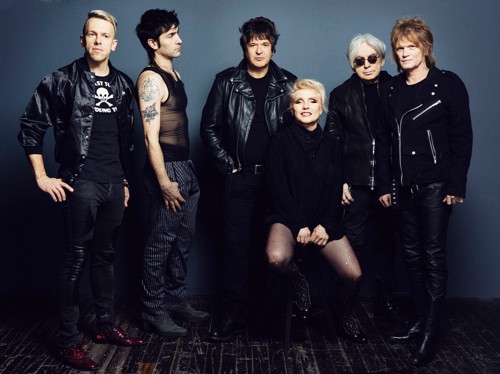 "What I tell friends now, or photographers: Just take pictures of your friends, because you never know what's going to happen," he says.

It's fitting that the Brooklyn native and icon of the CBGB scene is speaking to us about his body of work while walking the noisy streets of New York. As the guitarist for Blondie, Stein is often credited with bringing a fresh take to the city's burgeoning '70s punk scene. His musical instincts propelled the band well past its hybrid new-wave beginnings, and together the group explored elements of rap, disco, reggae and even saccharine girl-group sounds. The result was a genre-busting mixture of oddly seductive, delightfully bratty and distinctly catchy pop songs that still defy classification.

Stein does more than one thing, too. Most recently he has received high praise for his photography book, Negative: Me, Blondie, and the Advent of Punk. Released late last year, Negative shows how Stein's keen eye, coupled with unfettered access, made him one of the most celebrated and consistently reliable custodians of the era. The book contains hundreds of photos that archive the scene and people Stein encountered, focusing heavily on the undeniably photogenic Debbie Harry -- singer for Blondie and Stein's then-girlfriend.

The son of painter mother and a "frustrated writer" father, Stein describes his parents as "very supportive."

"It was kind of a lower-middle-class artistic upbringing," he says. "They got me my first guitar when I was twelve, and that was it."

It's been more than 40 years since CBGB opened and almost nine years since it closed. The Lower East Side has been scrubbed clean and Stein's hair is now Andy Warhol silver, but the man retains the same spongelike attributes that helped to make him a world-famous musician. Though the 65-year-old admits to spending "too much time sitting around and watching TV" (Game of Thrones is a favorite), he still finds plenty of time to explore new projects. He claims that his creative drive comes in spurts, but it seems that something inside of him is always taking notes for future artistic purposes.

Stein credits his constant curiosity and energy to his young daughters.

"I have the same inner conflicts as everybody else," he says. "I have to force myself to get motivated and move forward. I have two little kids now -- it's a whole different thing dealing with those guys. They definitely keep me in a younger frame of mind because I have to deal with them physically all the time."

He keeps up with newer trends, too.

"I really like Instagram. I deal with that a lot, and there is a lot of amazing photography on there," he says. "That's always inspiring. A lot of street photography. And it's really coming up now with the ease of taking sneaky pictures of people. Everybody wanders around staring at their phones and taking pictures of people at the same time."

While he concedes he isn't as active hunting for new music as he is with photography -- "It's just too much shit to plow through. It's kind of overwhelming to go out seeking stuff," he explains -- Stein has found a new obsession in today's Latin music, including reggaeton, cumbia and Latin electronica. He confesses that his Spanish is pretty lousy but says that he responds to "the musicality of it. The melodies and stuff. It's beautiful. Reggaeton is really hard-edged -- it's a great combination of the hard-edged dance music with these beautiful melodies."

Stein rejects his generation's tradition of writing off all modern music.