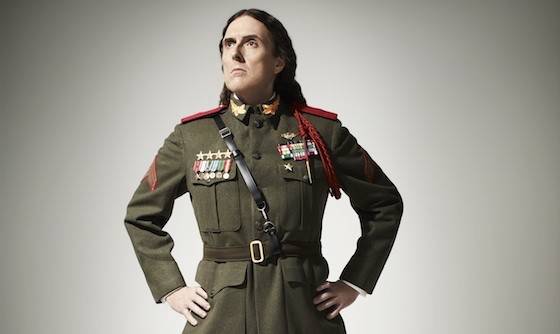 The 2015 RFT Music Showcase has long passed but local, grass-fed fests are in steady supply with this weekend's S.L.U.M. Fest 2015. While the brains behind Acid Kat zine will bring their own two-day, three-stage blowout later this summer, help fund the event by stopping by its combination rummage sale/concert at Foam on Saturday. If the wallet is looking thin, consider free shows at the Tavern of Fine Arts and Schlafly Tap Room. Or just drop everything and head to Weird Al.

The Harlequins w/ Shitstorm, Boreal Hills, Big Blonde Friday, June 26 Foam Coffee & Beer 9 p.m. | $5 The Harlequins make a dense, scratchy sound with time-warped garage rock that could be mistaken for Bay Area psychedelia. But being landlocked in southern Ohio brings its own set of perks. This crew tends to drag its strings through the muddy rivers of the Midwest, applying just enough sludge to otherwise poppy riffs. After all, rock & roll is supposed to be downright messy.

Soliloquy II w/ Henry Claude, Alex Cunningham, Tracy Andreotti, Fred Tompkins, Dave Stone, Greg Mills Friday, June 26 Tavern of Fine Arts 8 p.m. | free At the corner of jazz and noise sits the Tavern of Fine Arts, a tiny cubbyhole tucked away behind the squalor of sound art. If "avant-garde" is little more than a fancy hyphenated word to you, consider this night a guide to the world of free-improvisation. Six of St. Louis' most consistent and engaging players will perform short solo sets in succession -- for free, no less. This means no fatigue from hearing the same set of sounds for hours on end. A free-jazz sample platter, if you will.

Someone Still Loves You Boris Yeltsin Friday, June 26 Off Broadway 9 p.m. | $10 RFT contributing writer and all-around local funnyman Jeremy Essig just interviewed Someone Still Loves You Boris Yeltsin on the band's new direction, including its penchant for the buzz and fuzz of garage rock. Hop on over to that article now and see tonight's show with a fresh perspective.

Acid Kat Fest III Fundraiser w/ Superfun Yeah Yeah Rocketship, Tubby Tom, Mother Meat, Mr. Ben, Shitstorm, Path of Might Saturday, June 27 Foam Coffee & Beer Noon | $3 Few do it like the Acid Kat crew. What started as a punk zine backed up by a handful of bands via North County has become its own pocket scene within the city, drawing in buzzing pop and punk bands to small venues throughout Cherokee Street. You could wait for Pitchfork's end of year top-whatever lists, or you could go see those same bands -- before they make waves -- for $5 or less. This show is a midday affair that offers six acts to help raise funds for Acid Kat Fest proper, taking place at 2720 later this summer.

Beth Bombara Album Release Show w/ Loot Rock Gang, the River Kittens Saturday, June 27 Off Broadway 7:30 p.m. | $10 Apparently, Beth Bombara needs no introduction. In addition to being on the cover of Eleven Magazine, the folk firecracker just won the RFT Music Award for Americana. That's not a coincidence; it's the universe's way of telling everyone to go check her out. Besides being backed up by her full band, Beth Bombara will be joined by local openers and longtime friends Loot Rock Gang and the River Kittens.

Mates of State w/ Hey Marseilles, Good Graeff Saturday, June 27 The Firebird 8 p.m. | $18-$20 To many, Mates of State built that bridge of indie rock and pop that so many bands carelessly cross. Its 2015 release Greats shows that greatest hits albums aren't a product of the past, as this record celebrates the seminal duo's career with a suitable bookend. But don't expect anymore full length records from here on -- Mates of State plans to release its songs in bite-sized chunks, ultimately bending to the will of the internet-age.

Party Knüllers with Fred Lonberg-Holm w/ Ståle Liavik Solberg, Vernacular String Trio, DJ Ghost Ice Saturday, June 27 Schlafly Tap Room 9 p.m. | free Yet another product of coordinator Jeremy Kannapell, this event offers an alternative take on jazz idioms with a prominent focus on stringed instruments. In keeping with its namesake, the Vernacular String Trio melts bent tones from violin, cello and bass together with constant shifts between clarity and utter chaos. Ståle Liavik Solberg comes from Norway to join Fred Lonberg-Holm for a stripped outfit that welcomes the kind of aesthetic rip brought on by rock, all the while offering a decidedly dark take on jazz.

S.L.U.M. Fest 2015 Saturday, June 27 2720 Cherokee Performing Arts Center 1 p.m. | $10-$13 By Daniel Hill The St. Louis Underground Music Festival -- also known as S.L.U.M Fest by acronym aficionados -- really should require no explanation at this point. Now in its sixth year, the event is the largest hip-hop festival in the region, with over 70 performers celebrating all four elements of the genre in a twelve-hour time span. Yeah, that's right, four elements -- graffiti artists will be doing live displays and breakdancers will be tearing up the dance floor alongside the event's emcees and DJs, making for an all-inclusive affair.

Weird Al Yankovic Sunday, June 28 Peabody Opera House 7:30 p.m. | $26-$56 By Daniel Hill It seems crazy to think that Weird Al is presently at the top of his game -- the celebrated parody performer is usually thought of as an '80s relic, albeit a beloved one. But at age 54, just shy of 40 years into his career, the man born Albert Matthew Yankovic just released his first No. 1 album, July's Mandatory Fun. A deft marketer and skilled director, Yankovic achieved this feat thanks in part to a well-received viral campaign in which he released eight music videos in eight days, proving that his chops are just as sharp and relevant today as they ever were.

Wretched Worst w/ Kingston Family Singers, Veil Sunday, June 28 CBGB 9 p.m. | $5 The Lexington native Wretched Worst recalls the short-lived '90s blend of violent noise paired with guitar-laden thrash. Groups like Black Dice would gnaw through speakers while throwing beer bottles at the crowd, point blank. No wonder that trend died, what with the liability attached with booking such a band. Wretched Worst feels like less of a callback and more of a rebirth, funneling that sound of ill will into a sordid punk rock fever -- only with less blood and more sweat.