A Thriving Studio Scene Is Giving St. Louis Bands More Options Than Ever 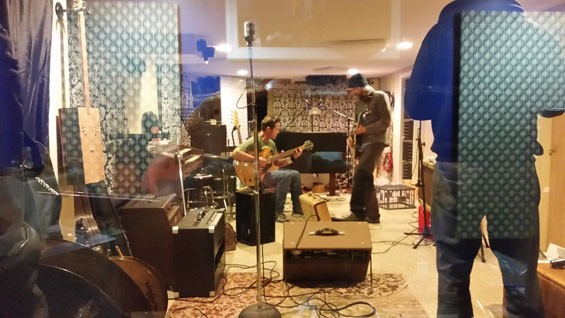 Bands looking to record are finding more options than ever in St. Louis' thriving studio scene — and sometimes opening spaces of their own

Thanks to advances in technology, it's easier and cheaper than ever to record music on your own. Local bands such as Whoa Thunder and Apex Shrine have made great-sounding albums that were mostly, if not completely, recorded in the homes of their members.

But by that same token, it's also easier and cheaper than ever to open your own studio — a place to record your work, as well as that of other bands. Perhaps that's why a new crop of studios has popped up in St. Louis over the last twelve months.

Troubadour Dali frontman Ben Hinn opened Mound Sound Studio in the basement space under Go Music on Delmar in late 2014, while local band Shark Dad raised $1,605 through a crowdfunding campaign to build Moon Jr. Studio. The space, a fully renovated studio that drummer Shawn Manny runs out of his basement, is where the band recorded its debut album, A Bigger Boat. Manny is putting a few finishing touches on Moon Jr. before opening its doors to the public. (Singer and RFT contributor Jason Robinson estimates it will happen "before summer's out.")

Meanwhile, existing studios both young and old are packing up for new digs. Suburban Pro Studios made its much-anticipated move from Florissant to its new south-city home on Jefferson Avenue. Native Sound Recording bounced around Cherokee Street and upgraded from an open space to a more controlled, professional studio environment (its higher rates reflect the studio's better quality). SLAM Productions has put its equipment in storage, but plans to move to an upgraded space soon, possibly on Hanley Industrial Court in Clayton.

Despite the increased competition, most of the city's studios have stayed in business. One notable exception was Smoking Baby Studio, which operated in the basement of the building that once housed Apop Records. Owner Jason Hutto moved to Houston, and while he suggested in an interview with Riverfront Times that he'd continue recording in the Lone Star State, he started selling his equipment before he moved.

Most other established brands in town are still going strong. Firebrand, Sawhorse, Phat Buddha, Shock City Studios, Utopia, BSRG and countless others are holding steady. Smaller nearby towns have their own options (see Bird Cloud Recording in Edwardsville, Illinois, which is run by occasional RFT contributor Ryan Wasoba).

Relationships are friendly. It's not uncommon to see different St. Louis studio leaders discuss their work and lend each other equipment and expertise. One studio owner recently tagged his counterparts in a Facebook post asking to borrow a cable; plenty responded that they were happy to help. Glenn Burleigh of BSRG and David Beeman of Native Sound also spent a free Sunday doing a "shoot out" — a process where the two tested mics through the same inputs to compare their quality. These cordial relationships have fostered an environment that Hinn says is welcoming.

"I have several engineer friends who are always willing to give me advice and help me out," he says. "Competition or whatever is part of the game, I guess, but I feel like it's pretty friendly overall."

And musicians moving into the studio arena see a real payoff. Both Hinn and Manny say that having a studio has changed the way they approach making music, even though their experiences couldn't be more different: Hinn's busy schedule has him working on other acts' music more than his own, whereas Manny has found that his studio allows his band greater creativity. They've taken to recording practices — and sometimes, they like the innovation they've captured.

"We could go back and listen to it and those random, spur-of-the-moment 'Hey, I want to try something [moments],'" Manny says. "Whether it's a guitar lick, bass lick, maybe a certain drum pattern that you try once, everybody sits down and listens to it the next week and goes, 'That really worked.' Or maybe just, 'Cut this, trim that, it seems a bit dry.'" Room to experiment, room to create: These days, St. Louis studios can provide plenty of both.

See the rest of our Music Issue:

How the Grove Became the City's Hottest Neighborhood for Live Music