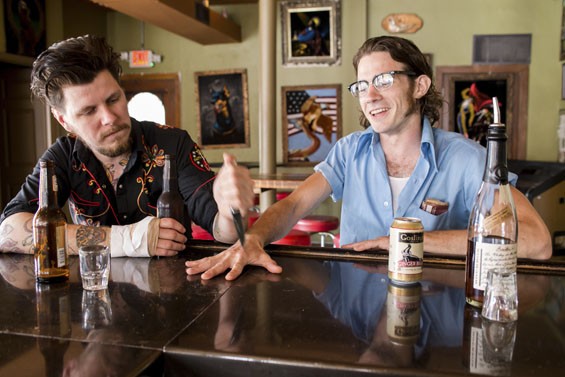 While the dark, sparse tracks on Tortuga's first EP, West of Eden, were mostly written by Leahy, the album itself is far from a solo effort. Leahy is backed by an assembly of artists hand-picked from the local label Big Muddy Records, with members of Pokey LaFarge, Rum Drum Ramblers, Loot Rock Gang, the Hobosexuals, Arson for Candy and Jack Grelle's band all lending their talents.

Tortuga - When I Go from Tortuga on Vimeo.

West of Eden also has a silent collaborator: Exene Cervenka of the legendary punk band X. Leahy worked with Cervenka when 7 Shot Screamers backed her as the Original Sinners.

"I got a random letter in the mail from Exene sometime after 7 Shot had recorded with her," Leahy explains. "It had about five pages of lyrics and random lines and phrases, along with a note saying, 'I wrote these lyrics and think you could use them.' That's what really sparked all the Tortuga demos."

Leahy initially tried to put together a band while living in LA, his home for the last five years, but he says he could only think of musicians from St. Louis.

"St. Louis seriously has an embarrassment of riches when it comes to talented musicians," he explains, "and we had a great time recording the songs."

Before moving back to the Gateway City, Leahy sent his demos to Chris Baricevic, captain of Big Muddy. Baricevic said he liked the songs' "spaghetti-Western" sound and quickly got on board.

Tortuga is not the first project on which Leahy and Baricevic have worked together. When Baricevic was just nineteen years old and his label was still in its infancy, he put out 7 Shot Screamers' last release, In Wonderland. He had admired the band since first seeing an in-store performance at Vintage Vinyl.

"They were the coolest," Baricevic says. "We thought 7 Shot was it. Mike took us under his wing. He was a hero, for sure. All the Johnny Thunders, Iggy and the Stooges, Velvet Underground, Mc5 I heard [through him]. Hanging out with Mike Leahy was like, rock & roll high school — for real."

"Chris was very interested in working with us and let us do whatever we wanted, which is why In Wonderland became the album that it is," Leahy says. "I don't think that would have been the case if we stayed the course with [Haunted Town Records], or any other label, for that matter."

The concept of Leahy's Clownvis Presley character emerged from another collaboration of sorts between Leahy and Baricevic. Leahy was trying to figure out how to make money between tours and told Baricevic that he wanted to be a clown or an Elvis impersonator. Baricevic replied, "Why not both?"

"I literally hung up the phone and put together Clownvis for the first time and never looked back," says Leahy. "I've never been the best magician, and I was too young and wiry to be an Elvis impersonator. So I took the Elvis voice and the bad magic and half-assed clowning and put them together."

During Leahy's time in LA, Clownvis really took off, thanks in part to an infamous appearance on America's Got Talent on which he goaded both Sharon Osbourne and Howie Mandel into telling him to "fuck off" on national television. Leahy considers it some of his best work. Though the comedy scene of LA was fertile ground for Clownvis, he found the music scene to be lacking.

"There is no comparing the St. Louis music scene to the scene in LA," he says. "There is absolutely no roots in any music, outside of Mexican culture. Not that I could find, anyway. There is no raw passion, and everything is far too contrived. I would go to shows occasionally and just stand there thinking, 'Have any of these people ever been to St. Louis? Or any rock & roll city?' They simply don't know how it's done out there."

Tortuga is in good company at Big Muddy, with its roster of country-leaning artists steeped in roots music. Plus, it's full of musicians who grew up listening to 7 Shot Screamers.

Touring might prove difficult with so many members involved in other projects, but that won't prevent Tortuga from playing live shows. The lineup will change based on whoever is available.

"I think that will be part of the magic of Tortuga," Leahy says. "If it came down to it, I could do a show completely solo, or with just Chris on keys, or as a three-piece, or so on."

The collaborative, integrated spirit in which West of Eden came together was very natural, he says. "It was just the guys that were the best, and the people we wanted to be around and record with. We've all known each other for over a decade now, so its been a long time coming to all work together."

He adds, "I do love the sound and want to take it further, because songs like this can really pour out of me, if I let them."