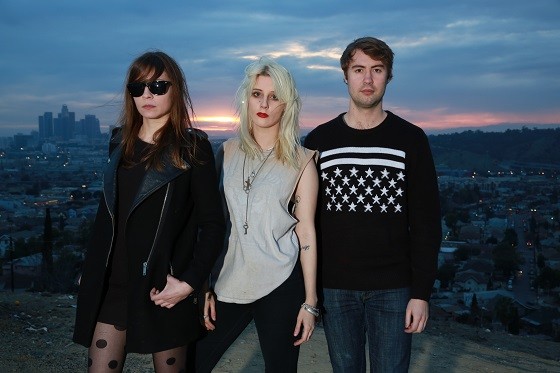 It has been almost exactly a year since Mish Way and her bandmates in White Lung released their third album, Deep Fantasy, but Way isn't the retrospective type. She's already looking forward to new things -- to a new record and a new collection of songs to pull from on the road.

Way hopes to start recording the new album in the fall, but before she can dive into that, she has one more tour. When we reach her on the phone, she is on her way from New York to D.C., getting ready for a nine-day, nine-city stint that will take her from the East Coast to the Midwest before winding back east to New York and Boston. The band will hit St. Louis tonight with a show at the Demo. It's an exhausting itinerary, but Way isn't complaining. This is what she signed up for.

Still, there are times when Way dreams of escape. Earlier this year she wrote an essay for Somesuch titled, "Going Up the Country: Why I Want To Abandon My Career."

"I have this fantasy for the future," the piece opens. "It involves moving far, far away from the city, dropping my job as a writer and ditching my musical career. I keep my husband though."

In the essay, Way fantasizes about calm and isolation. She imagines a life without cell-phones or Twitter, one where Lindsey Lohan writes long blog posts about her "wants and fears." In the fantasy, Way keeps a garden ("something very Martha-Stewart-magazine") and lets the imaginary neighbors babysit her imaginary pet dog. It is a simple fantasy and a relatable one, but Way says that amongst her peers, the kind of domesticity that she dreams of is frowned upon.

"My fantasy for a rural, simple future is considered grossly basic in my peer group, because educated, feminist women like myself are supposed to want more," Way writes. "The seemingly old notion of normalcy that everyone I surround myself with violently rejects has suddenly become the alternative. Maybe that's why I want to get off the Internet and into the rural?"

Way says that she was drunk and feeling sorry for herself when she wrote the essay for Somesuch. She says that at first she was nervous to publish the piece, but that once she did, she was overwhelmed by praise from friends and strangers alike.

"At the end of the day, we all want to fall in love and get the fuck out of this over-congested, stupid city," she says. "As a strong feminist woman you're not supposed to want that, but why can't I want that as well? Why can't I want both things in my life? I don't understand."

In both her music and her writing, Way pushes back against standard views on gender roles and feminism. She has written extensively about her personal experience as a woman in a male-dominated music industry, and has repeatedly challenged media narratives that label White Lung as a "girl band."

She doesn't shy away from confrontation, and doesn't hide her fears or vulnerabilities. On Deep Fantasy, her lyrics explore issues of gender politics, rape culture and drug use. Her vocals are wild and gritty, a menacing combination of poppy hooks and frantic screams. "Your name in my arm / Burn it fast or he'll take your charm," she yells over a spastic guitar riff on "Wrong Star." "I'll scream, I'll hurt for you / I'll break the glass, kill that girl, swallow two / You tell me."

Way's lyrics are confrontational, but they are also cryptic. She says that her songs resemble her childhood diary, filled with jokes and references that only she understands. Sometimes it is hard to decipher any true meaning from her lyrics, but the sentiments and emotions are hard to miss.

Since Deep Fantasy was released to critical acclaim, Way has spent more time than she would care to explaining herself and her lyrics to the media. Rather than letting the songs speak for themselves, she has been asked time and time again to explain their meanings.

"It gets exhausting when you're constantly repeating a story," she says. "You start to wonder, 'Am I just saying this over and over because that's what I've told myself the song is about, or is that really what its about?' There are certain songs that you write out the lyrics, but then you don't really figure out what you're talking about until a few months later."

As White Lung prepares to get back into the studio to work on the new album, Way is excited to explore new tones and styles. She says the record will feature more complex dynamics and some slower tempos, but the band won't stray too far from its trademark sound. As for lyrical content, she says it is still too early to say what she will write about, but that she is approaching the album with a clear head.

"I just want to make a record that is interesting and challenges us and what we do," Way says. "We're trying to do things that we don't normally do. It gets boring doing the same things all the time."