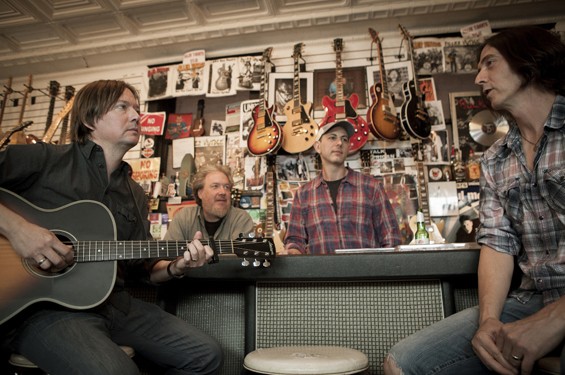 While its final album, 2003's Strange Seasons, was released on the Los Angeles-based label Trampoline Records (which had the backing of singer-songwriter Pete Yorn and then-Wallflowers, now-Foo Fighters keyboardist Rami Jaffee), it didn't quite set the world on fire. After a grueling West Coast tour, the band called it quits, and its members scattered to other projects, other bands and other cities.

So while the spring announcement of a reunited Nadine was cause for celebration, it was quickly undercut by tragedy. The sudden and shocking death of bassist Anne Tkach in an early-morning house fire on April 9 is still keenly felt throughout the St. Louis music community — her reach, influence and spirit were each vast. But many music fans were first introduced to Tkach during her stint in Nadine; she was a bassist with swagger and bottomless reserves of cool in a band that could tend toward the cerebral. The announcement of the group's reunion shows, which was posted shortly before her passing, put into relief her impact on the group.

The lineup for Friday's show will be a mishmash of various Nadine members from the group's six-year run: Singer/guitarist Adam Reichmann and guitarist/keyboardist Steve Rauner, the band's ballasts, will be reunited, along with founding member Todd Schnitzer on bass, Jimmy Griffin on guitar and Merv Schrock on drums. It will mark the first performance in which these five players have shared the stage together, combining to form a kind of Nadine continuum that represents the band's many iterations and styles.

Over drinks and BLTs on a Central West End patio in mid-May, Reichmann tempers his excitement at reuniting the band with the emotional burden of carrying on without Tkach. "It's gonna be a heavy experience because she poured so much of herself into the band," says Reichmann. "We were really looking forward to getting back together, because things with the band ended abruptly, and I hadn't seen her in some time."

Reichmann describes Nadine as occupying a "rich seam of cross-genres" between power-pop and alt-country; certainly, many listeners drew comparisons to REM and early Neil Young, particularly in Reichmann's yearning vocals.

"At the same time, it's hard to market that," he says of the band's difficulty in breaking out of St. Louis.

"The timing of our band was really unfortunate, because we were in between the collapse of the music industry and the ability to self-promote wasn't as easy — all the tools hadn't been built, except for MySpace," Reichmann continues. "No one even had Facebook. I'm not sure what that's doing for younger bands now, but we were right in the crack of that whole divide."

Nadine's dissolution, like many band breakups, was not without its bruises. Reichmann calls the group's 2004 West Coast tour "the nail in the coffin" — it had become clear to him that after six years of pushing, Nadine was unlikely to grow in popularity.

"People kind of stopped talking to each other after that. When you're in a band, that's the main way you know one another," he says.

Whatever disappointment the group experienced in its final run has faded; Reichmann speaks of Nadine's many successes and personal triumphs with gratitude. He recalls monthlong European tours and rabid German audiences alongside the band's 2003 album-release show at Mississippi Nights, which ended with a bagpipe-aided cover of AC/DC's "It's a Long Way to the Top (If You Wanna Rock & Roll)." Not a bad piece of rock excess for a band originally sprung from the fertile minds of Wash. U. undergrads.

After the split, Reichmann played a few solo shows but mostly pursued his interests in video and photography. Rauner moved to Portland, Oregon, while the rest of the members followed their own musical paths. Griffin, already an in-demand guitarist when he joined Nadine, founded his own group, the Incurables. Schrock had left Nadine after the recording of Strange Seasons and re-emerged several years ago as the emphatic frontman for the soul-rock combo Ransom Note. And Tkach's membership in other bands would tax this article's word count, but her low-end prowess and plaintive vocals were a vital part of bands including Rough Shop, the Skekses and Magic City.

"We were really looking forward to reconnecting on some other levels," Reichmann says of the Twangfest offer. "When I say that everybody was on board with us dismembering the band, it was kind of abrupt. Getting back together with everyone again is certainly a nice part of the deal."

Reichmann suggests that "midlife crisis" is one reason for the reunion, though he says he relished "the opportunity to connect with Anne, connect with Merv, connect with Jimmy — folks that we just, frankly, missed."

Tkach's death initially appeared to scuttle the plans for Nadine's reunion, according to Reichmann. "I think our initial reaction was that we weren't gonna play the gig, and we had talked to the organizers about donating our slot or using it as a way to memorialize Anne," Reichmann says. "It was really confusing — her death was very confusing to wrap our minds around anyway — so how it related to us, I had no idea.

"Over time, as we had more conversations about it, there seemed to be a strong pull from people who knew her well that said, 'Hey, you gotta go, and you gotta play this show, because that's what Anne would want you to do.' It's hard to feel differently about that — not just when people are telling you that, but that's what I feel in my heart too."

Reichmann and Rauner speak of Tkach's role in the band both as a bassist and as a creative catalyst. She joined the group after the recording of its first two releases, Back to My Senses and Downtown, Saturday.

"My whole thing with Anne is that she pulled the stick out of Nadine's butt — and it was a big stick," Reichmann laughs. "She had so much groove and was so funky."

In a widely circulated Facebook post after Tkach's passing, Rauner called Tkach "our rock-and-roll mama bear. We had already put out a couple of records, but in my opinion Nadine did not become a band until Anne joined us."

When asked if any songs have been particularly hard to sing in light of the loss of his bandmate, Reichmann takes stock of Nadine's whole catalog.

"We have a lot of songs that were about loss and about disconnection — it was a pretty melancholic band at times," he says. "I was playing 'Rocking Chair Song,' and I think I wrote that song about somebody else who I knew I was gonna be separated from for a long period of time, and I was thinking about, 'Hey, one day this is all gonna be over, and we're all gonna laugh about it.' And that almost takes on a spiritual dimension thinking about Anne in that context.

"I don't know if this is my mind playing tricks on me, but I almost think that I wrote that song about Anne, way back when," Reichmann continues. "But that sounds completely preposterous. In my mind somewhere I have the feeling that some component was reflecting my relationship with Anne, at some point, and just playing it back just feels like it was totally written about her."

A month out from the Twangfest show, Reichmann sounds ready to take his place fronting his old group. "I miss singing — a lot. I've never been a super awesome guitar player, so that for me has always been remembering where things are and rocking out with everybody," he says. "But the singing part is a whole other side of my brain and my physical self. When we started practicing, I thought, 'Man, this feels physically good to sing.'

"It's been emotional going back, and it all takes on a different character," Reichmann adds. "In a way that's been good for me, because I sort of suck at mourning — to have songs and all these shared memories to express is pretty awesome."