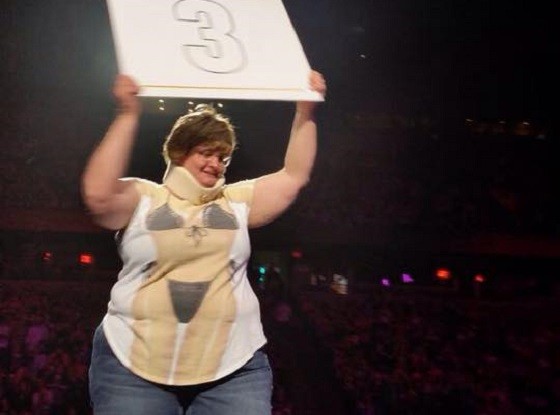 So when the seasoned Internet troll attended the recent NKOTB concert at Scottrade Center in late May, she had a hilarious idea.

See also: "Aunt Claudette" Is A Proud Troll We Can't Help But Love

"The New Kids On the Block tour that they're doing with with Nelly and TLC, it sort of has a boxing theme, I guess, and they use a ring girl at each show to do round one, two and three," Higgins explains. "When I saw them in St. Louis, I just noticed the girl walking and nobody really paid attention, I didn't think."

With each of the three acts on the bill serving as a "round," organizers grabbed volunteers from the audience to serve as "ring girls" -- walking across the stage and holding a sign denoting which "round" was starting, in the grand boxing tradition.

That participation came with a price.

"They picked them out of the people that are sitting on these bar stools that are on the stage," Higgins says, "and they paid like $1,000 for those seats. Which is ridiculous."

Unwilling to pony up a grand for the privilege, but devoted as ever to her favorite boy band, Higgins hatched an idea. She's been trolling the internet with her "Aunt Claudette" character since 2007, taking down Target for perceived fat-shaming, claiming to be Justin Bieber's outraged aunt and even waving a giant floppy dildo at Larry Flynt outside of Hustler Hollywood -- all while speaking in a Southern drawl and sporting a neck brace. "I didn't think I would get any viewership just by talking like most of the people were doing," Higgins told Daily RFT of her early trolling efforts in an interview last year. "So I had to do something crazy."

Since debuting the character, she has amassed an army of fans -- especially on her Vine account, which has more than 40,000 followers.

After seeing the NKOTB show in St. Louis, Higgins already had plans to attend its show three days later in Grand Rapids, Michigan. Claudette, she thought, might help get her a ring girl gig.

"I just thought, 'Well, I am just going to make a video and see if they'll pick me.' Just to do it, just because I thought it would be awesome, first of all, to be in character and do it," she explains.

The resulting short film has all the drama and suspense of a big-budget summer blockbuster, if only said blockbuster centered on a woman wearing a wig, neck brace and "bikini girl" T-shirt.

"See, a lot of the girls in the New Kids On the Block Twitter world know about Aunt Claudette, because I've made other videos that are related to New Kids on the Block," Higgins explains. "So everybody started to retweet it, and Jenny McCarthy retweeted it."

McCarthy, of course, is married to Donnie Wahlberg, aka NKOTB's resident "bad boy."

"So when she tweeted it, I was like, 'I know he is going to see it.' Then the following morning he tweeted, 'The neck brace is coming soon,' and then linked my video," Higgins says. "But nobody had contacted me yet, so I really didn't know like if it was going to go down."

Higgins and her sister were planning to travel to Grand Rapids regardless. So when NKOTB's people finally got in touch the morning of the show, they were ready to roll.

Upon arrival she was briefed on what would be expected from her on stage. One of the security guards on the scene recognized her from her videos and brought her to the New Kids' dressing room for a meet and greet.

The #Neckbrace is in the building!

"They had me come back and took some group pictures of me with a bikini shirt on, and Donnie Wahlberg said, 'Did they tell you what they are going to do before you go up?' And I said, 'No,' and he said, 'You just wait,'" Higgins explains.

To her great surprise, the video that she had made just days prior was played on the stadium's jumbo screen immediately before her turn as ring girl.

This was my world's greatest moment. My sissy is a superstar❤

"It's ridiculous and hysterical, but at the same time it was like a dream come true, even for the other girls that are what they are called 'blockheads,' because they all really wanted it to happen as much as I did," Higgins says. "So to have them follow through and actually do it -- and then play the video -- was just so incredible."

Courtney Stabler was one of those excited blockheads in attendance. She first became aware of Aunt Claudette through Donnie's tweet.

"I thought it was cool that she was so creative in her request, and excited she was going to be at the show I was going to," she says. "I started following her on Twitter to keep tabs on her to see if she got her wish. Since I had front row seats, I took a picture and sent it to her. I thought she might enjoy seeing it."

"The best part about the whole experience is that I kind of just made it on a whim, just hoping that it would happen, and it actually happened," Higgins says. "That it got their attention and they wanted me to do it, and they were just as excited about it as I was."

Most impressive? Higgins was able to achieve something that would cost most people a pretty penny through sheer creativity and force of will.

"That's really all I have, because I don't have a lot of money," she says. "So I have to use something else."