The Best Concerts in St. Louis This Week, June 8 to 14 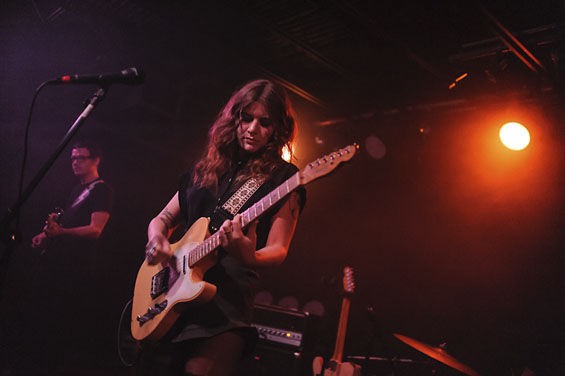 Humidity is already in the air, our lungs and every cramped show space in town. While some struggle to breathe, others succumb to their sweaty fate and embrace the heat that comes with summer in the river city. Great concerts aren't exactly the best way to cool down -- quite the opposite -- but they do help us all cope with the dog days to come.

It's not impossible to lead a jazz band from behind a drum kit -- just ask Ark Blakey -- but it does take a certain kind of selflessness to drive the beat while giving a platform to your instrumentalists. Drummer Kaleb Kirby is the leader and chief composer for the new jazz sextet Animal Children, and while he's done time with swing-oriented jazz as part of Tommy Halloran's Guerrilla Swing, he brings a certain expansiveness to his own compositions. Kirby keeps a firm grip on the sway of these songs, but local jazz-scene veteran Adam Maness is a key architect here -- not just as an elder statesman in a troupe of relatively young guns, but as the hands behind the Fender Rhodes electric piano. That instrument's plinky tone and muddy depths immediately call to mind everything from the proto-smooth-jazz of Bob James to the fusion experiments of Return to Forever to the barbed mellow of Steely Dan. And Maness references those traditions while helping establish the band's place in the modern jazz tradition -- albeit with a few detours. The stop/start dissonance and low-end distortion of "Stay Golden" show the group's comfort with rock dynamics, and "oh-we-ah" starts the album with the kind of brassy pep that would be hard to sustain over a whole program. But as the self-titled album progresses, Animal Children is content to let the songs breathe, playing catchy and kinetic choruses as a unit before allowing its players to step forward individually.

Pattern Is Movement Farewell Tour w/ So Many Dynamos Tuesday, June 9 The Firebird 8 p.m. | $10-$12 By Christian Schaeffer Long-time fans of the Philly duo Pattern Is Movement may have fallen for the group during its math-rock beginnings, but the band's most recent work has pushed its sound into electro-soul -- and that's not even counting the band's cover of D'Angelo's blowjob opus "Untitled (How Does It Feel)." Not unlike a narcotized version of Chromeo, drummer Chris Ward and keyboardist/singer Andrew Thiboldeaux use soul grooves, rich keyboard tones and modulated vocals to spin their songs into syrupy, intricate webs. 2014's self-titled LP will be the last we hear of PIM on record: This tour will be the band's final go-round, so see it now or gnash your teeth later.

Best Coast w/ Bully Wednesday, June 10 The Ready Room 8:30 p.m. | $20 By Daniel Hill Released in May, Best Coast's latest album, California Nights, builds on the dream-pop promise of previous releases, but its status as the group's major-label debut pushes it out of lo-fi territory and into that of a full-on pop album. Endless layers of shimmering, fuzzed-out guitar accompany Bethany Cosentino's distinct vocals, while driving drums keep the affair rooted firmly in rock & roll. Aside from the glossy production, not much is different for Best Coast, whose formula has gone largely unchanged in its six years of existence. But that is just as well -- if it's not broken, why fix it?

Voodoo Glow Skulls w/ Slow Children, the Timmys, Captain Dee and the Long Johns, Snooty and the Ratfinks Thursday, June 11 Fubar 7:30 p.m. | $13-$15 Daniel Hill You do know that ska is making a comeback, right? The same twenty-year cycle that so often brings forgotten trends roaring back into our collective consciousness is to blame -- or thank, depending on your opinion about upstroked guitar chords and wind instruments. Luckily, Riverside, California's Voodoo Glow Skulls has been rendering even the impure, punk-damaged version of the genre more than listenable ever since the late '90s, when the oft-derided third-wave subsect of ska dominated the airwaves. Now 27 years in and with more than 1 million records sold, the sextet the Casillas brothers built shows no signs of slowing down.

Read on for more great shows happening in and around St. Louis this weekend. FRIDAY, JUNE 12

The Meatmen Friday, June 12 Fubar 8 p.m. | $12-$14 By Daniel Hill Last year, the Meatmen released its first full-length of original songs in eighteen years, aptly named Savage Sagas from the Meatmen. The nineteen-track affair dabbles in all the same irreverent shock the veteran punk group is known for, with lyrics about sexually transmitted diseases, strip clubs and fistfights scattered throughout. A cursory look at the tracklist tells the tale succinctly; songs with titles including "The Ballad of Stinky Penis," "Rock N' Roll Enema" and "Big Bloody Booger on the Bathroom Wall" convey the band's smirking approach before one even hits play on the stereo. Socially conscious music is all well and good, but sometimes you just want to listen to some good ol' fashioned punk songs about poop and boners. Fortunately, the boys in the Meatmen have got you covered.

Nneka Saturday, June 13 Blueberry Hill 8 p.m. | $18-$20 By Roy Kasten With the release of this year's full-length My Fairy Tales, Nneka Lucia Egbuna has demonstrated that, at the age of 25 and past the point of anything resembling buzz, she is among the most compelling and political artists in contemporary worldbeat music. From the Stevie Wonder-esque soul-ska of opener "Believe System" to the hard-hitting dub of "Local Champion," Nneka has fully embraced a panoply of reggae styles, channeling them in both exhilarating live performances and mind-bending studio productions. The sounds always rock; the messages always stick.

Lions w/ Messes, Lobby Boxer, Supercousins, Bike Path Sunday, June 14 Foam Coffee & Beer 8 p.m. | $5 By Joseph Hess As with any musical movement, very few bands get proper credit, only to be seen as hangers-on. While Lions doesn't bask in the limelight, its spot is firmly off-center, sporting an off-kilter take on alternative rock. The sound is a sparkling bomb of noodling riffs amid jazz-obsessed beats. While the vocals lean on glossy pop sentimentality, the voice fills in subtle gaps, making for pure, refined sing-songs that aren't scared to dive off the deep end. Don't expect a new full length, as Lions is still in the crowdfunding stage -- now is your chance to help make that record a reality.