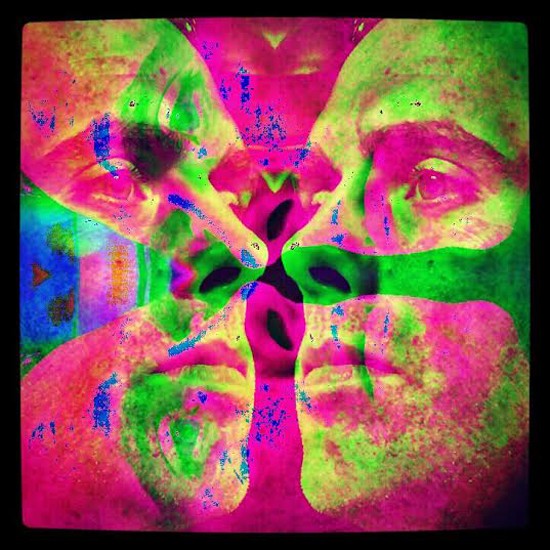 Read more about Demonlover in our review of 2014's Moody Future:

At this point it is simply a matter of biography to note that Andy Lashier, JJ Hamon and Sam Meyer first played together as part of the late, lamented Theodore. Only the faintest molecules of their old band inform Demonlover's splatter-paint style: As multi-instrumentalists, Lashier and Hamon brightened the corners of Theodore's story-driven folk songs with bursts of brass, keyboard and spirited backing vocals, but that was a few million miles away from Moody Future's pantheistic pop. Take closing track "Ate a Cicada," which finds Lashier reciting a sing-songy couplet over deep-space synths at an increasingly manic pace.

In the three years of Demonlover's existence, the band has taken experimentalism not only as permission to muck about with a variety of styles, but to exert some kind of mastery over them. The light-touch, melodica-driven dub of "3500 Spring"/"Annie Got Mad" would sound like some white-dread Venice Café nightmare in any other context, but coming between gibberish boogaloo "Shimmy Shimmy Ya" (not an ODB cover, sadly) and the crust punk/nursery rhyme mashup "Counterattack!!" leaves the song sequence seemingly random but, at least, consistently incoherent. That Demonlover is only physically releasing this album on cassette (alongside streaming/digital) suggests a stylistic fluidity between, and often within, tracks.

Read more about Eric Hall in this 2014 interview:

Experimental musician Eric Hall's curious obsession with sounds began at a very early age. Technically, his first set up consisted of a mishmash of manipulated cassettes and turntables. He'd scratch his Smurfs records with gravel to bounce the needle, record his neighbors splashing around in a pool outside his window and would then play all these noises together, recording them on his dad's Dictaphone.

Over the years his tool set grew to include everything from Moogs, reel-to-reels and CB and shortwave radios to toys, contact mics and all manner of effects. Even though some of the jargon associated with his equipment is enough to make one's head spin (e.g. Ableton Live 9 with Max 6 on a 2012 MacBook Pro with Keith McMillen QuNeo and Akai APC40 and MPD32 controllers), he stays true to his simple, inquisitive nature.

Read more about Travis Bursik in this preview for 2014's Slow Milk:

"Some people don't see the appeal of drone, and it's true it's not always compelling listening. Still, it affects you. Think about the sound inside a pressurized airplane cabin, or the way things sound underwater, and you'll know what I'm getting at," says local artist Travis Bursik. Armed with a guitar and a few components used to layer sound, Bursik molds music that might be best heard in tandem with meditation. And he has no illusions about this style of performance.