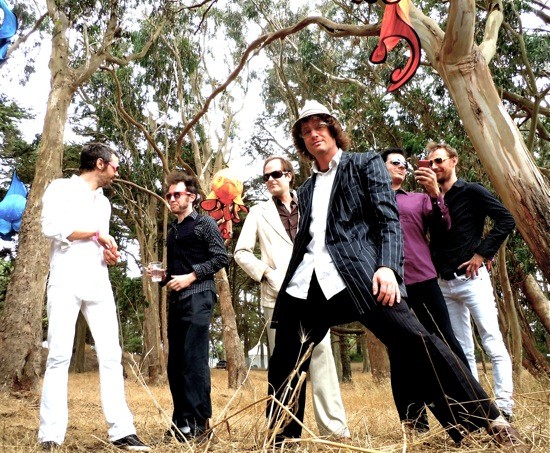 And the hits keep coming -- to the gut, that is. On Saturday, both Via Dove and Volcanoes perform live for the last time. Making a choice between the two will no doubt present a challenge for some, but keep in mind that the Volcanoes show takes place in a secret location while Via Dove crams its giant rock outfit inside the easily accessible Firebird.

Now decide on how much trouble you want to go through to get that rock & roll fix, you junkie.

Cody James Album Release Show w/ Maness Brothers, MusicEmbryo Friday, June 5 Foam Coffee & Beer 9 p.m. | Free For musicians, release shows are akin to birthday parties. Just like we, as a human race, tend to celebrate surviving for yet another year, bands like to celebrate actually lasting long enough to record and release songs. Cody James is set to debut the follow-up to his 2012 release Shades of Temperament, which is an alt-rock force of twangy guitar and wiry little riffs that get lodged right in the earhole. Voted Best Blues Band in last year's RFT Music Awards, the Maness Brothers open the show with a special guest performer.

Hands and Feet Birthday Show w/ Golden Curls, Caitlin Funston Friday, June 5 The Heavy Anchor 8 p.m. | $5 Remember when we mentioned that release shows are like birthdays for bands? This event is an actual birthday party! Underrated is thrown around all too often, but Hands and Feet merits the term. Despite releasing Sour Times, one of the best records of 2014, he's still a closely guarded secret in St. Louis. On this night, check out the one man machine of gloomy synth riffs as he collaborates with Golden Curls, all while bathed in live video art from Caitlin Funston.

Digital Leather w/ Shitstorm, Bort Saturday, June 6 Foam Coffee & Beer 10 p.m. | $5 Digital Leather revels in party-punk of the highest order. With enough jangle to rattle your eyeballs into a creamy white goo, the band strums its hyperactive chords in rough succession. Shitstorm beats the zombified corpse of the garage-rock horse that's been dead for years, and that's a good thing. Arrive on time for Bort, the new digs from members of Posture and the Brainstems, among other killer bands.

Monophonics w/ Alanna Royale Saturday, June 6 Old Rock House 9 p.m. | $13-$15 Monophonics brings soulful rock straight from the psych scene of San Francisco. The whole affair brings clashing vibes, some of which will feel too "hippie" for some, admittingly. Clean and free of any noisy debris, Monophonics shines with a glossy sheen, churning out polished songs designed specifically for ass-shaking.

P.R.E.A.C.H. w/ Zues, Damiou Williams, Doorway, 12 to 6 Movement, Juss Charlie and more Saturday, June 6 The Ready Room 7 p.m. | $6-$10 Nearly twenty artists share the stage for a full aural assault of heady rap at the Ready Room. Headliner P.R.E.A.C.H. rips through verses with a sharp flow, sporting fierce lyrics on top of busy backtracks that blow out bass-charged beats. Doorway, Zues and others join for this primer on homegrown hip-hop, all for a modest price (even cheaper with a student ID).

In reviewing the band's first release, 2008's Twilight, for this column, I heard a mix of amorphous, suggestive shoegaze and more square-shouldered rock. Any traces of softness were obliterated on 2010's El Mundo Latino, a KSHE-fired batch of strident rock & roll. On Fugue State, the original quartet added Mike Tomko (guitar) and Charlie Brumley (piano) to the mix; the expanded lineup flexes its collective muscles best on opener "You & Me Alone," with its twin-guitar riffage and minor math-rock syncopations. The song is a strong opener and shows what the band can do when it hammers out a tune but takes time to add smart, surprising quirks. To wit: Brumley's electric piano arpeggios, along with some synthy oscillations, give a shimmering backdrop to the closing song "So Deep," and coupled with Aaron Vaught's chunky, searching solo, the song stands as the clearest marriage of Via Dove old and new. When the tempo slows down, as on "Borderland," the band still sticks to rock conventions (hard-hitting drums, eight-bar guitar solos), leaving the song somewhere between The Joshua Tree and Slippery When Wet. Shadburne's vocals are strong when backed by swift musicianship but falter somewhat in the upper register here, though his expressiveness shows an intuitive link to the core of each song on this EP. Fugue State is further proof that Via Dove is a good rock outfit, and that's no small thing. Luckily, there are enough flashes here to suggest that it can be a restless, challenging rock band as well.

See also: Via Dove to Say Goodbye with a Final Show at the Firebird

David Liebe Hart w/ Tim Convy, Ben Johnson Sunday, June 7 Off Broadway 8 p.m. | $15 From inane skits on Tim and Eric Awesome Show, Great Job! to his puppeteering on public access television in LA, David Liebe Hart isn't quite a comedian, musician or spiritual mentor; he's an entertainer to the bone and works through raw art forms like punk rock to riff on religion, alien abduction and the importance of abstinence. Like a Sunday school teacher from an alternate dimension, Hart is many things to many people -- not to mention a master of Dadaism.

Electric Six w/ White Reaper, Tok Sunday, June 7 The Firebird 8 p.m. | $15-$17 While most know Electric Six for that "Gay Bar" song, the truth is that this band carries the torch of our rock forefathers (some of which are still alive of course, but not exactly in their prime). While Electric Six might actually be bigger in the U.K. than in the States, that doesn't detract from Detroit's sextet of sulfurous rock & roll. If anything, this band is more American than juicy hot dogs on Memorial Day. Get it? Got it? Good.