St. Louis' Volcanoes to Call It Quits This Week

See also: Volcanoes Are Breaking Up

To both the amusement and consternation of bassist/keyboardist/drummer Jon Ryan and drummer/vocalist Eric Peters, those are the scenarios that people most often imagine when they learn that the band is calling it quits this week. But life isn't always like an old episode of VH1's Behind the Music. Honestly, the guys assert, nothing but boring stuff is behind this breakup.

"It's more like somebody being on hospice for a year and then they finally die, and people say, 'Ah, it was their time,'" Peters explains.

Indeed, Ryan and Peters are facing the end with certainty, not sentimentality, saying that it's time to try new things. In a few days, Peters will move to Los Angeles as he and his new bride try to break into the modeling and entertainment industries there, while Ryan will continue building his reputation in the public-relations sector here in St. Louis with his wife. Their ventures as Adults with Things To Do simply brought about a natural end to Volcanoes.

"It's just slowly set in, and not just since we announced it -- pretty much since Eric has been engaged for about a year. It's nothing sudden," Ryan says.

Volcanoes' impending split has gained a bit of attention from local press and musicians alike -- quite a turn for a band that formed in 2011 simply to entertain friends at Lindenwood University.

Still, the duo's popularity grew, pushing Volcanoes into the local music scene and out onto cross-country tours. Ryan says that his band lucked out by forming when it did, enabling the men to make friends with members of Palace, Bo & the Locomotive and Dots Not Feathers, and setting up regular performance dates that drew big crowds.

"The St. Louis music community is really thriving, and I feel like we became a band right around the time it was really picking up, and it was energetic," Ryan shares. "There's a lack of a sense of entitlement here that some of the bigger cities have. There's no feeling that to play here, you need to put on a front or be more important than you are. It's like, 'OK, you want to play a show and be friends? Awesome.'"

Volcanoes eventually became known for putting on a spirited set with infinite danceability -- something that led the two to play the 2012 Budweiser Made in St. Louis concert at the Pageant, their favorite show thus far. Well, except for one small thing.

"That show was insane on so many different levels. It just went really well, with about 900 people there," Peters remembers. "But we got off stage and found that this guy had crashed his car into our trailer and smashed it up against the wall. Pretty big buzzkill."

"The trailer had been not just smashed, but pinned against the wall of the Pageant," Ryan corrects. "The guy got out of the car, immediately fell down and had a seizure..."

"Please. He was drunk as shit," Peters interrupts with an eyeroll. "Fuck that guy."

Despite the mishap, Peters and Ryan are ultimately the ones laughing. Ryan says that though the trailer was in bad shape, the duo used Gorilla Tape to hold things together -- a fix that has helped extend the trailer's life by three years and taken the band to Chattanooga, Omaha, Salt Lake City, Nashville and beyond.

"The plywood was bowed and cracked, and the metal was ripped. But pop some Gorilla Tape on it, and it's good," marvels Ryan, referring to the fix as "the tape job."

The storied trailer won't be following Peters to LA. Instead, it will end its time with Volcanoes after the duo's final show on Friday, June 5. Peters and Ryan won't divulge the concert's secret Jefferson Avenue location -- readers will have to email [email protected] for details -- but with Bear Hive, Thor Axe and 18andCounting rounding out the bill, the guys promise a complete blowout.

"The ideal party is 100 to 200 people who are all intoxicated, and all of those people live life as if there was no tomorrow during our music, which we play as loud as our amps will allow us," Peters says. "Um, and that no cops come."

"We really wanted our last show to take it back where we started, which was in a dorm room performing unbeknownst to the authorities," Peters continues. "We broke every rule." 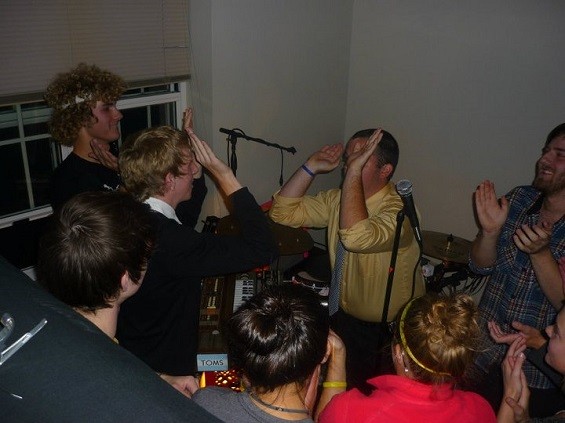 And never fear, Peters and Ryan say -- there's still a bit more Volcanoes music on the way. The duo plans to release a single and B-side with Afternoon Records on or around the final show date, with a song called "The Future You Had Planned" summing up the band's existence. But given the men's life changes, the music is evolving as well.

"We write songs that are about being out of love, about hating love. Now that I'm in love, what the hell am I supposed to write about?" Peters wonders.

"Our influences have changed a lot since we started the band. We both listen to a lot of hip-hop. I listen to a lot of Sonic Youth, Eric's been listening to Run the Jewels nonstop," Ryan adds. "We already have this framework of how our songs generally sound, but I feel like if we kept writing, we'd go into a decidedly different direction from Volcanoes."