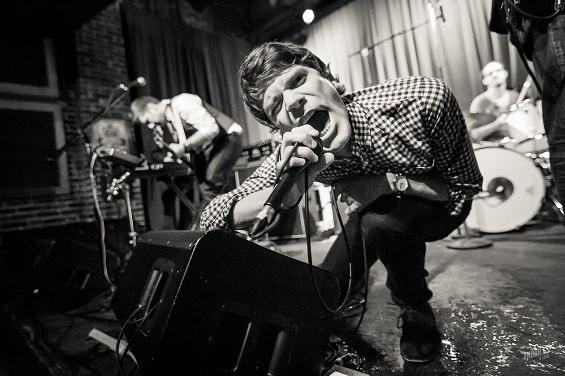 Coming from a band that recently announced its breakup, the public airing of grievances is perhaps no surprise. What may be, however, is the complete lack of acrimony from either musician as he tells the tale. Shadburne laughs as he compliments the guitarist for never missing a note, while Tomko, a giant grin stretched across his boyish face, recalls considering landing strategies even while still in mid-air.

With obvious mutual admiration and friendship between the two, you might wonder why they decided to make their June 6 appearance at the Firebird a farewell show. But Via Dove is a band that's known for its professionalism. Self-awareness, perhaps, comes with the territory.

"It really does feel like the right time," Shadburne says.

"It was an easy conversation to have," adds Tomko. "Let's end it now before it's too late to do it on our own terms."

The roots of what would become Via Dove trace back to Murray State University in western Kentucky. That's where Shadburne, a Louisville native, met Aaron Vaught, who would eventually become the band's guitarist. The two began writing songs in 2004, and when Shadburne moved to St. Louis in late 2006, Vaught followed soon after.

Through the pair's friendship with another Kentucky musician, singer Dustin Burnett of the October, they met Burnett's brother Reid, who would sign on as Via Dove's drummer. Bassist Mike North came next.

At the time Tomko was booking acts for the Bluebird (now the Firebird). His first impression of the band had as much to do with its music as its attitude.

"It's hard to find a band like that," Tomko says -- one that was, in his words, "solid, worked hard and nice."

Via Dove started to spread its wings around the time Tomko was putting together the first An Under Cover Weekend project in 2007. It has become a hugely anticipated annual event, and it turned out to be pivotal in Via Dove's development.

For the 2009 weekend, the band wanted to perform songs by the Rolling Stones; Beck was its second choice. Tomko, who disliked the Stones, wanted to go with the Beck idea until his Bluebird partner, Mike Cracchiolo, talked him into the Rolling Stones -- thanks largely, Tomko says, to Cracchiolo's faith in Shadburne's skills as a frontman.

Via Dove's turn as the Stones was a success, and it ultimately led to the band reassessing its identity. Though the group's members were ready to release an album, their tribute night reminded them of what they liked to play: fast and loose rock & roll.

They ended up scrapping most of the album. 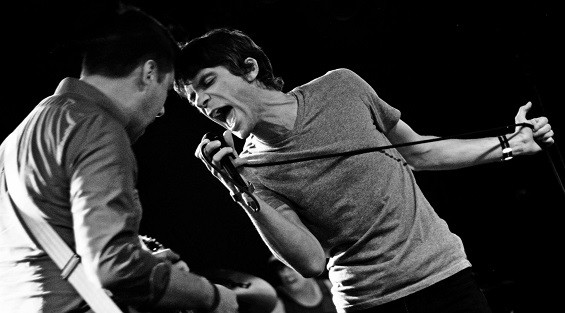 The music that would instead become the group's debut, El Mundo Latino, came together quickly over three four-hour sessions in the (now closed) Mexican restaurant that gave the album its name. In addition to a new sound, the songs also changed the group's live performances: Shadburne moved from singer/guitarist to dynamic frontman.

Shark Dad singer Jason Robinson remembers first seeing Via Dove during a battle of the bands. He was struck by how Shadburne filled his new role.

"I remember just being impressed by the energy and wild stage presence of Andy Shadburne," he says. "The whole band was on fire that night, but of course, the frontman is the one really lighting the blaze, and Andy always brought it."

Now that Shadburne was starting the fire up front, all the guitar work fell to Vaught. Though Tomko says Vaught can play the role of three guitarists, Via Dove enlisted him as a second player for the group's 2011 An Under Cover Weekend. This time, the group took on AC/DC.

As the former guitar player for Gentleman Auction House, Tomko wasn't sure how to find a new band. But after the AC/DC appearance, a band found him instead when Shadburne asked him to join Via Dove.

"I didn't know how to get into a band at that time, but what I didn't know was what I needed. I needed to be in a band that was supportive."

And that's what he found in his new band, particularly in Vaught. Though this paper named Vaught the city's top guitar player in 2014's Best of St. Louis issue, Tomko says he would sometimes defer the harder parts to the band's newest addition.

Before Tomko, Robinson recalls, "Via Dove was more along the lines of an indie band with these quiet somber moments who would gradually build to noisy." But with Tomko as guitarist, "right out the gate, they crank things up. I'm pretty certain Mike helped make the songs sound massive."

But the responsibilities of adulthood were on the horizon.

Since the band's inception, three of the members have had children. Drummer Burnett has started a Web development company. Bassist North has opened the thriving Blueprint Coffee. For a period, the business' demanding schedule required him to step back for a bit, so the band enlisted former Riddle of Steel bassist Jimmy Vavak to fill in until North could rejoin the fold.

Tomko, who says he's the "business guy," began to notice a waning response to texts and messages about upcoming shows and bookings. Late last winter the band members began discussing wrapping up Via Dove. That discussion inspired changes and a revitalized spirit.

"Even if you're not playing, you're still carrying the band around with you. It needs to be nurtured. It's like a Tamagotchi always beeping at you," Tomko says.

Once you stop thinking about it, he adds, "you realize it's fun again. If there's anything we wanted to preserve, it was to keep it fun."

For Shadburne, the band's musical legacy parallels the connections he has made in his adopted hometown.

"When I first moved here, I was enthralled with this place, and some of the people who lived here kind of took it for granted," he says. "The history here -- Chuck Berry, Tina Turner, the artwork -- it just hits you. You walk around, you drive on the streets, and it just hits you. Sometimes it takes a person from another place to sell a city to the outside world and its people."

Shadburne continues, "I would hope people look back at us and say, 'These guys loved what they did, worked really hard and ultimately became St. Louisans.'"